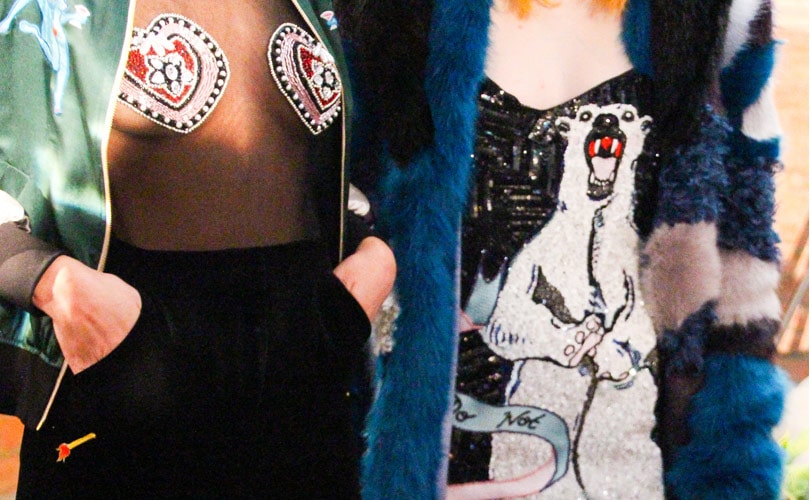 London Fashion Week has always been seen on the global fashion stage as a hotbed for fresh new talent, and the autumn/winter 2016 schedule was packed full of emerging designers looking to following in the footsteps of J.W. Anderson, Christopher Kane and Sophia Webster and become a global name. FashionUnited has picked out four talents that impressed during London Fashion Week:

Ravensbourne University graduate Clio Peppiatt has become one of the hot tickets of London Fashion Week thanks to her theatrical presentations, last season was a futuristic setting, for autumn/winter 2016 the designer created her own hotel, Motel Clio inspired by the undertones of films such as The Grand Budapest Hotel, The Shining and American Horror Story Hotel.

The collection itself is more sombre, in a darker colour palette of black, blue, purple and green, but still mixed in with the designers signature whimsically bold illustrations, from dancing women motifs to horseshoes, and retro matchbooks peppering the silhouettes. Each season the designer seems to create more wearable designs and for autumn/winter 2016 the Clio girl will be wearing silk pyjama suits, slips with frill detailing, bomber jackets, cashmere jumpers, faux fur, as well as divine sequinned party dresses, with the beaded Polar Bear dress being the showpiece, and the embroidery and appliqués such as the matchbooks and motel key fobs have been added across dresses, trousers and skirts.

Danielle Romeril launched her label at London Fashion Week with her spring/summer 2013 collection and has been brought to the forefront after being awarded NewGen sponsorship by the British Fashion Council. A graduate from Limerick School of Art and Design and the Royal College of Art in London, Romeril has broadened her experience by working with Sharon Wauchob in Paris and Sinha-Stanic in London.

Last season her 'Paradise Lost' collection was all about texture, featuring palm tree prints and layered monochrome pieces, for autumn/winter 2016 the designer took inspiration from an eclectic range of influences including a portrait of Isabel de Valois, Consort of King Philip II of Spain, the football scarf and stripes on cycling jerseys, as well as the cult Dutch 80’s nightclub Studio Paradiso, to make up what the Danielle Romeril girl will be wearing.

The outcome was a line up of cropped shirts with drawstring detail at the waist, mini scarfs tied over long white shirts, wide leg silky trousers with cut-outs to the knees, long, flared sleeves on tops, and a sporty parka.

Huge thanks to @topshop #NEWGEN @bfc @sarahmower_ for all there support this season and the previous three. Without you there would be no presentation. To @thewolvespr @stephenjameslawton couldn't do it without you. To all the #DRTeam and especially @katrina_howlett for making it all happen. To @nobutannawa @bunterbear @niamhquin @marimarilondon @meriel_hunt @morgan_odonovan I am so lucky to get to work with you!

Judy Wu is all about femininity and the strength of women and for autumn/winter 2016 the Central St Martins graduate was inspired by female aviation pioneers like Amy Johnson and Amelia Earhart to produce a strong, driven and beautiful collection that combined tailoring with fluid draping.

This is only Molly Goddard’s third season on-schedule at London Fashion Week, but the Central St Martins knitwear graduate has made a name for herself thanks in part to her wonderful presentation set-ups, for autumn/winter 2015 she placed her models in a makeshift art studio, complete with a naked model, and for spring/summer 2016 guests were transported to a make-believe sandwich factory.

For autumn/winter 2016, the NewGen supported designer, known for her chiffon princess dresses, put on a party with models dancing and twirling around the piano. Once again her collection is filled with whimsical dresses made out of reams and reams of tulle, but there was also satin slips, long-sleeved shirts and skirts. But it was her signature tulle gowns in black, white, pink, grey, and cream that captured editors attention.