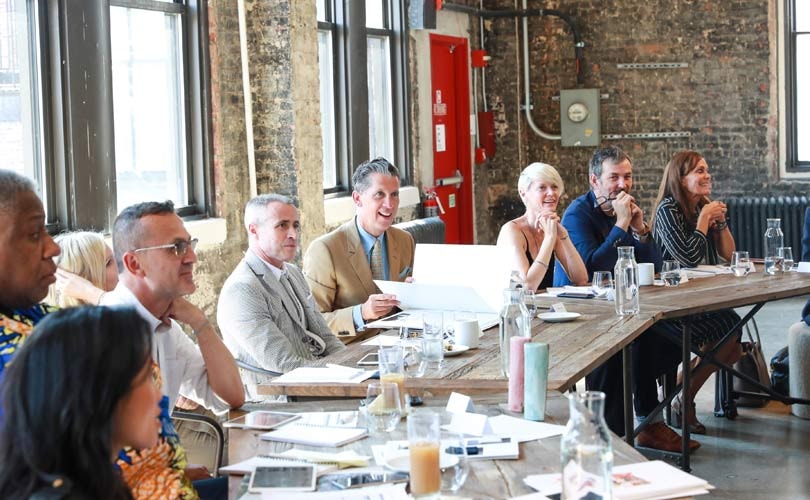 As I write, judges across the globe are deliberating on the regional winners of the International Woolmark Prize, a competition so extensive it is divided into six localities: Asia; Australia and New Zealand; British Isles; Europe; India and Pakistan; U.S.A. Nominating bodies here at home include Vogue and the C.F.D.A. and past winners have been Public School and Gabriela Hearst. This year’s judging panel includes André Leon Talley, formerly of Vogue, Stefano Tonchi of W Magazine, designer Thom Browne and Laura Brown, editor-in-chief of InStyle. In the words of the Woolmark Company, the “prestigious award connects the decision-makers of the future with today’s leaders in retail and trade to ensure the inspiring and ongoing use of wool.” Woolmark’s strong focus on emerging talent goes back to 1954 when a 21-year-old Karl Lagerfeld and an 18-year-old Yves Saint Laurent both won the then-named International Wool Secretariat award.

Let’s briefly meet this year’s selected candidates and glimpse something of their submissions before learning the winners.

In a stylish utopia imagined by Death By Tennis the homeless are taken care of in society in which the designer supplies convertible ‘utility ponchos’ and padded and quilted companion items to facilitate sleeping anywhere. ‘Welcome human,’ is the tenet of his philosophy.

DYNE designer, Christopher Bevans, was an avid child skateboarder and usually the only African-American on the slopes so he grew accustomed to standing out. He re-envisions his favorite wool bomber from his youth as one of the pieces in his submission. 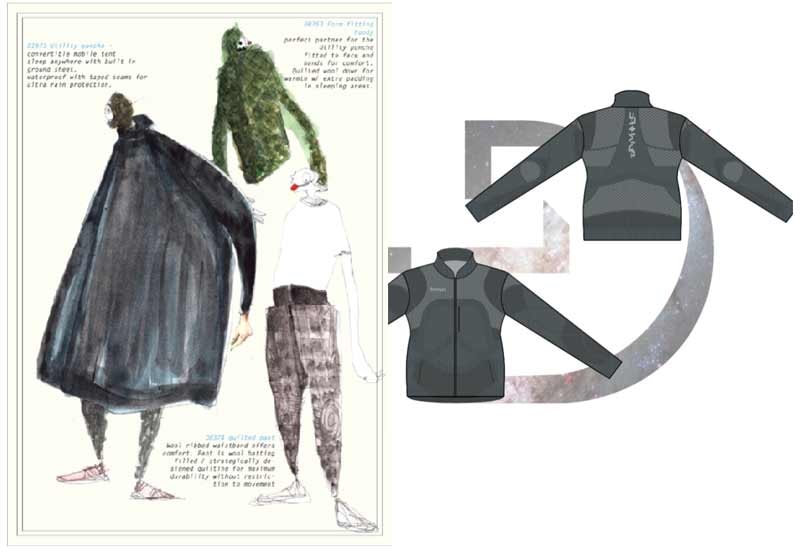 Kenneth Ning was inspired by the design process itself and his submission is a deconstructed suit whose jacket can be worn 2 ways: on the bias or on grain creating draping on one side. His graphic print is based on fit notes made during the prototype stages of the garment’s creation. 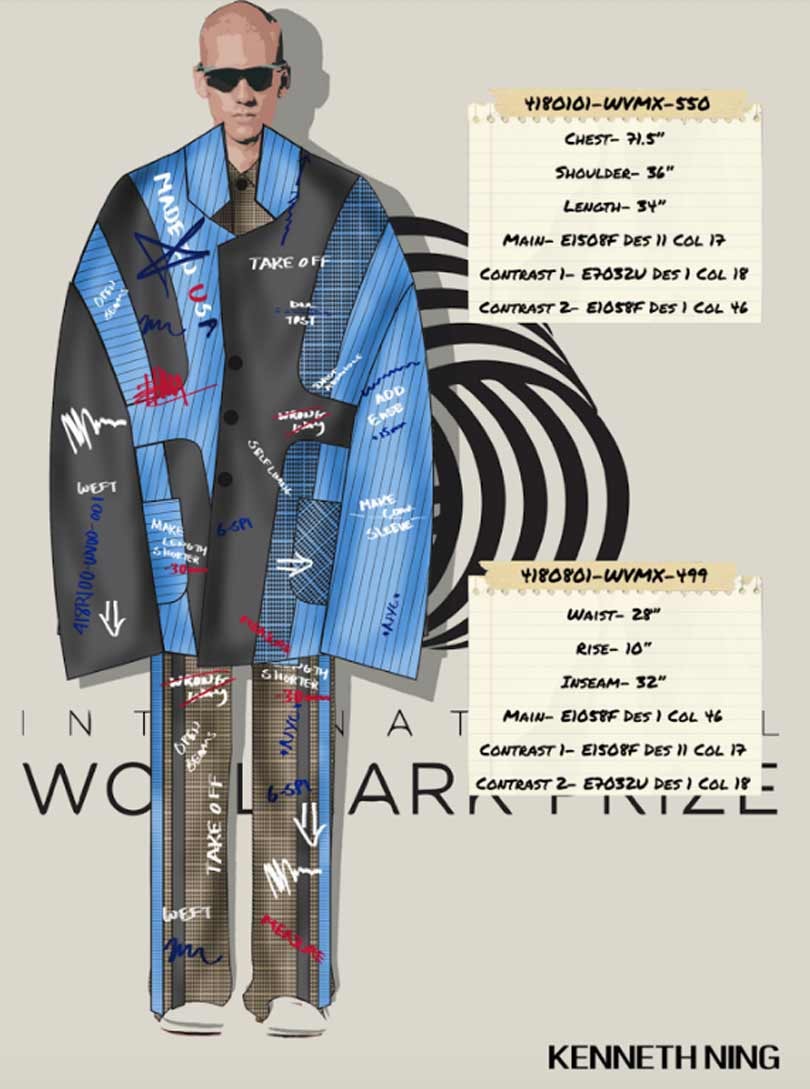 N-p-Elliot chose to focus on the history of merino wool as a tradable commodity that financed wars, outfitted Royals through to its role in the Industrial Revolution and arriving at present day and the Australian wool farmer.

Andrea Jiapei Li looked to pioneering minimalist Mies van der Rohe and the Less Is More aesthetic choosing to place her focus on function, incorporating different constructions, finishings and techniques on one single type of fabric. 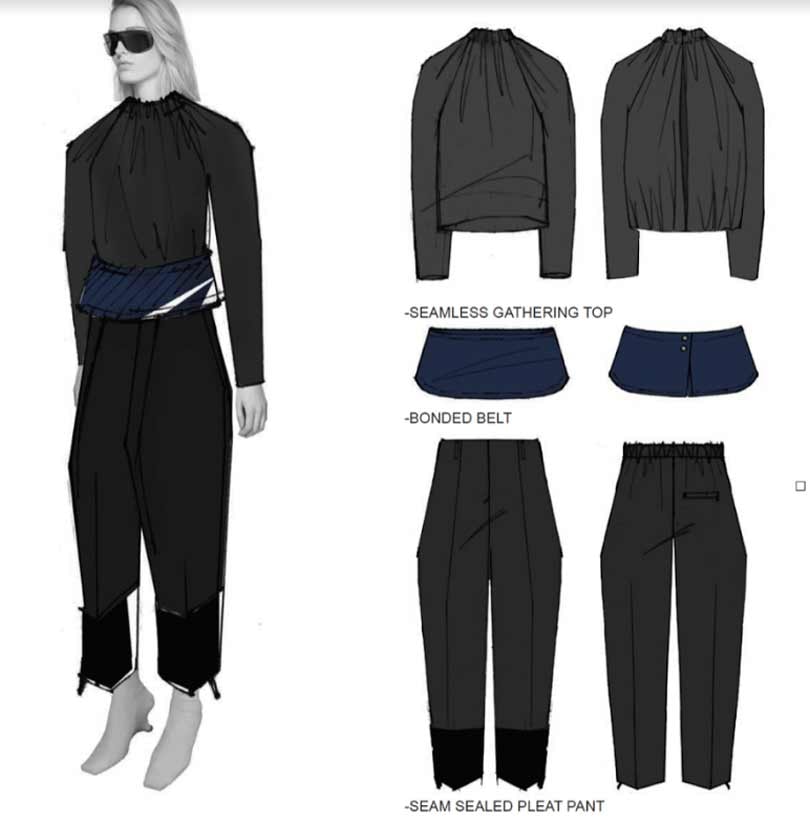 Claudia Li has an affinity for the overlooked and under-appreciated, celebrating the “humble” and “inexpensive” details of clothing: “Those details to me are exquisite and when well-made…are what makes it so special.” She cites denim overalls, fishermen’s sweaters and farmers’ aprons as starting points. 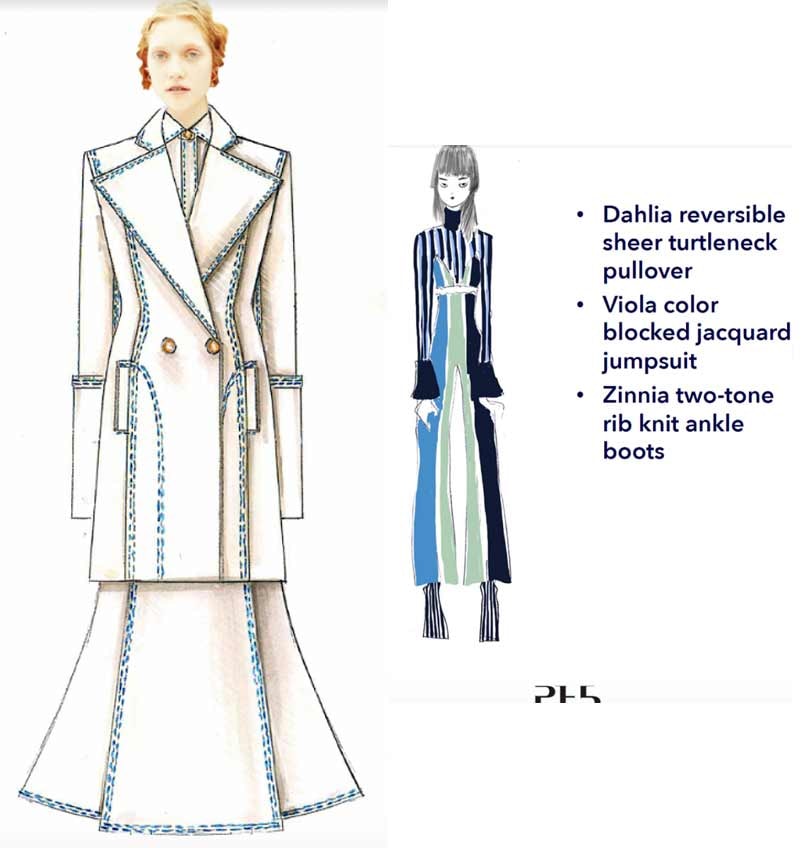 PH5 were inspired by the hyper-real series of paintings by Marc Quinn in which he places pieces of fruit amongst flowers, creating unlikely still life arrangements not to be found in nature. This “corrupt beauty” fuels an image of a jet setting woman with no time to pack a suitcase who layers for her needs, and even led to the creation of a special yarn for the IWP submission, called SheerWool.

Protagonist cites aviation pioneer, Jacqueline Cochran, founder of the Women’s Auxiliary Army Corp as inspiration and her quote, “I might have been born in a hovel but I am determined to travel with the wind and the stars.” Combining military influences, mid-century couture references and a strong feminine silhouette, their submission is a new take on the ‘power suit.’

Zaid Affas chooses to juxtapose manmade and natural beauty with architectural structure into what the designer hopes will strike the perfect balance of timelessness and understated luxury. 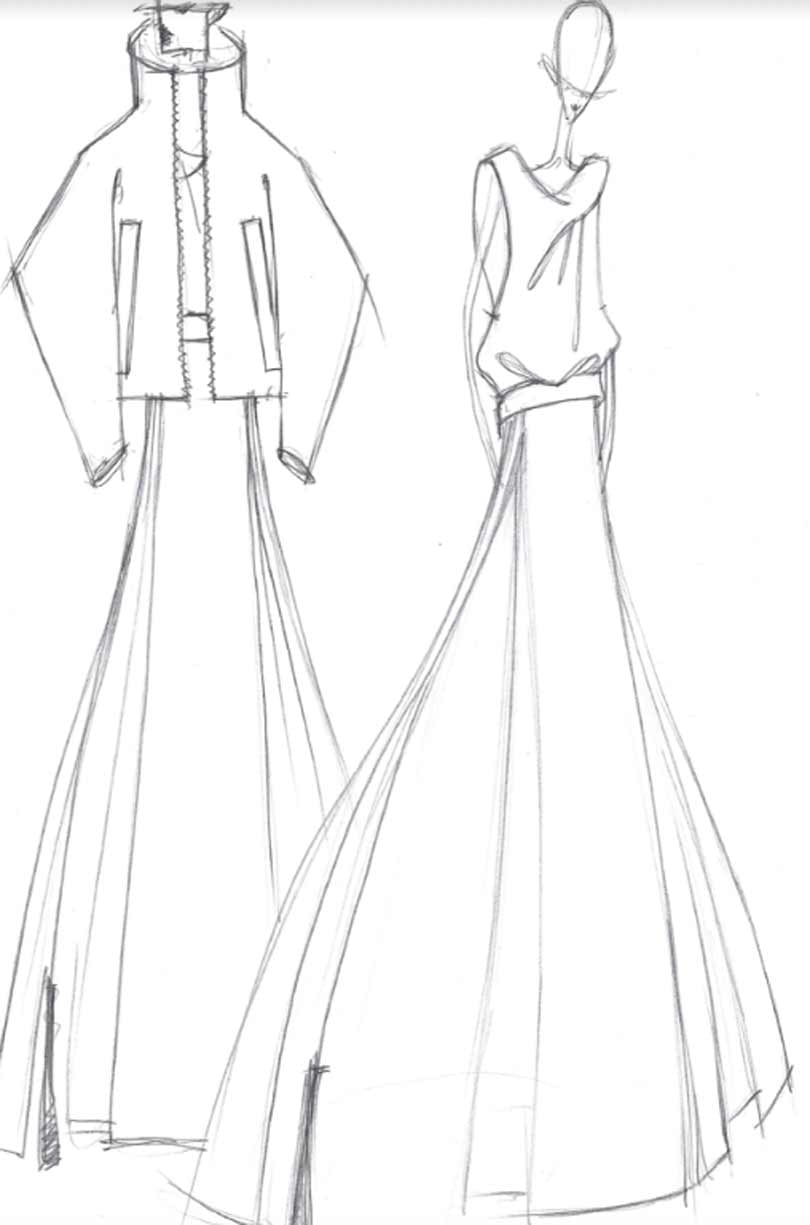 And the U.S.A. finalists for the 2017/18 International Woolmark Prize are: Dyne for Menswear and Zaid Affas for Womenswear.

The designers receive an initial prize of 70,000 Australian dollars, plus the opportunity to compete in the prestigious international finals, followed by a further 200,000 dollars to assist with fabric sourcing and marketing of their collection. For the next six-to-seven months, the winning designers will develop a six-piece capsule collection in Merino wool, to be showcased at International Woolmark Prize finals, alongside the other regional winners from around the globe. 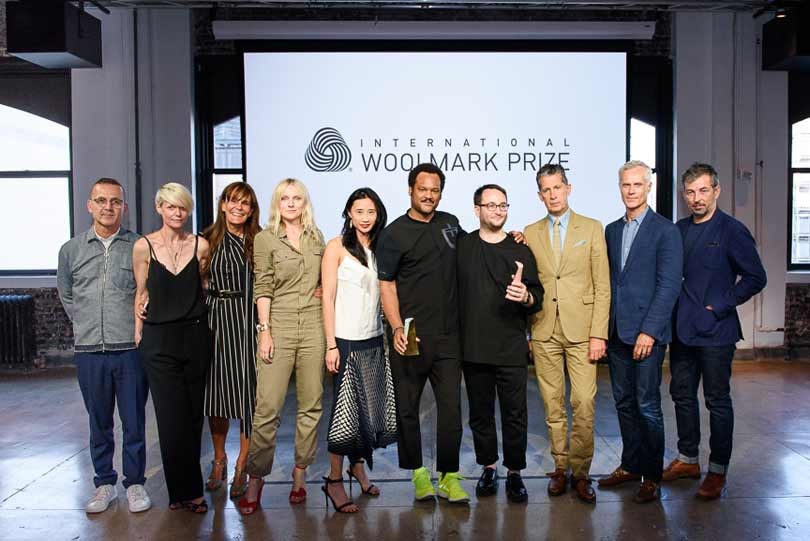 Another of this evening’s judges and C.E.O. of the C.F.D.A. Steven Kolb says, "American fashion is well represented with this year's winners of the Woolmark Prize. I'm extra excited to see both brands coming from the West Coast. The support and opportunity The Woolmark Company provides young talent is significant and is providing real business advancement for the designers."