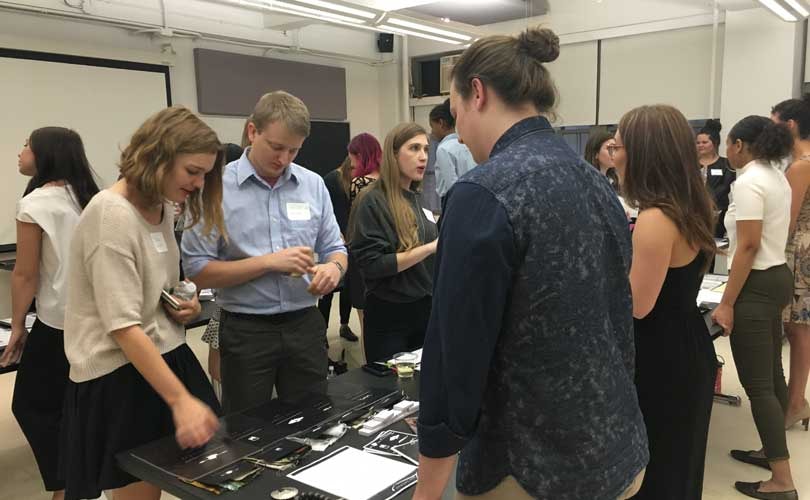 A selection of this year’s graduates from Kent State, Ohio, traveled this week to Manhattan for their annual two-day Portfolio Showcase event. Invited guests from the industry interviewed and took business cards from menswear, womenswear and merchandising students who, with school now firmly behind them, are eagerly eyeing their next step.

“I graduated Saturday and moved to the city on Sunday,” said Cindy Arroyo who has interned for companies as diverse as J Mendel and American Blues Denim. Although her ideal employer would be Celine, she has been on a second interview for JC Penney and completed a project of designs for them at their request. While she waits to hear, she continues to consider all options. “I’m here!” she announces. 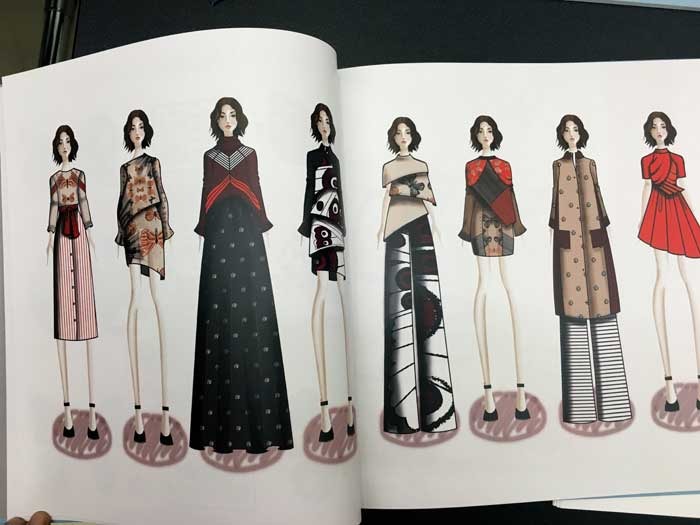 Lauren Pfieffer, a merchandising graduate who has been a fashion blogger for 6 years, credits her online profile with landing her a feature in Seventeen magazine followed by a Cosmopolitan internship. “My blog became a side career as I studied and while I have made some money and got sponsorships, it’s not why I do it. Usually the big magazines tend to hire NYC-based students, but I feel they were interested in me because I know how to connect with people online anywhere in the world in an industry which can be cold, impersonal and exclusive.” Her portfolio of What I’m wearing style photos is perfect Insta-outfit inspiration for Millennials, and she’s ready for her next challenge: “I’m moving to the city June 1st!” 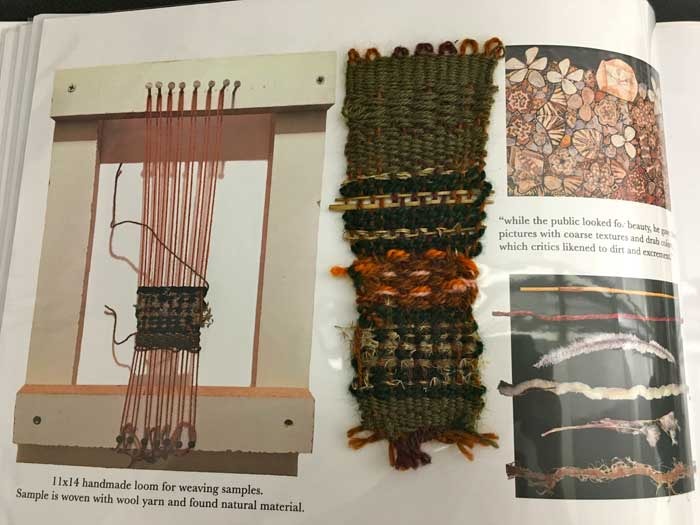 Sustainability is a driving force behind many graduates work nowadays but it seems the new blood and the old guard are not on the same page, as womenswear designer, Kellie Matthews, reveals: “At interviews, if I mention sustainability, they just shut you right down. Their faces change. Seems like it’s a huge far-off dream still for some companies, particularly the bigger ones. I tend to backtrack, but it’s a shame as even if you’re taking small steps, like saving paper, it’s still a start.”

Kellie had previously interned at Tara St-James where sustainability was an everyday part of the design process. She is currently preparing to take up a job offer from Macy’s after successfully completely their paid internship program last summer and she hopes to be placed on the team of one of their Millennial brands. Looking further ahead, she says, “Edun, Reformation, Urban, all address sustainability and are examples of where I’d like to end up.” At the moment, she’s concentrating simply on reacquainting herself with New York living. “It’s so loud compared to Kent. You automatically walk faster here.” 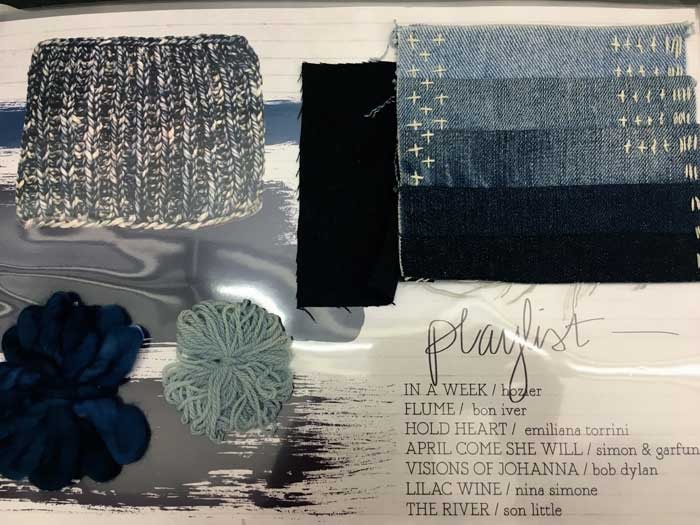 Abby Seger also applies ethical thinking to her work and made upcycling denim a feature of her final collection. “I used low-impact dyes, scraps from a mill in my home state of Minnesota; removed pockets, separated seams, distressed everything and then reassembled it in new ways. So if you’re not a thrifting customer, it’s still a new dress you’re getting.” 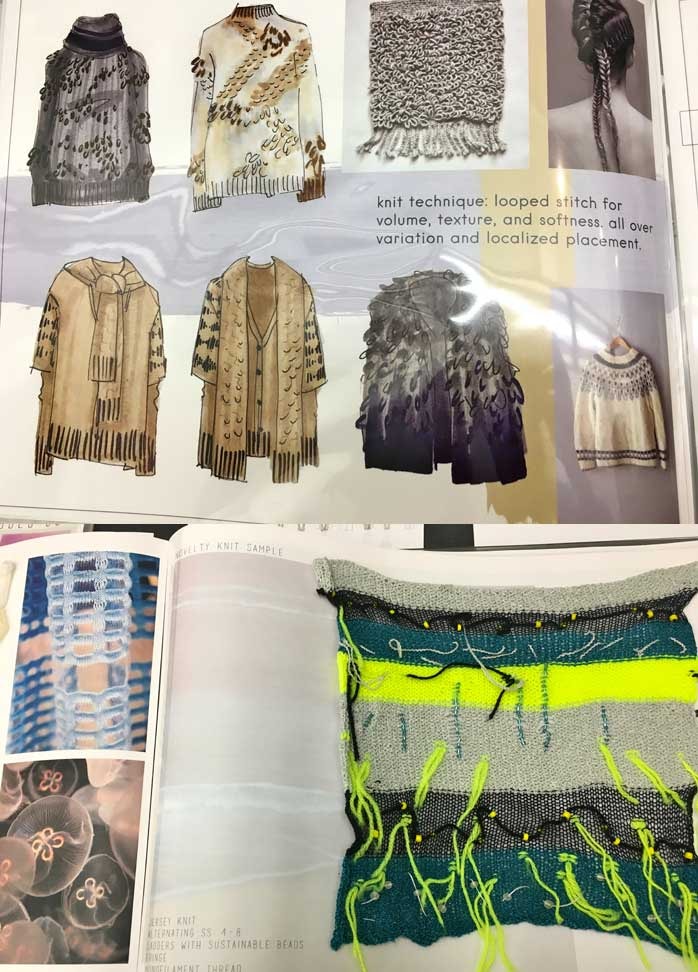 Repurposing perennial favorites for a new audience comes through even in Abby’s inspiration: Bob Dylan. “He’s a favorite of my father and grandfather; I grew up with him, but what attracts me is how he told stories through his song-writing.” The perfect party host, Abby provides both ambiance and look, creating a playlist for each collection in which Dylan sits alongside Bon Iver and Sia. Abby has recently accepted a position with Rebecca Minkoff. 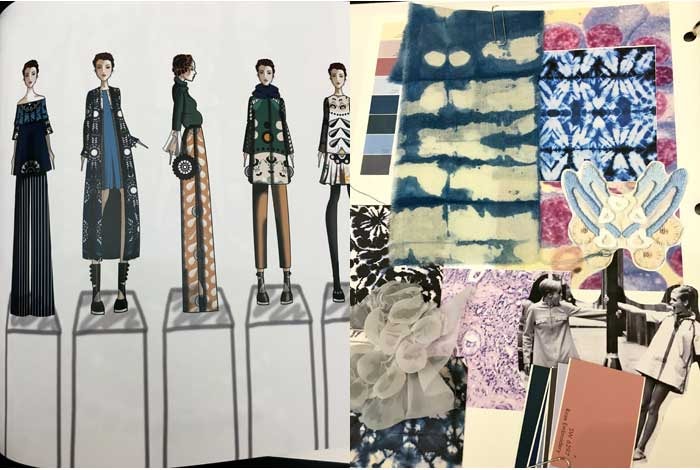 Kelsi McCafferty, ex-intern at Cynthia Rowley, developed her interest in print while studying for a semester at the university’s NYC Studio, and created all her final collection’s prints on Spoonflower. Although she says she would accept employment in Pittsburg or Columbus, she would love to work in NYC for a while. “Cleveland’s just not the same, is it?”

The women of the Masai tribe and their struggle for identity in the traditional community and the modern world inspired the final collection of Dior Delophont whose book exhibits equally her interest in menswear and womenswear. She identifies small menswear brand Ovadia and Sons as well as Rodarte as her ideal companies. Although having just retuned from showing in Beijing Fashion week, she says she would also love to work in Asia one day. 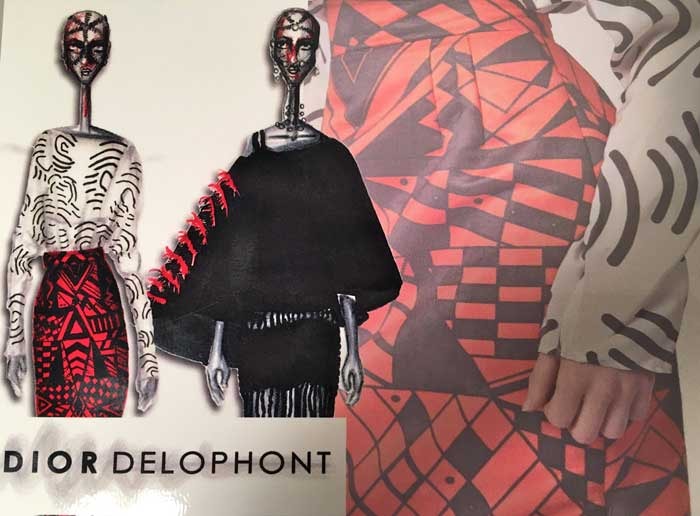 While knitwear was a standout in many of the portfolios, and print design abundant, accessories from all categories were also on display, despite the school not having an accessory design program. 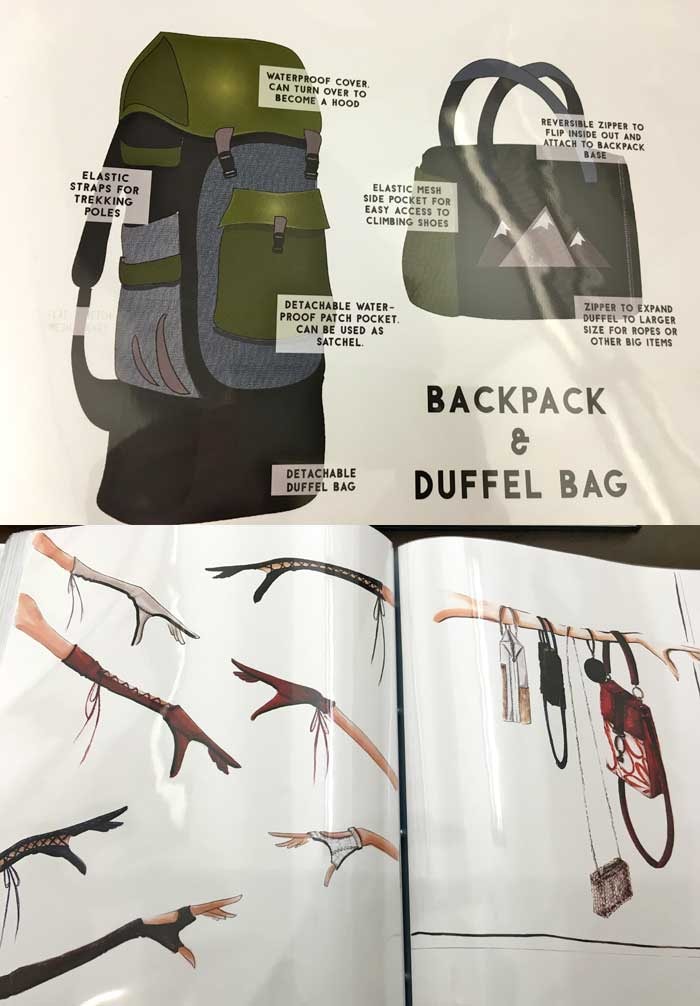 As the industry becomes more and more fast-paced, designers are constantly chasing inspiration. For Kara Kroeger, it didn’t always strike in time for her deadlines... “So my inspiration was my lack of inspiration.” I might look like I’m doing nothing but in my head I’m quite busy, reads one page in a collection entitled “Absent-Minded”. But her creative block doesn’t seem to have held her back: she has also just returned from Beijing; is a finalist in the Supima competition; and is a CFDA finalist for Kenneth Cole for which she had to design a range of shoes. So far she has had three interviews. “I don’t know what will happen next. They call and ask ‘Can you be in New York on this day? We have another step.’ That’s all the information I’m given. I don’t know when I’ll find out the result. I might have to move apartments so at least my roommates don’t see me become psycho!” 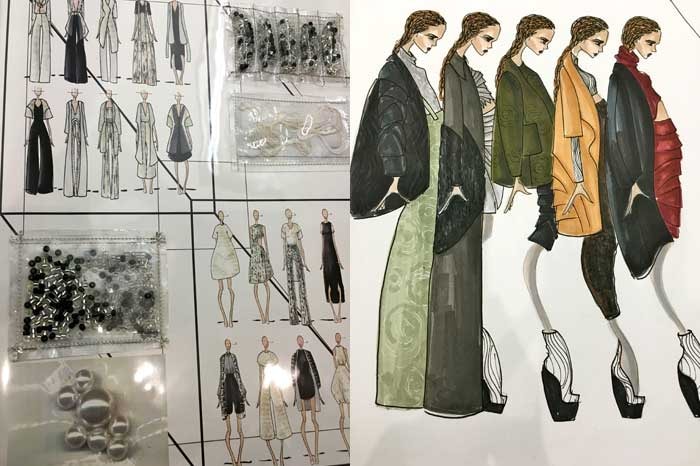 I ask Kara how she manages the workload. “I don’t have a social life. I’m in Kent, Ohio. There’s not a lot else to do which is okay as this is what I really want. I wouldn’t go out anyway.” In her junior year, she interned for Phillip Lim and says, “All the other students were international––from London, Norway, Peru––but I was the only one who knew how to do flats on Illustrator so I became the Flats Girl and got really fast. All the others only seemed to do flats by hand and, you know, Kent is so technical. So I did flats.” 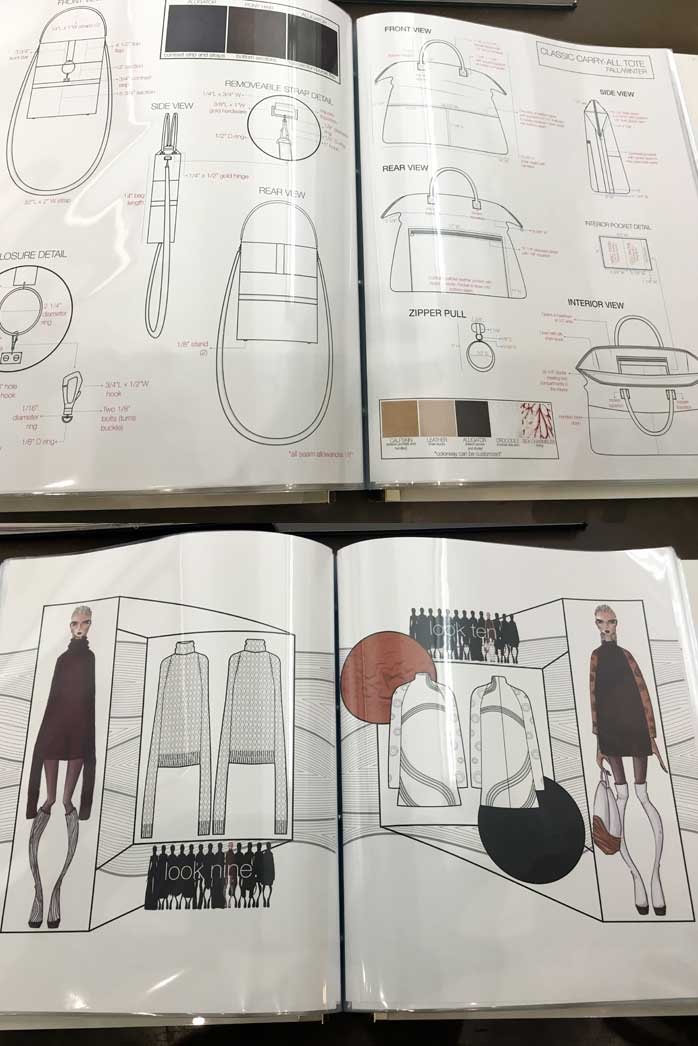 Kara’s portfolio also features knitwear, print and glove design, and a range of bags that she added to her Kenneth Cole submission–– “the hardest flats I’ve ever done”––closing with a collaboration with an architecture student to create 3D printed shoes. She will show her Supima collection, which she will be making during the summer, at New York Fashion Week in September when the judges will choose their winner. 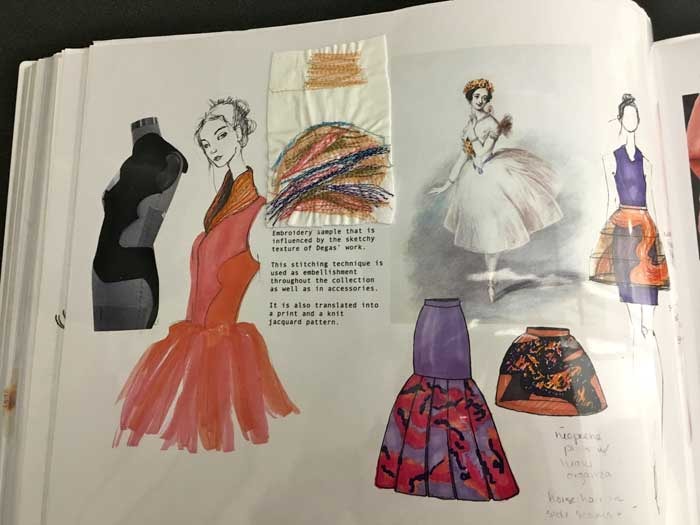 When I quietly slipped out, the rooms were packed to capacity, and bouncing off the ceiling were the sounds of multiple conversations in which students were enthusiastically selling their accomplishments over the last four years while Design Directors and HR representatives from throughout the city probed them on their process and their aspirations. It seemed to me that the industry gatekeepers were impressed with the work, but no doubt they were also listening intently to hear those key words that resonated particularly with their brand. It’s a type of matchmaking that takes place. The ideal scenario for both sides is to find that perfect fit. 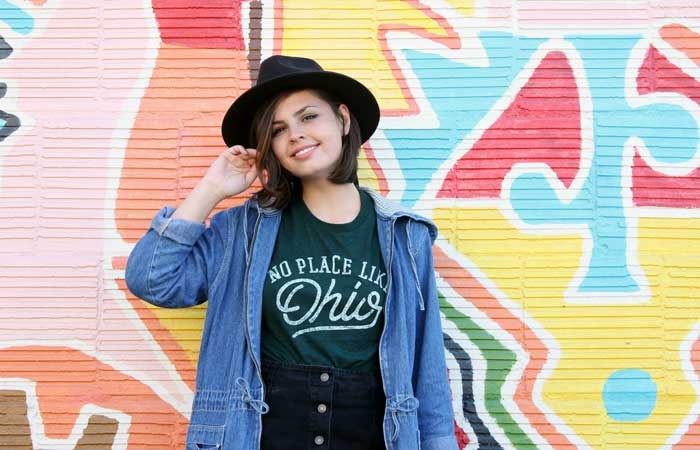