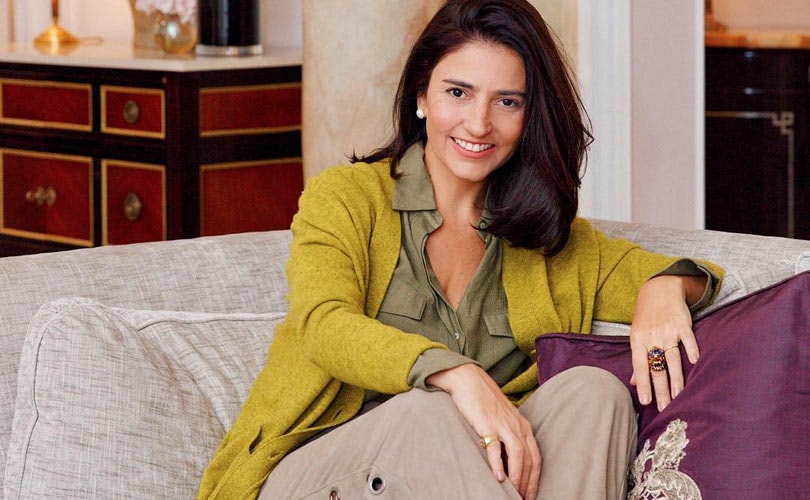 Pioneer Alice Ferraz on the past, present and future of influencer marketing

Alice Ferraz is one of Brazil’s 20 most powerful women, according to Forbes Magazine. She was also ranked by Business of Fashion among the world’s 500 most influential people in fashion. The reason for earning such accolades? She founded the world’s first network of fashion and lifestyle bloggers, F*Hits, back in 2010 when marketing professionals hadn’t even coined the term “digital influencer” yet.

F*Hits helps brands to develop campaigns with a team of 200 handpicked influencers who are provided with marketing, branding and legal mentoring. Combined, they reach an audience of over 40 million people in a country of 209 million, making F*Hits South America’s largest online audience for fashion, beauty and lifestyle.

It makes sense that the world’s first digital marketing agency focusing on influencers would appear in Brazil, considering Brazilians spend an average of 9 hours and 14 minutes online every day, of which 3 hours and 39 minutes are spent on social media, according to GlobalWebIndex. With 62 percent of the population active on at least one social network, Brazilians are the third most prominent nationality on Facebook and the second on Instagram. 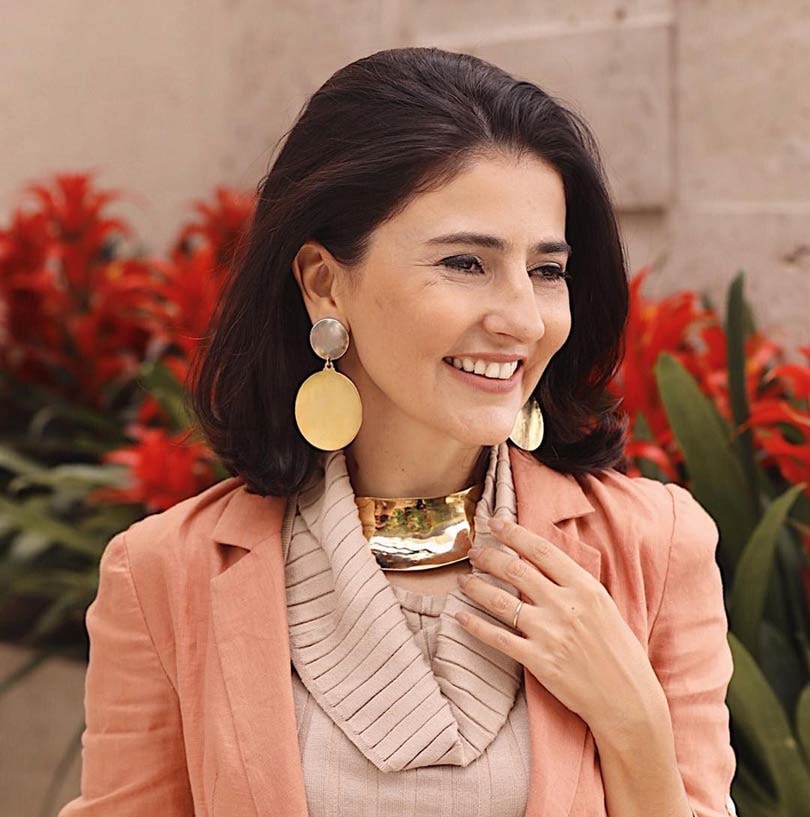 Now, Ferraz's academic work is about to cross the Atlantic. She has been invited by Italian fashion institute Polimoda to mentor its Master’s in Fashion Marketing and Communications. “Partnerships of this kind add an unparalleled value for our students, who are given the unique opportunity to learn directly from the protagonists of today’s fashion system”, said Polimoda’s Director Danilo Venturi in a statement. “Alice Ferraz [...] will serve as a key figure in guiding our students towards becoming top-level professionals for the future of communications”. The 9-month program is set to begin in June.

FashionUnited spoke with Ferraz over the phone about the past, present and future of influencer marketing and what her role at Polimoda will entail. 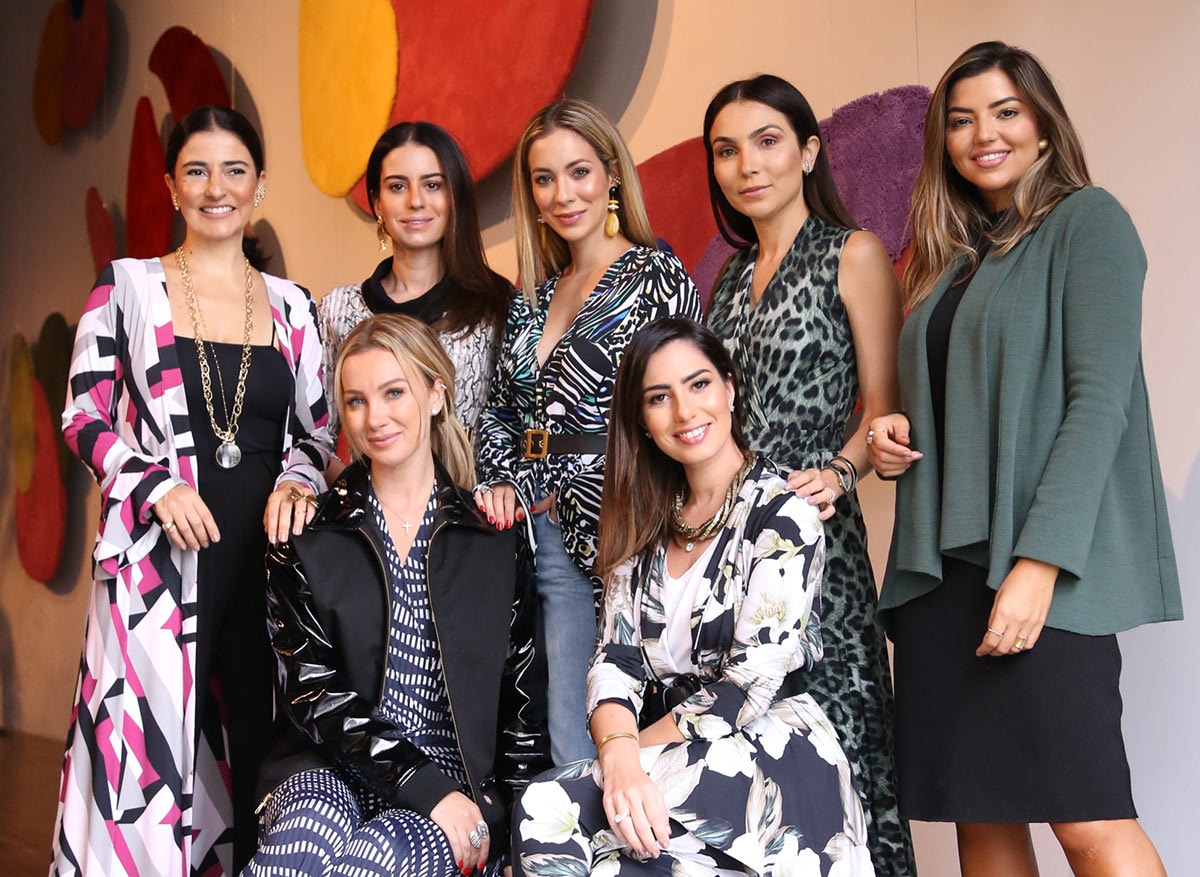 How did you realize that influencer marketing would become a thing?

I’ve been working in fashion for 25 years. I already had a communication agency with over 130 clients for whom we made campaigns, catalogs, advertising, catwalk shows… We did PR in a traditional sense, for the analog world. But, around ten years ago, I found myself restless and unsatisfied. I felt a sort of nonconformity which has always been with me in a way or another over the years. I’m always looking ahead, thinking about my next step, looking for ways to improve. So, ten years ago I noticed that our results weren’t so good anymore, we were growing at a slower pace and, when I set out to find out why, I ended up discovering that it wasn’t about something we were doing -- rather, the entire market was at fault. ‘Analog’ PR would no longer bring us the results we expected.

When I first read a fashion blog, I had this light-bulb moment: “maybe the way we’re communicating with people is wrong”. I found bloggers’ way of writing a lot more interesting, as a reader. Journalists are usually technical and distant, they tend to refrain from putting their personality in the articles. Bloggers, on the other hand, make things personal, which to me is more fun to read. That’s when I thought: “here’s our new language!” and decided to invite rising bloggers for a campaign with Brazilian shoe brand Corello. It was the world’s first campaign involving fashion bloggers, and an astounding success. Since then, I think the blogging format has influenced journalism as well, we’re seeing a lot more opinionated articles these days.

When checking the results of Corello’s campaign’s -- mind you that, back then, we didn’t have many of the measuring tools available to us today -- I realized that type of work wasn’t just a project or a new department within my existing company. It should be a separate business. 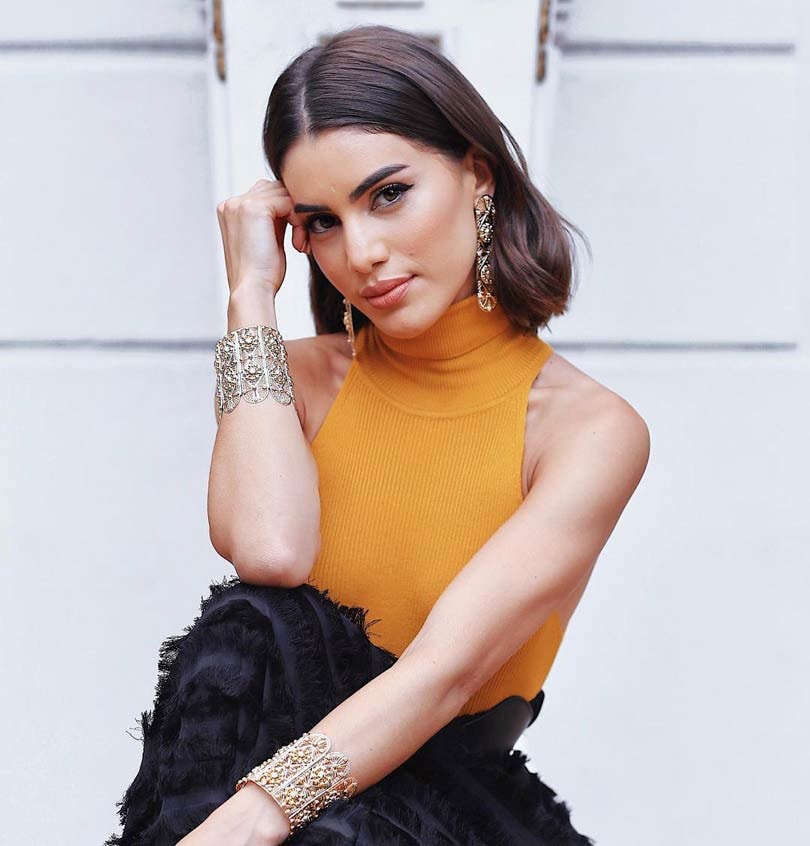 Camila Coelho, one of the influencers F*hits works with. She has 7.8 million followers on Instagram and over 3 million on YouTube

So much has changed since you created F*Hits. When you started the company, blogs were all the rage. Now, tools like Instagram and YouTube are far more popular.

Yes, many tools have risen in popularity since 2010. Regardless of the platform, I always ask myself the following questions: ‘how is this person’s reputation? How does this person address his or her audience? What is his or her story?’. When I started working with PR, corporate communication was “brand to consumer”: brands would buy ads on TV, newspapers and magazines, and consumers didn’t have an outlet of their own to respond. There was only a handful of media outlets: 15 TV channels, 10 magazines… That’s not a lot at all. Then, communication became “peer to peer”: millions of content creators share the digital space and brands are in the middle of this conversation. Today, we’re moving towards “many to many”, a marketing culture in which all consumers have many tools to communicate, which requires brands to look for a specific niche. The era of brands talking about themselves, that’s over. In this day and age, when brands create an ad to talk about themselves or their products, that’s just 10 percent of what they have to do.

In this “many to many” world, where we’re all constantly bombarded with information, how can brands make sure their message reaches the target niche? Isn’t the influencer market saturated?

I believe things are just getting started, actually. Most brands are still used to analog marketing. Some people say it was easier to be a marketer in the past, but I personally think it’s a lot more exciting to work nowadays. Yes, marketing demanded less strategizing in the past, it was more obvious. Today, strategy is 50 percent of a campaign’s success. You can hire the biggest influencer ever, that’s nothing without a good strategy. Unfortunately, people still work on autopilot: brands look at a girl’s feed and say “oh, she’s pretty, her style fits our brand, let’s do something with her”. But they don’t know anything about that girl’s audience, they didn’t check her metrics. My personal profile, for example, is very popular among people living in the city of Belo Horizonte, Brazil. I have no idea why, considering I wasn’t born there and rarely go there. But that’s what the data tells me. If you just look at my feed, you’ll never guess I’m someone to turn to if you want to reach people living in Belo Horizonte. Many people still rely a lot on intuition, but we’re not in the age of intuition anymore, we’re in the age of data.

What other rookie mistakes do brands usually make when dipping their toes in influencer marketing?

Apart from the lack of strategy, many brands haven’t yet professionalized their relationship with influencers. They don’t see the blogger as a professional. But they are, it’s work. A great deal of F*Hits’ success is due to us professionalizing this area. Why do so many brands think they can do without an expert to go about doing influencer marketing, when they do turn to experts for so many other things? When you hire an agency like F*Hits, we help you find the best approach, the shortest and safest route to the results you’re looking to achieve. 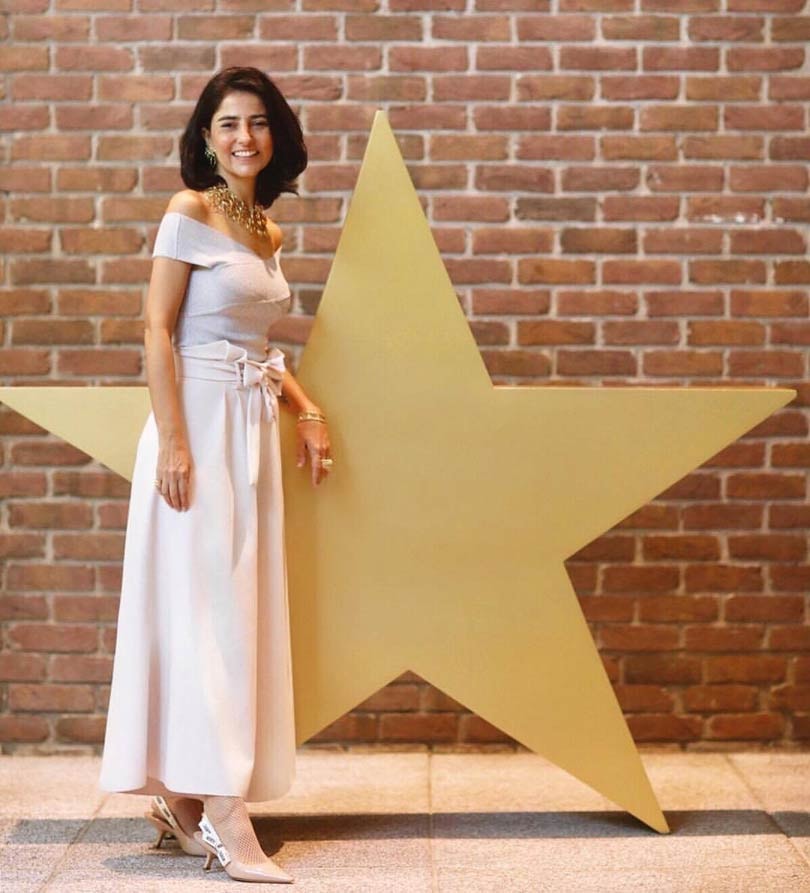 Was it hard to convince brands to work with influencers at first?

Extremely hard. It was probably one of the most difficult things I’ve ever done. I suffered prejudice because people saw it as frivolous and superficial, and I already had a consolidated company in PR. But, little by little, case by case, we built a track record -- and that’s how the market finally understood what we were doing, they saw the results in terms of sales growth, brand image growth. Now we’ve reached a point where brands understand the importance [of influencer marketing] but they still have to understand that it’s not simple, they have to do it the right way. It’s too good a form of communication to waste with bad results.

You’re about to mentor Master’s students at Polimoda. How did the relationship between F*Hits and Polimoda start?

It was the most organic thing. Polimoda’s director, Danilo Venturi, called F*Hits and asked if he could have a meeting with me. That meeting actually took a year to happen! But he came to Brazil and it was amazing. He’s a man ahead of his time, I was very impressed. After the meeting, he invited me to give a master class at Polimoda and I ended up spending three full days there. Those were fantastic days, I was so impressed with the quality of the teachers, facilities and students. The questions and discussions following my lecture were so interesting to watch, I came back home very inspired.

The invitation to mentor the Master’s in Fashion Marketing and Communications came a short while after I was back in Brazil and I immediately said yes. I’ll have to go to Italy every month, which is very far away, but I’m excited. I really believe we can do something different here. 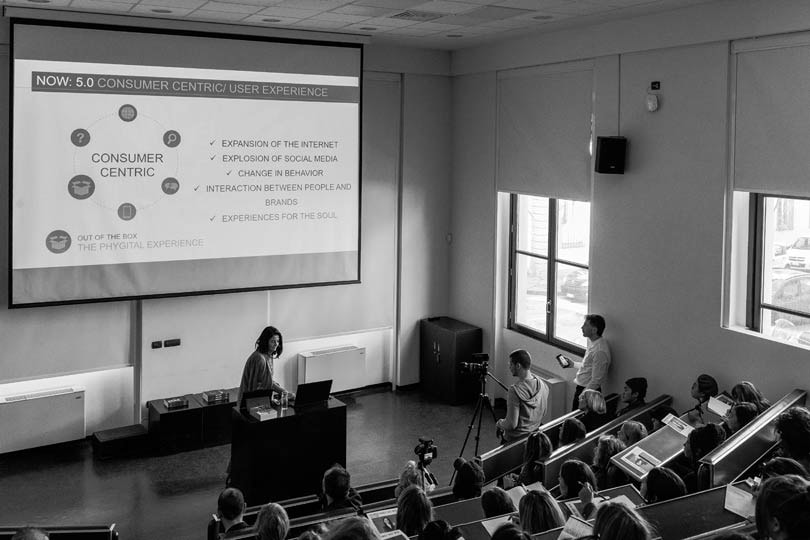 Alice Ferraz during her master class at Polimoda

What does your role as mentor entail?

I’ll first talk to teachers about social media, both from the brand’s standpoint and the influencer’s standpoint, as well as about the societal changes that have gotten us to the point where we are now. We’ll do a social media immersion with them, because Brazil is ahead of other countries when it comes to influencer marketing. I’ll also teach a monthly class, I’ll be with students once a month. That was a request from Polimoda but also a wish of mine as I want to be around the younger generations because that’s how I can understand the lives of people who were born in this digital world and for whom all of this is absolutely normal.

Is the collaboration between F*Hits and Polimoda a long-term one or will you only team up for the next programme starting in September?

The idea is to make it long term. I would really love to. I want to invest more and more in my educator side and use my platform to share high-quality, educational content as well.