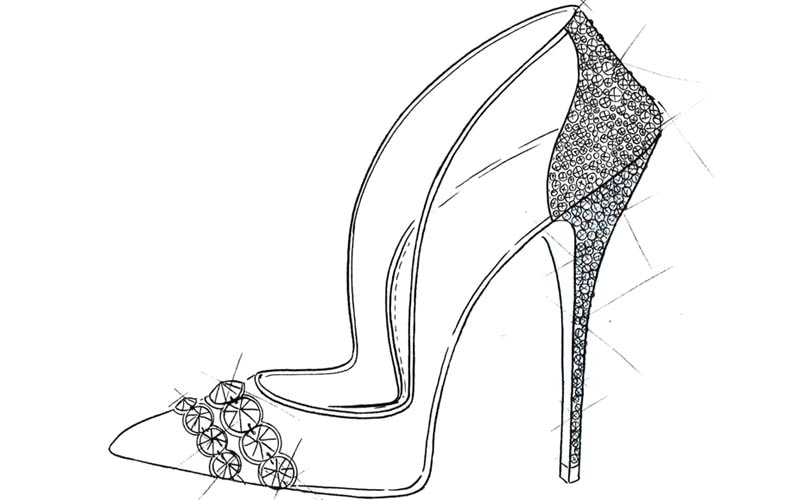 The tale of Cinderella is all too familiar. The beautiful girl with a wicked stepmother and two wicked step-sisters is greeted by her fairy godmother, who bestows to her a fabulous gown and a pair of gorgeous glass slippers so she can ride off in her carriage to meet prince charming at the ball. It’s a tale as old as time, but, many little girls imagined wanting to be a princess just like Cinderella when they grew up, and maybe even dreaming of owning their own glass slippers. For that little girl with dreams of dressing like a princess who has grown up into a fashionable woman your childhood dream will soon be a reality. Disney has announced on the morning of February 9th, 2015, that they will be collaborating with nine luxury designers who will create their own versions of Cinderella’s glass slippers.

The nine designers who will be making every woman’s childhood fantasy come true are Stuart Weitzman, Paul Andrew, Alexandre Birman, René Caviolla, Jimmy Choo, Salvatore Ferragamo, Nicholas Kirkwood, Charlotte Olympia, and Jerome C. Rousseau. All the crystals that will be used in the designers shoes will be provided by Swarovski, respectfully so. Who better to add shimmer to a shoe than the world’s best known crystal company. “Cinderella’s glass slipper has become a magical symbol of transformation,” Jonathan Symington, Disney’s Vice President and General Manager of licensing of Disney Entertainment at Disney Consumer Products, said in a press release. “Each pair of shoes in this exciting global collection captures Cinderella’s elegance and grace through the lens of celebrated designers, making this shoe collection truly fit for a princess.”

While this collection is sure to be one of the most coveted heel collections of the season, getting your hands on it won’t be easy. The fairytale inspired collection will only be available at select department stores and malls around the globe. A few of the designers select boutiques will also carry the fabulous heels. As for the stores who currently have plans to carry the collection, they include Saks Fifth Avenue in New York City and Beverly Hills, Harrods of London, Galeries Lafayette in Paris, Excelsior Milano in Milan, Tsum in Moscow, Isetan Shinjuku, and Level Shoe District at the Dubai Mall in the United Arab Emirates. It’s clear that Disney and the designers have high hopes for the collection selling out.

Saks seems to be the most in love with this collection of all the stores carrying it, because they have already planned to center their March window displays around Cinderella. The center six windows of Saks Fifth Avenue’s flagship store in New York as well as several windows of Saks’ Beverly Hills location will be decorated with fairytale vignettes in honor of Cinderella. The displays will include the entire Cinderella collection from all nine designers, respectfully so. Along with the window displays 10022-SHOE, Saks dedicated shoe floor zip code, will also displays the nine designer collaboration.

The release of the collection will come just shy of the theatrical release of the new live action Cinderella film starring Cate Blanchett, Lily James, Richard Madden, and Helena Bonham Carter directed by Sir Kenneth Branagh set for March 13th, 2015. While you are at the mall clamoring for your new Cinderella inspired heels you can then line-up for your tickets to what is sure to be an enchanting film afterwards. What better excuse to show off a stunning new pair of heels than a date to the movies?