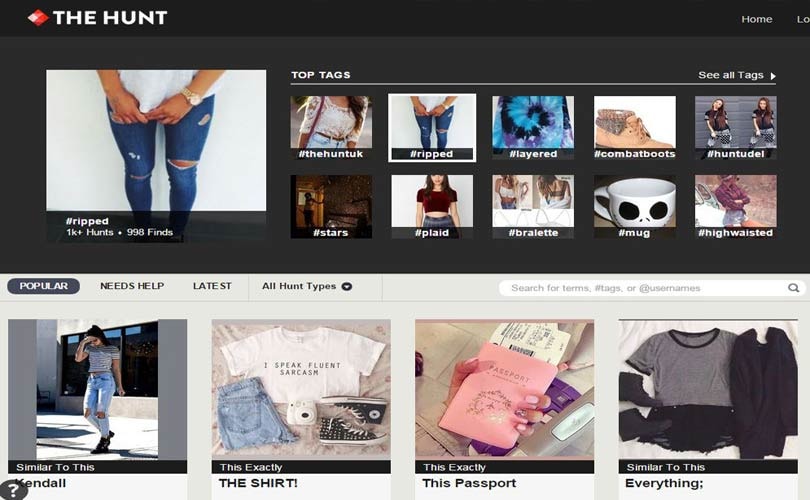 Fashion app The Hunt launches in the UK

The Hunt, a US-based social media fashion website and mobile app, has launched in the UK. The San Francisco-based tech platform, whose backers include actor Ashton Kutcher and model Tyra Banks, allows users to post a picture of an item they see on the street or on social media along with their size and budget, and the community will help them to track it down.

The site, developed by tech entrepreneurs Tim Weingarten and Simon Peck, rolled out in America last November, and has already accumulated three million registered users who have started over five million hunts, with most users enjoy following each other’s hunts, resulting in more than 50 million ‘follows’ of hunts since launch.

"Try typing 'little black dress' in Google and you get 331 million results. Try finding the perfect one - conservative or edgy or silky or flowing - and you'll see how time-consuming this task can be," said Tim Weingarten, CEO and co-founder of The Hunt. "The Hunt is the first solution to shoppers' deep-rooted frustration in trying to find exactly what they're looking for, faster. If you have a photo of a dress you really like but can't find, chances are our community of like-minded shoppers will have a suggestion for you, probably within a day. It’s like having a whole team of personal shoppers and stylists at your fingertips, wherever you are, on the go."

TheHunt.com launches in UK and names Rosie Fortescue as its brand ambassador

The app and website send users to third party e-commerce sites to complete the ‘hunt’, and has already recommended products from UK sites such as Topshop, River Island and Asos.com. According to the fashion site it has driven more than eight million visits to third party e-commerce sites since launch, and the conversion rate from ‘hunts’ to sales is between 1.5-1.75 percent, which they claims validates that users who use the community “intent to shop”.

To help launch the fashion platform in the UK, The Hunt has named reality TV star Rosie Fortescue as its brand ambassador. The free app is currently only available for iPhones but it is expected to extend to Android devices in the coming weeks.