Whatever else one might say about John Galliano, the sacked Dior designer who has returned as Maison Margiela's creative force knows how to put on a show.

Paris Fashion Week attendees were treated to Galliano's taste for over-the-top theatricality in a display that featured models smeared with make-up and crouching, hunchbacked, down the catwalk.

Maybe it was a headwind symbolising Galliano's own buffeting when he was booted from Dior four years ago for making drunken anti-Semitic remarks. Or maybe it was just the eccentric 54-year-old British designer's way of drawing attention to his 2015 autumn women's collection for Maison Margiela, which he joined late last year.

There was no explanation forthcoming -- the formerly outgoing Galliano didn't even do the usual appearance on the catwalk at the end of the show late Friday.

But the sight of models wearing dishwashing gloves and colourful lipstick worthy of clowns, and making furtive progress under squashed down hats left a mark on the fashion press.

Suzy Menkes, a prominent editor for Vogue, said Galliano's collection may not have anything to do with Margiela's clothes before he took the helm. "But normcore be damned! The fashion world still needs a designer to prove that dressing up is not so hard to do."

The collection featured items ranging from distressed street-punk numbers, midriff-baring tops over tartan pants, to elegant black dresses and skirts worn by blondes with racoon-mascara eyes. There were retro lines, printed flowers on velvet and feathers. The garments "question ideas of conformity," the label said in a statement. The image was one of a "reactionary and sensitive" muse for whom "tailoring and flou find new proportions".

Galliano lost his job as Dior's star designer in 2011 when he was filmed in a Paris bar making slurred insults against Jews. He underwent a detox treatment and disappeared from view for years before making his haute couture comeback in London last year for Margiela. 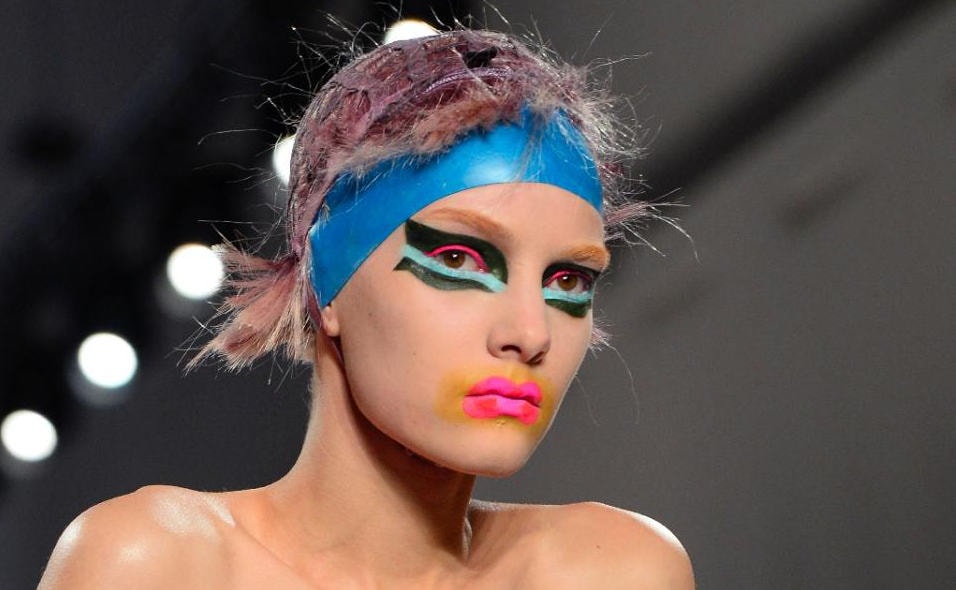 That collection was hailed by many fashion experts, and many of his prominent supporters -- former supermodel Kate Moss among them -- have applauded his return.

At the Balenciaga show, Lady Gaga was the star invitee, showing her front-row support for fellow American Alexander Wang who took over the house's creative direction in 2012.

The collection was more classic than Margiela's, with black and grey dominating numbers that wouldn't look out of place in New York's chic neighbourhoods, down to the leather gloves and handbags.

Feminine lines that especially brought attention to the waist were balanced on stiletto shoes so fine some of the models teetered precariously.

Dior's return to the future

Dior's catwalk parade showed off a collection clearly in continuation with Raf Simons's haute couture numbers: retro-catsuits, thigh-high vinyl boots and outfits recalling a sexy future as imagined by someone from the 1950s or 1960s.

"I wanted a collection that handles nature and femininity in a different way, far from the garden and flowers and more towards something freer, darker, more sexual," the Belgian designer said.