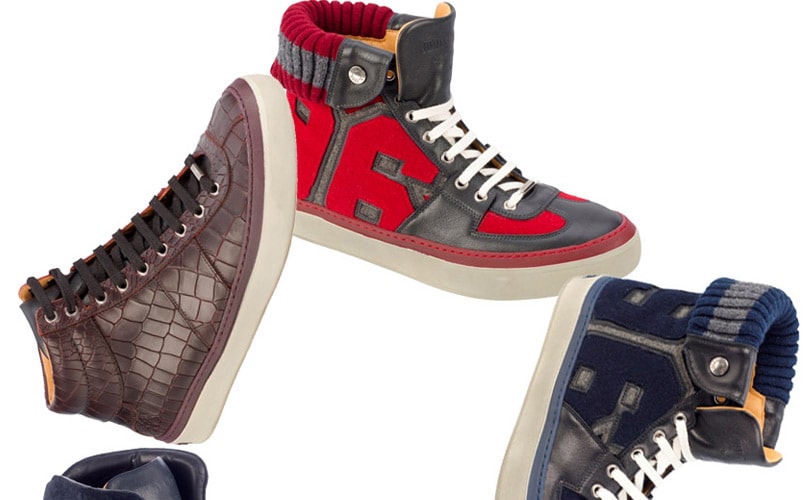 New York - Jimmy Choo was made a household name in America largely in part to the ladies of HBO's "Sex and the City." Who could forget the iconic Carrie Bradshaw strutting around the streets of New York City in her 500 dollar plus Jimmy Choo stilettos as one of the most stylish women to have ever graced our television screens. Back in those days, Jimmy Choo was known for their stilettos and pumps, with shoe offerings just for women.

Fast forward almost a decade after Sex and the City aired its final episode and Jimmy Choo's world has certainly expanded: to men's. In 2011, Jimmy Choo co-founder Tamara Mellon, a former accessories editor at British Vogue, launched a line of Jimmy Choo shoes just for men, and they were met with much critical acclaim. Since then, Jimmy Choo men's shoes have been a highly coveted item among the fashion elite and luxury footwear lovers, and if their recent presentation at the Seymour Leisure Centre is any indication, they aren't going anywhere anytime soon.

For their most recent collection Jimmy Choo fused the world's of athletic performance and high fashion. BMX bikers and skateboarders were putting their athletic talents on display in Jimmy Choo sneakers as a breakfast presentation took place in the balcony above. Jimmy Choo's evolution into the world of men's wear coincides with the growing power of men's fashion in the industry right now.

Jimmy Choo gets fun and sporty for latest collection

In 2011, Jimmy Choo launched into men's just as the men's wear market was beginning its quiet ascent. Men's bags were becoming a major item on the catwalk, and e-commcerce luxury channel Net-a-Porter was preparing to launch their brother site, Mr. Porter. Having already developed a household name for themselves as one of the most luxurious women's shoe companies in the world, launching into men's and finding success came quite naturally for Jimmy Choo.

What sets Jimmy Choo apart from many of their other competitors, like Salvatore Ferragamo, Gucci, and Prada, is the incredibly original approach to their designs. For their most recent collection, Creative Director Sandra Choi gave us crinkled leather, tassel slip-ons, stonewashed denim lace-ups, and boots with espadrille soles. Currently, men’s is the fastest growing category at Jimmy Choo.

Jimmy Choo CEO Pierre Denis told WWD that the brand has worked hard on its fabric and leather research with the goal of finding the sweet spot between casual and formal.Whatever they are doing it certainly is working. As the men's wear market continues their incredibly fabulous rise in the fashion industry, Jimmy Choo is poised to keep its slice of the luxury pie.