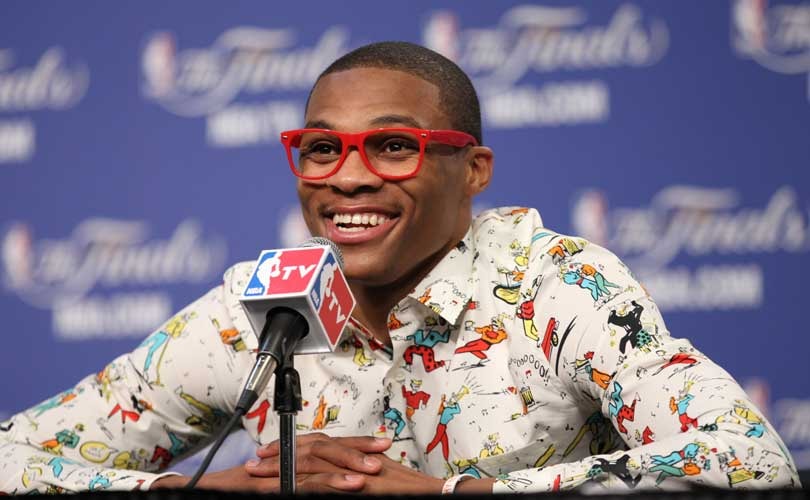 Russell Westbrook: from the courts to creative director

Fans of both basketball and fashion have something to celebrate. Oklahoma City Thunder Player, Russell Westbrook, has been tapped to be the campaign creative director of True Religion Jeans. While basketball players and pricey jeans usually don’t go hand in hand when you think about sports relationship to fashion, Westbrook is no stranger to the fashion world. Westbrook collaborated with Barney’s on a successful clothing and accessory line, which was just the gold star he needed on his resume to be considered for the Campaign Creative Director position at True Religion.

It’s no secret that Westbrook loves fashion either. The superstar basketball player has been photographed in printed shirts, hombre sweaters, and designer sunglasses, but it wasn’t enough for Westbrook to just wear fashion, he had to become fashion as well. In an era where athletes are only as good as their next endorsement or collaboration, Westbrook has worked to ensure his collaborations were fashion at its finest.

Westbrook’s new role entails him working on the spring ads for True Religion. Westbrook’s new duties couldn’t possibly come at a better time, as he will be playing the NBA All-star game at Barclays Center on February 15th during New York Fashion Week, which will allow him to make an appearance at the True Religion store conveniently located across the street, and begin to show his face as the newly minted Campaign Creative Director.

Westbrook’s new position as Campaign Creative Director signifies an important trend in the fashion industry right now as well: the fashion and sports community actually embracing each other. While the sports community has always done a big part in promoting the biggest trend in sneakers, lately the worlds of fashion and sports have also evolved to include designer apparel collaborations and accessories. Adidas recently launched a collection with Stella McCartney that was on every sports and fashion lovers must have list last year.

Stella McCartney was just one prominent name in the long list of designers that Adidas has collaborated with, which also includes Jeremy Scott, Raf Simons, and Rick Owens. Sports wear also happened to make more than its share of appearances and influences in collections at menswear shows in London, Paris, and Milan last month with sports wear being major themes in collections for Balmain, Band of Outsiders, and Phillip Plein. It’s fascinating how two worlds so far apart have manage to really come together.

The fashion industry has not forgotten where it’s original roots with sports wear lies, however. Just last month, Nike launched a collection with Berlin-based designer Johanna F. Schneider, aptly titled NikeLab x JFS. Adidas has also decided to continue its round of designer collaborations by launching a new collaboration with Junichi Abe’s label, Kolor. With the menswear market becoming such a hot commodity lately, it makes sense that fashion companies are seeking to combine sports, something men have loved forever, with fashion, something that more and more men seem to be falling in love with everyday.

It’s a changing landscape, and it isn’t just enough for a sports star to be sponsored by a Nike ad anymore. They now have to add fashion professional to their resume. Westbrook has been the NBA for six years, and his claim to fame aside from his basketball skills has been his fashion sense. There have admittedly been fans who have tuned into to ESPN when Westbrook was on just to see what he would be wearing.

Westbrook has the privilege of not only being the Campaign Creative Director for True Religion though, but also the face for some of the spring ads. While the ads have been criticized for being too mundane compared to Westbrook’s actual style, one do well to remember that True Religion tends to be more functional than flashy. As for Westbrook’s plans for the campaign, the public will just have to wait and see. It’s a new era, though, for fashion and sports collaborations, an era that the public is welcoming.