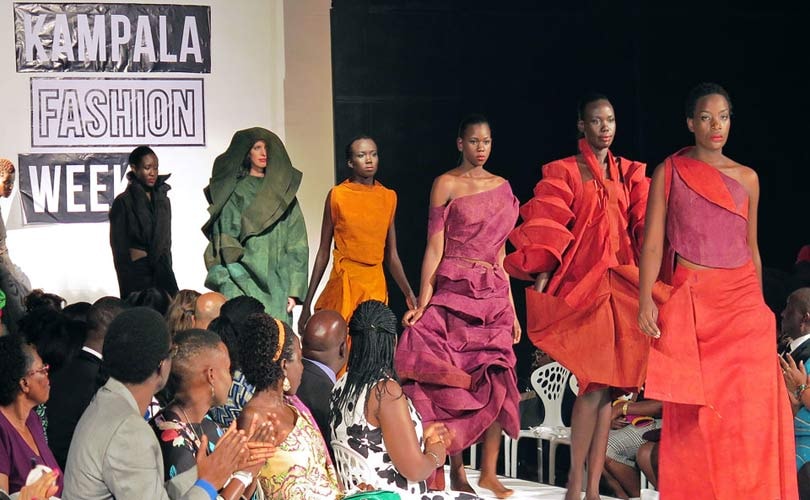 Mention African style and the fashion crowd thinks Lagos, or Johannesburg. But Uganda's emerging designers -- using a mix of local craft and global savvy -- are hoping to give them a run for their money.

Fashion in the east African nation may be viewed as frivolous by many, with the industry under resourced and local designers facing fierce competition from cheaper second hand clothes and Chinese imports.

But tickets for Kampala's first ever Fashion Week earlier this month sold out swiftly, with models strutting the catwalk showing everything from sequined hot pants to accessories made from cow horn, to a dress made from the country's unique bark cloth.

"In so many ways anything to do with being artistic is a struggle here, people don't take it seriously," said Ugandan-born designer Jose Hendo, now based in Britain, who showcased her work in Africa for the first time at the show.

It follows similar successful recent fashion weeks in Burundi and Rwanda, while Kenya's opens this week in Nairobi, as east Africa moves to boost its stake among the continent's designers. The show had international backing, with the same production crew -- LDJ Productions -- who provide technical support for New York fashion week helping out in Kampala.

The Kampala Fashion Week show featured 10 Ugandan women and menswear designers, many self-taught, and marked a comeback for Natasha Karugire, the daughter of President Yoweri Museveni. "My prayer and hope is that Ugandans will all wear our own clothes and that the second hand clothes market will fizzle out of our society," said Karugire, whose label J&kainembabazi sent out bright, floral dresses with traditional beading at the collar.

Hendo's collection for the show featured jackets, trousers, coats, headpieces and other accessories made out of the bark cloth from local trees, mixed with cotton, silk and denim. The award-winning ethical designer came up with the idea of using bark cloth after a 2001 trip to Uganda with her family.

"I spoke to my mother and realised there's so much to it, it is not just about making tourist souvenirs," said Hendo, who has developed far more complex designs than the ubiquitous bark cloth hats and place mats usually on sale. "What is exciting is that it is organic, the process of making it has never changed in 600 years."

In Uganda's royal kingdom Buganda, bark cloth is worn for coronations and other important cultural ceremonies. Making it is an ancient craft, listed on UNESCO "Intangible Cultural Heritage of Humanity." Hendo is now selling her creations in Uganda and Britain, where she has three shops.

Kampala's show ended with Ugandan model Stacie Aamito strutting the runway in Hendo's breathtaking "fairy dress", featuring a bodice made from bark. Aamito, 21, had a "humble" upbringing in northern Uganda, before winning the African franchise of the "Next Top Model" reality TV show earlier this year.

She is now signed to an elite agency in New York, where she lives. But she said her family had been doubtful of her career choice at first, telling her that "'you need to be a lawyer, you need to study and be something, because if you're a model you're not anything'," she told AFP. "Most people do not take fashion seriously" in Uganda, she said, but insisted the trade could "definitely be a big earner" for the nation.

Kampala Fashion Week founder Gloria Wavammuno, 29, said her tailor aunts, who lived during the era of dictator Idi Amin -- a time of "very long skirts and no trousers" -- were supporting their families through the local trade. "One of my aunts is sending her children to very good schools, two of them have gone to college in America and Canada," she said.

Some designers travel to China to source their fabrics but Wavammuno wants to support the local sector. Wavammuno, who interned for British men's designer Ozwald Boateng and has participated in fashion weeks in New York and Paris, showed off her jackets, raincoats and "woolly things" made from "furniture materials for sofas and curtains."

They were teamed with sandals, handbags and collars created from Uganda's famous giant Ankole cow horn and fish, sheep and cow leather. Designers are hopeful, even though Wavammuno admits Uganda's fashion industry is starved of resources. "Our fashion school doesn't even have a seamstress,' she said. "It doesn't even have machines." (Amy Fallon. AFP)