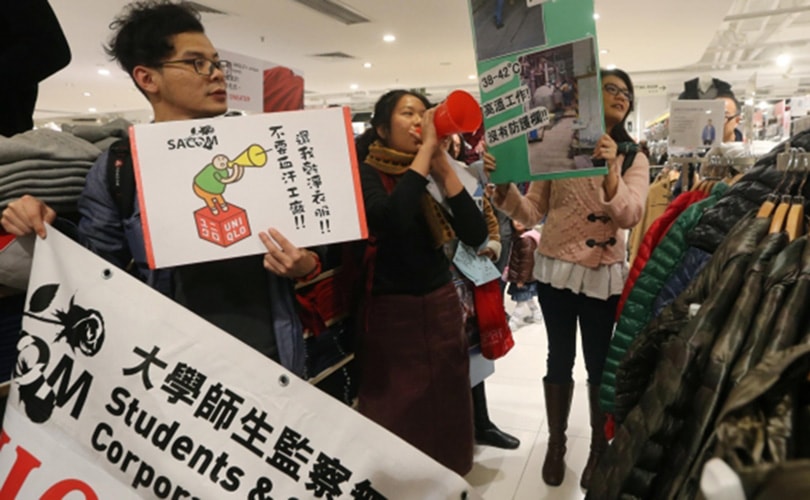 The organization previously investigated working conditions at two of the retailer's suppliers: Pacific Textile Ltd and Donguang Tomwell Garment Co. located in China's Guangdong province, between the months of July and August of 2014. According to SACOM report, the organization carried out undercover investigations and conducted over thirty interview with the factories workers.

The SACOM report's conclusion: employees work excessive long hours for low basic wages. In addition they must work in an unsafe and risky working environment and work under a harsh management style and punishment system which is unrepresentative of its workers needs.

Fast Retailing, parent company of Uniqlo, was swift in its response to SACOM report, which was published online earlier this week and undertook its own investigation of the factories named. "We confirm that, regrettably, the inspection found several problems including long working hours," read the company's statement.

"On the other hand, while the inspection did not reveal some of the problems stated in the SACOM report, Fast Retailing and SACOM have different views on some of the issues described in the report." Since releasing it's initial reaction to SACOM, Uniqlo has taken action against the two factories.

The fast-fashion retailer has requested that Dongguan Tomwell Garment Co. and Pacific Textile make certain improvements regulating working hours and their factories and set up a workers' union, which is to hold elections and plan its first assembly in March.

"Respecting human rights and ensuring appropriate working conditions for the workers of our production partners are top priorities for Fast Retailing, and in this we are completely aligned with SACOM," said Yukihiro Nitta, Fast Retailing Group Executive Officer responsible for CSR.

"Fast Retailing has urged swift action against the factories on the issues identified in the SACOM report, and we will cooperate fully with them to ensure that improvements are made. Together with third parties, including auditors and NGOs, we will check progress within one month," he added.