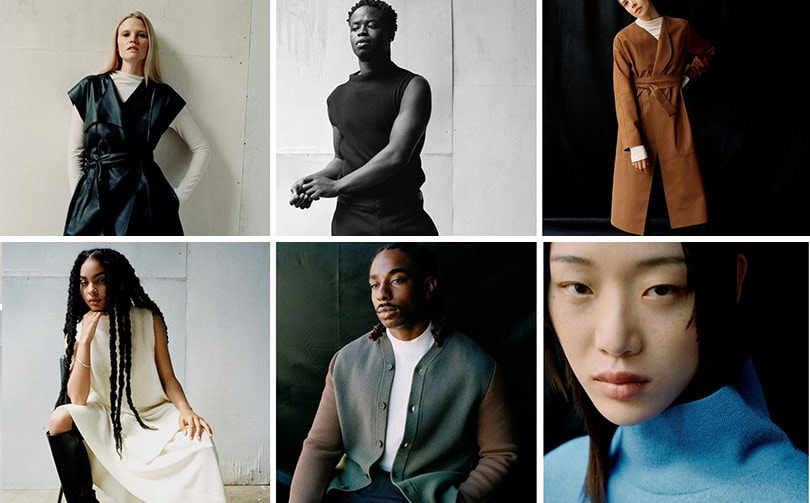 COS is pleased to present its latest campaign, New Perspectives, featuring the Autumn Winter 2020 collection shot by acclaimed photographer Jack Davison and styled by Clare Richardson. The campaign shines a light on key members of the creative community and celebrates what they stand for.

From visionary stylist Ibrahim Kamara, to models Lara Stone and Sora Choi, poet Greta Bellamacina and artist Rhea Dillon, to ballet dancer Isaac Hernández – the campaign features a diverse mix of fifteen creative individuals captured in a series of portraits in Davison’s iconic style. United by their strong values and ideas, the cast reflect COS’ celebration of contemporary culture and vision for a better future.

The COS Autumn Winter 2020 collection merges innovative properties with traditional techniques to form redefined classics, devoted to lasting style and longevity. Key looks are featured in the campaign, muted neutral colours of cream, beige and tonal greys that build the foundation of the season, contrasted with electric blue, faded primrose and pine green.

Tying in with the new season, the COS Magazine will relaunch in a digital format, reflecting the campaign theme of New Perspectives in its first monthly issue. Features will cover a wide range of topics related to interesting people, places and things.

Inspired by the arts and contemporary culture, the London-based fashion brand is known for collections that balance innovative design with enduring style, with every piece made to last beyond the season. COS creates modern, functional and considered design for women, men and children and has supported the arts since the launch of the brand through collaborations with established and emerging artists, galleries and creative studios.

Jack Davison (b. 1990) is a London-based photographer. He studied English Literature at Warwick University but spent most of the time experimenting with cameras. Since the age of fourteen he has continuously photographed those around him. He works for numerous publications including New York Times Magazine, M Le Monde, Luncheon, Double and British Vogue. His first monograph ‘Photographs’, was published in 2019 by the publisher Loose Joints. He released his second book ‘Song Flowers’ in collaboration with Loose Joints and the fashion house Marni this year.

ABOUT THE CAMPAIGN CAST

As founder of Inc Arts, Amanda Parker is an activist who pushes for change in the arts world, by lobbying government and arts leaders for increased diversity in theatre, opera, dance, museums and the visual arts. She began her career in TV journalism and programme making, where she helped set up BBC Radio's 1xtra. Parker went on to lead the TV industry's first investigation into gender diversity in programme directing, which led to sector-wide change in hiring practices. She is also editor for the London Short Film Festival and has now directed her activism towards being an outspoken advocate for ageless style and beauty.

Ekow Eshun is a writer and curator. He is chairman of the fourth plinth commissioning group public art programme in the UK, and the former director of the ICA, London. He is the author of Africa State of Mind: Contemporary Photography Reimagines a Continent and Black Gold of the Sun, which was nominated for the Orwell prize. Eshun’s writing has appeared in publications including the New York Times and GQ Style. He is the former Editor-in-Chief of Arena magazine and former Deputy Editor of the Face magazine. He has been listed by the Evening Standard as one of London’s 1000 most influential people.

Greta Bellamacina is a British poet, actress and filmmaker. She was born in London and trained at RADA before going on to do a BA. in English at King’s College London. She released her first documentary ‘The Safe House: A Decline of Ideas’ in the UK in May 2016. Greta wrote, directed and played the lead in ‘Hurt by Paradise’, her debut feature film. She is currently set to play the lead in Jamie Adams’ new film ‘Venice at Dawn’. Greta was short-listed as the young poet laureate of London in 2014 and since then her poetry has gone on to be acclaimed internationally.

Known for his radically innovative work, Ibrahim Kamara has been described as one of the most exciting creative voices of a generation. His distinct point of view is daring, marrying high fashion with the wholly unexpected. Striking the perfect balance between curated looks and bold artistic direction, Kamara elevates his styling into art. Although he was born in Sierra Leone, Kamara spent his childhood in Gambia. At age 16, he moved to London, where he later attended Central Saint Martins. In 2018, Kamara was appointed Fashion Editor at Large for i-D magazine, and his editorial work has also been featured in multiple publications.

Isaac won the prestigious Prix Benois de la Danse 2018 in the category ‘Best Male Dancer’, given out at Moscow’s Bolshoi Theatre. He has held guest artist positions at the Paris Opera Ballet, the Mariinsky Ballet (Russia), Rome Opera Ballet and Teatro Colon (Argentina). Prior to joining the English National Ballet as a principal dancer in 2015, he was part of the Amercian Ballet Theater, San Francisco Ballet and Dutch National Ballet. In total he is the winner of thirteen gold medals and three grand prix in the most prestigious competitions worldwide.

Jack Draper is a rising star on the ATP tour and at just 18 years old, is the future of British tennis. a charming (but cheeky) personality, with dashing good looks, He is tipped for huge success both on and off the court. A finalist at Junior Wimbledon in 2018, he has since gone on to clinch 5 ITF titles. He loves music and is a huge Oasis fan.

Jonas Glöer is a German model. He was born and raised in Hamburg and began modelling at the age of 18 in 2013. He lives in London.

Born in New Jersey, Kaya Wilkins grew up on a peninsula outside of Oslo, Norway, where she learned to play guitar with her brothers, members of a local black metal group. Kaya’s breathy, innovative musical style developed during Norway’s brutal winters, and in her own words, her compositions exist as "theme songs for whatever the opposite of self-destruction is.” Her latest releases include a debut album featuring a celebrated cover of Cher’s “Believe. In 2017, Kaya emerged as a talent to watch within the film industry with her debut performance in Joachim Trier’s supernatural thriller “Thelma.”

Supermodel Lara Stone was born and raised in the Dutch town of Mierlo located in southern Netherlands. Throughout her career as a model, she has worked with the fashion industry’s best, in all facets of the business. Photographers including Steven Meisel, Mert & Marcus, Inez & Vinoodh, David Sims, Craig McDean and Mario Sorrenti, have shot Lara for covers of prestigious magazines such as US, French, Italian, Japanese and British Vogue, W, i-D and many more. Lara is also a prominent feature on the world’s runways, walking for internationally renowned luxury brands.

Marte Mei van Haaster is a model and one half of art duo Max/Mei, formed with Max Daalhuizen. At the core of their work is an interest in the transition from nature into culture, artificially created to naturally grown, control to coincidence. Creating circumstances in which the work evolves or transforms over time, by interaction from the audience, natural processes or others forms of growth and decay. They travel far and close to make location-based works influenced by the local thematics and opportunities of their destination. Creating temporary installations as interventions in public or common space.

Rhea Dillon is an artist, writer and poet based in London. Using video, installation, photography, painting and olfaction, she examines and abstracts her intrigue of the ‘Rules of Representation’ as a device to undermine contemporary western culture. She is particularly interested in the self-coined phrase ‘humane afrofuturism’ as a practice of bringing forward the humane and equality-led perspectives on how we visualise black bodies. Her work has been featured at Somerset House and The British Film Institute, London, Red Hook, New York, and Sanam Archive in Accra, Ghana. She is an Associate Lecturer at Central St. Martins, London.

Sang Woo Kim is a British-Korean artist who studied at Central Saint Martins in 2012 and then went on to study Fine Art at Goldsmiths University. Raised in London with traditional Korean parents, he explores and confronts the alienating cultural factors that affected him from a young age. Sang looks at a much discussed and relevant topic; identity, mainly first-generation immigrants and their struggle with cultural duality. He brings awareness to this conflict and expresses it poetically and with a sense of irony and humour. Sang Woo Kim showed his first solo exhibition ‘If you see me now you don’t’ in January 2017.

Also known as ‘Shaq’, British Trinidadian Poet, Illustrator and multi-disciplined Fine Artist uses his art and poetry as a platform to create a safe community for discussing sensitive topics such as mental health and race. Alongside his incredible creative talents, Shaq has worked with many luxury fashion brands. Shaq showcases his unique approach to fashion and art on hit series PAQ, which covers men’s fashion and streetwear. Presented with his peers Danny, Elias and Dexter, each episode sees them undertake a challenge. such as playing sports in expensive sportswear or scouring charity shops to find an outfit in two hours on a tiny budget.

Sharon Alexie is 19 years old from Reims, France. Her family is from Cameroon. While exploring her digital creativity she became infatuated by the civil rights movement in America and all the music, art and literature that resulted from it. She used her digital platform to share what she was learning and opened up about her experiences on the topic of race and diversity. Inspired by all that she was learning she also decided to try another creative outlet and experimented with oil paint. Sharon is working on a program to help bring about change within France and uplift the youth who are still systematically oppressed.

Sora has walked countless runways, and acquired the most impressive list of editorial work, being shot for American, Korean, Italian and Chinese Vogue and i-D magazine amongst others, as well as featuring in many luxury fashion campaigns. Sora’s world is occupied by the things she loves most - fashion, friends, and her husband. Prior to modelling she was just a “normal” girl going to school, she hadn’t considered modelling but in the moments of walking her first runway it felt like a lightning bolt solidifying the purpose it brought into her life. She’s also a fan of comics, RPG games with cool graphics, anime and manga.