According to industry predictions, Chinese consumers will account for more than 30 percent of all luxury purchases worldwide in 2014 and even 50 percent by 2020. Many of those purchases are made abroad while on a pleasure or business trip as Chinese consumers are the world’s top tourism spenders 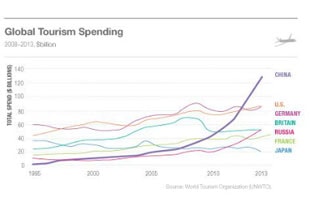 Looking at the figure below, one can clearly see that while the tendency of the other countries in terms of consumer spending abroad is on an upward trend (with the exception of Japan), none is as dramatic as that of Chinese tourism spending from 1995 to 2013 as the number of Chinese going abroad increased dramatically as well.

Chinese tourists lead by per transaction spending as well

An astounding fact that should be kept in mind is that currently, only five percent of Chinese citizens hold a passport, opening the potential for future growth tremendously, especially in view of an ever expanding Chinese middle class ready to explore the world.