If the Berlin Fashion Week was an indicator for the direction the fashion industry is headed to, optimism seems to be in order. The major fairs came up with excellent news. The Premium Fair which covers a broad range from ready-to-wear clothing to couture,

reported new record numbers. The number of collections displayed on the fair climbed to 950. Compared to last season, the number of visitors registered during the three-day event grew from 41‘800 to 46‘700. 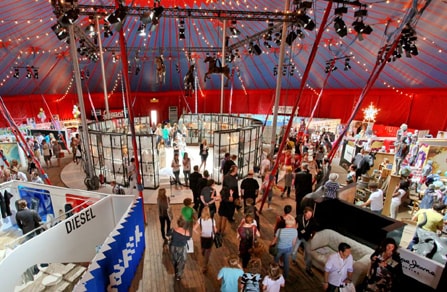 In addition, the fair became significantly more international: whereas in July 2009, 62 percent of trade visitors hailed from the German-speaking region, this year’s number was around 45 percent. Strikingly, the number of buyers from Japan, China, Russia and the USA climbed from one to five percent. Their growing interest was also observed during some shows within the scope of the Mercedes-Benz Fashion Week.

But not only the mere results are impressive: the mood among visitors and exhibitors was excellent. For many, this was also reflected in the number of orders. “The bustle at our booth was enormous. Many existing as well as new customers looked at our 2011 summer collection and fixed dates for the showroom directly”, explains Melanie Bauer, sales manager for Berlin’s luxury label Michalsky, represented at Premium for the first time. Ultimately, Michalsky succeeded in increasing the order volume in Berlin by 62 percent, compared to the previous year. The label will also be
featured in Munich and Düsseldorf in the near future.

The denim and street wear fair Bread & Butter does not publish visitor numbers. However, already on the second day, fair executive Karl-Heinz Müller expressed his mood with “very happy“. The fair uncovered an important new growth potential by presenting children’s fashion: “Kids Camp” was launched for the first time. It is expected to be expanded in the coming season. Starting in January 2012, the Bread & Butter officials are planning to organise a special children’s fashion fair on a separate date.

With its relocation from Frankfurt to the capital, the skater wear fair Bright made for a fulminant debut in Berlin. The organisers welcomed a total of 12‘600 trade visitors to the event – significantly more than expected. Compared to the last show in Frankfurt, the visitor number grew by 150 percent. According to the coordinators, the success was also due to the significantly greater international popularity – 40 percent of visitors came from abroad. One of the main reasons why the fair organisers choose Berlin is because the capital is particularly attractive for international buyers.

Although Berlin receives the greatest media feedback, the other tradeshow sites in Germany should not be overlooked. The events organised by Munichfashion.company in Munich have been growing for years. Munichfashion.women which will be held between 14 and 17 August had already produced more than 700 brands in January. Not bad for a fair launched only three years ago with just 170 collections.

The organisers are poised to continue the upward trend: “We are confident that we will be able to continue the success of the previous season. Growing visitor and exhibitor numbers not only confirm our trade fair concept, but they also make a significant contribution in strengthening Munich’s position as a fashion site“, explains Aline Schade of Munichfashion.company.

Düsseldorf‘s CPD is also on the verge of consolidating itself. During the past years, the former flagship of Germany’s fashion fairs has lost a fair share of its grandeur and significance. At some point, it was even discussed to end the event. But the demise appears to have been avoided for now: the visitor numbers climbed in February and with 950 collections, the organisers are able to report at least an increase of 5 percent for the August edition compared to last year. The state capital of North Rhine-Westphalia was never considered a fashion site anyway. The number of showrooms is far too large and Munichfashion.company as well as Berlin’s fair Premium are also on site presenting their own events.

From our correspondent in Berlin