With the World Cup poised to kick off this Thursday, sportswear retailers around the world are scrambling to use event to showcase their products and brands. For sportswear labels such as Nike, Adidas and Puma there is no better podium to reach their target audience, which has led to the retailers

investing millions of euros on targeted television advertisements, newspaper campaigns and online ads, to make sure they stand out from the competition. 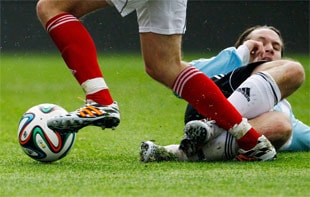 German sportswear label Adidas is adamant that it is still the “top dog” when it comes to the football market. Chief executive officer Herbert Hainer notes that including shoes, shin guards and football sales in the run up to the World Cup, sales will “definitely” reach a record amount of two billion euros. US rival label Nike is predicting to reach two billion dollar, or nearly 1.5 billion euros.

Although both sportswear labels are contending for as much visibility as possible at the World Cup, Adidas has a “home advantage” as official partner and supplier for FIFA, and all referees, ball boys, game officials and volunteers will be wearing uniforms bearing its logo, as well as the nine teams being sponsored by Adidas.

As one of the World Cup sponsors, the German sportswear label has designed the ball for each of the tournaments since 1970, with this year's edition designed in Herzogenaurach. Adidas also had the additional benefit of being able to directly place its advertisement in the stadiums and immediate vicinity.

Nike's confident they will "stand out on and off the pitch"

To make up for lost advertisement, Nike is sponsoring more teams, including the host team Brazil, the Netherlands, the UK and US. In total, ten teams will be wearing uniforms that bear Nike's iconic logo on their chests, including hundreds of other players who will wear Nike shoes. “We're confident we will stand out on and off the pitch better than any other brand,” said Dermott Clearly, global vice-president and general manager for football at Nike.

Not to be left out, Puma has a contract with a number of the athletes participating in the tournament and has eight teams wearing its kits, despite the German company holding eight percent of the global football market. However unlike its peers, Puma has not invested in a global advertising campaign during the World Cup. “The World Cup is an important platform for us to present ourselves,” commented chief executive officer at Puma, Björn Gulden.

But Puma has chosen to focus its marketing tactics on sponsoring individual players like Italy's Mario Balotelli and Spain's Cesc Fabregas this World Cup, who will be wearing the labels Tricks, one blue and one pink shoe, instead of launching a full blown campaign. “With the World Cup coming up, so many businesses are using it as an advertisement angle, even rental car agencies and credit card companies,” Gulden explains, adding that Puma has decided to launch its global campaign begin this August, after the event has ended in order to boost flagging sales. 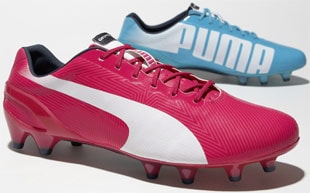 Not to be outshone on the field, Adidas has developed the World Cup “Battle Pack,” which consists of four different shoes that are suitable for different athletes, in a striking black and white print with yellow-orange stripes. “This is is biggest campaign we have ever done, one we have invested an awful lot of money in,” says Hainer. “Tens of millions” of euros have been invested in the products advertising, marketing and social media campaigns.

In contrast, the German sportswear label has spent “almost no money” on print ads. Instead Adidas has taken on three dozen social media agents to promote Adidas players and products online during the World Cup. Nike has also turned to online social platforms such as Facebook, Twitter, Instagram and Youtube to promote its new footwear styles, using an “individual approach to speak to the masses.”

“As far as the World Cup itself goes, Adidas' position in the fold, I would argue, probably presents a stronger proposition,” commented Andrew Walsh, the London-based director of enterprise services fir Repucom to the Associated Press. “But that doesn't mean that over the longer term, and there's more of a slow-burn strategy, that Nike isn't going to continue to make inroads into the [football] market,” he added, as the US sportswear brand continues to use its social media strengths and “personality marketing” based around the sporting world's athletes to play catch up to Adidas.