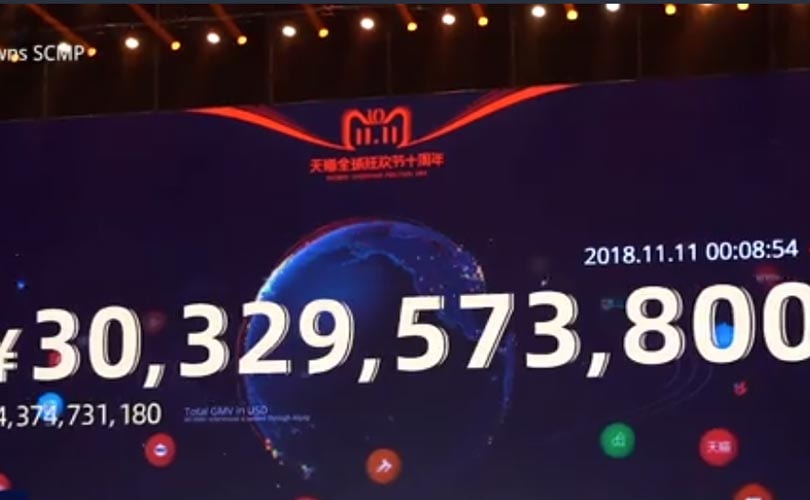 Alibaba breaks its own sales record during Single'sDay

"Today we reached 200 billion (yuan). But we have to change. We have to continue to change to reach 300 billion or 500 billion," said chief executive Daniel Zhang in a corporate release.

According to Chinese media, Alibaba recorded circa 10 billion dollars in sales in the first hour after midnight. This helped the Amazon’s competitor to surpass last year's full-day sales record of 168 billion yuan in just under sixteen hours.

It’s worth recalling that in barely eight years since it was launched by Alibaba, Singles' Day, also called "Double 11", has become the world's biggest online sales event, outperforming the sales of U.S. shopping holidays Black Friday and Cyber Monday combined.

Despite the record haul, the annual sales growth rate fell from 39 percent to 27 percent, at the low end of analyst estimates gathered by Reuters. And the smallest rate in the event's 10-year history according to ‘Nikkei Asia’s Review’.

The market is watching closely, as the largest online retailer in China is grappling with a weaker slimmer sales outlook - earlier this month it revised down its full-year sales outlook by 4-6 percent. The reduced outlook tanked the stock, which has dropped roughly 16 percent this year after almost doubling in 2017.

Analysts said the sales continue to be cannibalised by competing events, including the "618" festival spearheaded by Alibaba competitor JD.com Inc in June, reported Reuters, citing Pedro Yip, partner at consulting firm Oliver Wyman. "With an increasing number of promotion events a year, consumers no longer feel that Double 11 is the only opportunity to get good bargains," said Yip. "Having said that, there are more consumers who still enjoy shopping at double 11 than those that don't," he added.