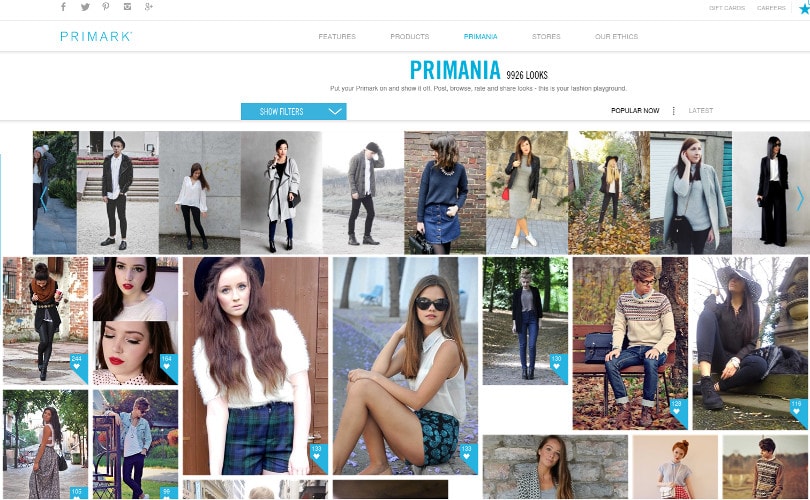 London - Most mass market fashion retailers today would agree that e-commerce plays a vital role in guaranteeing success by fulfilling their customer's demands. However, there is one Irish value fast-fashion chain which has managed to succeed in Europe without the aid of an online store, namely Penneys, better known as Primark.

However, do not be fooled into thinking that Primark’s lack of an online store means a total lack of an online presence. On the contrary, Primark has managed to create an incredibly active online following known as ‘Primania’ without the aid of any e-commerce arm. It’s online platform invites customers from all over the world to share photos and images of their Primark outfits to Instagram with the hashtag #Primania, which are subsequently shown in its LED store displays across Europe and the US.

No time to read the whole story? Click here for the 30-second-version: the chart presents our Primark financial forecast: estimated income and results for 2016 - 2019 when opening an online store this year. Interested in the analysis? Scroll further down then.

#Primania used to drive more customer to stores - but would Primark be better of with a real online store?

Primark currently has millions of followers across its core social media platforms, like Facebook and Instagram and its Primark.com platform attracts over one million visitors each week. In addition, by engaging with popular bloggers such as WeWoreWhat’s Danielle Bernstein and ItsMyRayeRaye Raye Boyce, Primark is also able to share outfit inspiration and brand recognition with a wider audience, who may not be familiar with the brand due to a lack of its physical store presence. And although the value fashion retailer did not quite make it into the top ten of FashionUnited’s most popular fashion brands of 2015, it still ranked in at number 21 - quite an achievement for a label lacking an online store.

“Social media plays an important part in the way our customers live their lives and is an increasingly effective way of broadcasting the excitement of the Primark brand far and wide, thereby enticing more customers into our stores more frequently,” commented Primark’s CEO George Weston in its parent company Associated British Food 2015 annual report. But in spite of running a very clever and savvy social media strategy the question remains - is Primark truly missing out on additional profit due to a lack of e-commerce? Or does its lack of e-commerce, paired with a unique social strategy only drive traffic and sales in its stores? FashionUnited takes a closer look.

In order to determine what percentage online sales can contribute to the overall income generated by Primark, FashionUnited examined the percentage of revenue stemming from online sales at comparable, international high-street fashion retailers, namely: Uniqlo, H&M, Inditex, TJX Companies, American Eagle, Next, Urban Outfitters, American Apparel and United Arrows. All of the listed fashion retailers have a mature, international online market, as well as an established online presence. Each fashion retailer’s presence on social media, their online engagements and sales will then be compared to their annual online sales. Then this analysis will be compared to Primark’s online followers and engagement in order to calculate what their potential online sales results would be.

According to FashionUnited’s calculations based on these 9 fashion retailers, e-commerce contributes on average 13.3 percent per year to the company's total sales. However, this percentage is also based on a mature e-commerce platform, which takes 4 year to mature before it stops growing exponentially. This mean that even if Primark launches an online store, it is likely to take them 4 years to generate 13.3 percent of the revenue via its e-commerce arm. In 2015 Primark achieved a revenue of 7,8 billion dollars and an estimated yearly growth of 7 percent in revenue according its parent company’s Associated British Foods annual report. Based on these figures, FashionUnited has calculated that if Primark does indeed open an online store in 2016, it will earn an estimated 140 million dollars in sales in its first year. By its fourth year, when it’s e-commerce market has matures, this amount will have ballooned to a cool 1.35 billion dollars - not too shabby at all.

However, launching and maintaining a fully functional online store also introduces additional costs to a fashion retailer, ranging from packaging and shipping to returns. Looking at the average costs spent by the 9 retailers analysed, the price of operating an online store comes in at 8.5 percent of the total annual revenue (including the online revenue). Therefore according to FashionUnited’s calculations, it will cost Primark approximately 985 million dollars a year to run its e-commerce business. In addition, the start-up costs for launching an online business are expected to account for 50 percent of the yearly costs, according to audit reports from PricewaterhouseCooper, finance consultancy firm.

This means that Primark’s start-up costs will amount to an additional 790 million dollars in its first year of running an online store - ultimately resulting in a loss for the fashion retailer as a whole of 625 million dollars during year one of its e-commerce business. Although Primark will have a small profit during its second year of running its online store, the overall operational costs will still have a negative impact on its annual profits. Only when its e-commerce business has fully matured by its fourth year of running, will the online store become a profitable addition for the value fashion retailer. By then, Primark’s profit margin will have grown from 7.5 percent to 13.3 percent.

Based on these calculations, Primark’s decision to steer clear of launching an online store seems to be the right choice for the value fashion retailer. The operational costs of running an international online store will ultimately costs the company more than its return in the first three years, with the first year leading to a loss for the entire company. In the first year of running an online store, the total expenses of its e-commerce business will cost Primark over 1.3 billion dollars. The second year of operating its online store will cost Primark approximately 685 million dollars and its third another 350 million dollars, which together comes to a total costs of 2.4 billion dollars spent before the online store becomes profitable for Primark. This is in part due to Primark mass production business model, which it uses to keep its prices as low as possible, but also would mean that the company would need a large mass distribution of online products as well before it can be profitable.

If all goes well with Primark’s online store, FashionUnited predicts it will be profitable in its fourth year of existence, generating an income of 365 million dollars. After this point, overall revenues are likely to keep increasing, which means it will take Primark a total of 5 years to earn back the initial investment on its online store. However, based on our calculations, it is clear from this assessment that there is little room for any error, as Primark profit margins are rather low. If its overall sales growth declines, or decreases for whatever reason, then it may take the value retailer up an additional 7 to 9 years to earn back its investment in its online store. Therefore, in spite of increasing appetite for shopping online launching a digital store remains a risky step for Primark to take, a decision Primark seems to agree with as after an initial testing phase selling its products via British fashion e-tailer Asos, the value retailer decided to stay clear of online stores.

But if Primark does decide to ever take the plunge into the world of online shopping, then at least they are in a rather good position to kick start its online business, as demand for Primark and interest in #Primania has yet to be satisfied.