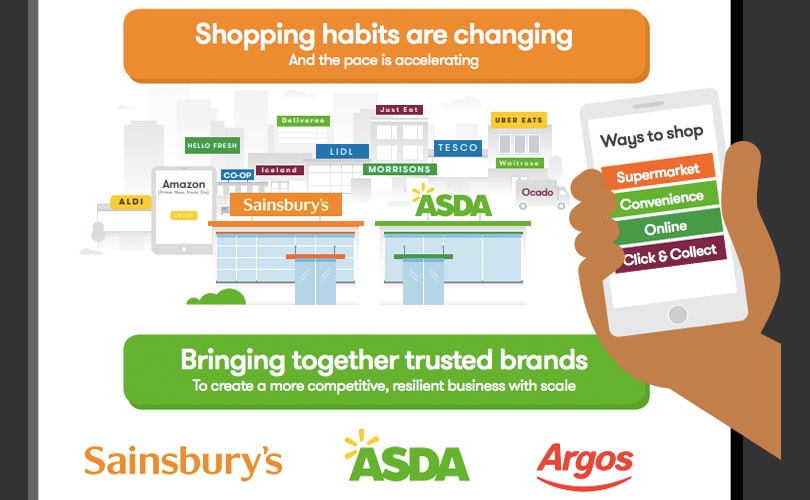 J Sainsbury Plc and Walmart Inc. have agreed to a proposed combination of Sainsbury's and Asda Group Limited, a wholly owned subsidiary of Walmart, to create an enlarged business. The news of merger between Sainsbury’s and Asda, according to The Guardian, led the Britain’s stock market to its highest level since the start of February. The FTSE 100 gained 37 points or 0.5 percent to 7539 this morning with Sainsbury’s leading the way, up 17 percent at a four-year high.

Commenting on the combination, David Tyler, Chairman of Sainsbury's, said in a statement: "We believe that the combination of Sainsbury's and Asda will create substantial value for our shareholders and will be excellent news for our customers and our colleagues. As one of the largest employers in the country, the combined business will become an even greater contributor to the British economy."

Sainsbury’s said in a media statement that the combination will result in Walmart holding 42 percent of the issued share capital of the combined business and receiving 2.975 billion pounds (4.085 billion dollars) of cash, valuing Asda at approximately 7.3 billion pounds (10 billion dollars). The company added that it expects to lower prices by 10 percent on many of the products customers buy regularly after the merger.

"This is a transformational opportunity to create a new force in UK retail, which will be more competitive and give customers more of what they want now and in the future. Having worked at Asda before Sainsbury's, I understand the culture and the businesses well and believe they are the best possible fit," added Mike Coupe, Chief Executive Officer of Sainsbury's.

According to the statement, the combination will create one of the UK's leading grocery, general merchandise and clothing retail groups, with combined revenues of 51 billion pounds (70 billion dollars) for 2017. The merger will maintain both the Sainsbury's and Asda brands and enable them to sharpen their distinctive customer propositions and attract new customers. It will create a complementary network of more than 2,800 Sainsbury's, Asda and Argos stores and several of the UK's most visited retail websites, to create greater choice for customers through more store formats and channels, with a combined 47 million customer transactions per week.

"The combination of Asda and Sainsbury's into a single retailing group will be great news for Asda customers, allowing us to deliver even lower prices in store and even greater choice,” said Roger Burnley, Chief Executive Officer of Asda.

The company added that the combination will enable investment in areas that will benefit customers the most: price, quality, range and creating more flexible ways to shop in stores and through digital channels, across Sainsbury's, Asda and Argos and will generate net EBITDA synergies, post investments in price, across the enlarged group of at least 500 million pounds (686.7 million dollars). There are no planned Sainsbury's or Asda store closures as a result of the combination.

Further commenting on the combination, Judith McKenna, President and Chief Executive Officer of Walmart International, said: "This proposed merger represents a unique and bold opportunity, consistent with our strategy of looking for new ways to drive international growth. We believe this combination will create a dynamic new retail player better positioned for even more success in a fast-changing and competitive UK market."