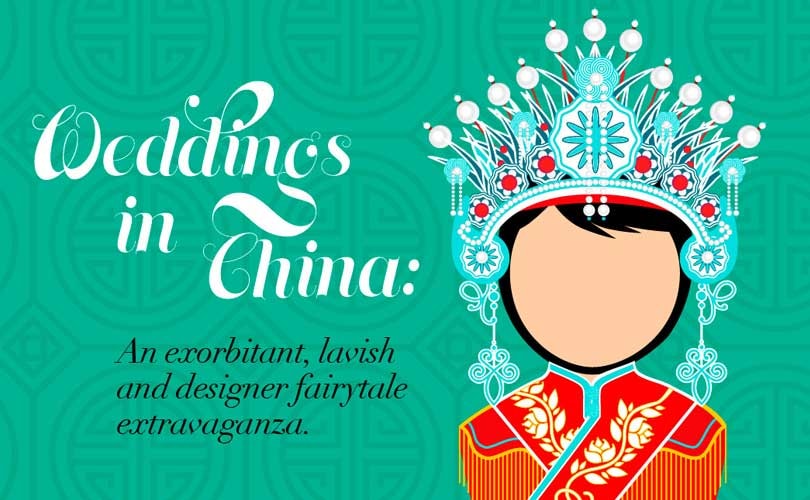 Weddings in China: An exorbitant, lavish and designer fairytale extravaganza

Most of the studies indicate that weddings in China are considered to be a once in a lifetime opportunity to splurge on everything from wedding dress and photo session to return gifts. Western culture swept into China three decades ago when the communist country welcomed foreign trade. And western brands and ideas have begun influencing China’s booming middle class over the past decade. Chinese couples today are moving towards more luxurious western-style weddings complete with a solitaire and a designer and luxurious white wedding gown for the bride and impeccable black suit for the groom. This situation means a huge opportunity for foreign brands eyeing the Chinese wedding market.

As per the China Wedding Industry Development Report, the wedding industry in China accounts 80 billion dollars and is expected to continue to increase over the coming years due to the rising wealth in the Asian giant. Chinese couples spend an average of 12,000 dollars on their wedding and there are more than 10 million weddings in the country every year. Therefore it is estimated that the wedding industry will reach a size of 120 billion dollars in the next few years.

No time to read the whole article? Click here for the 10-second version.

An increasing number of Chinese couples is ready to spend a small fortune on their special day by blending western traditions with their own traditional customs and rituals. This has created a giant wedding market in China worth between 50 billion dollars to 80 billion dollars. 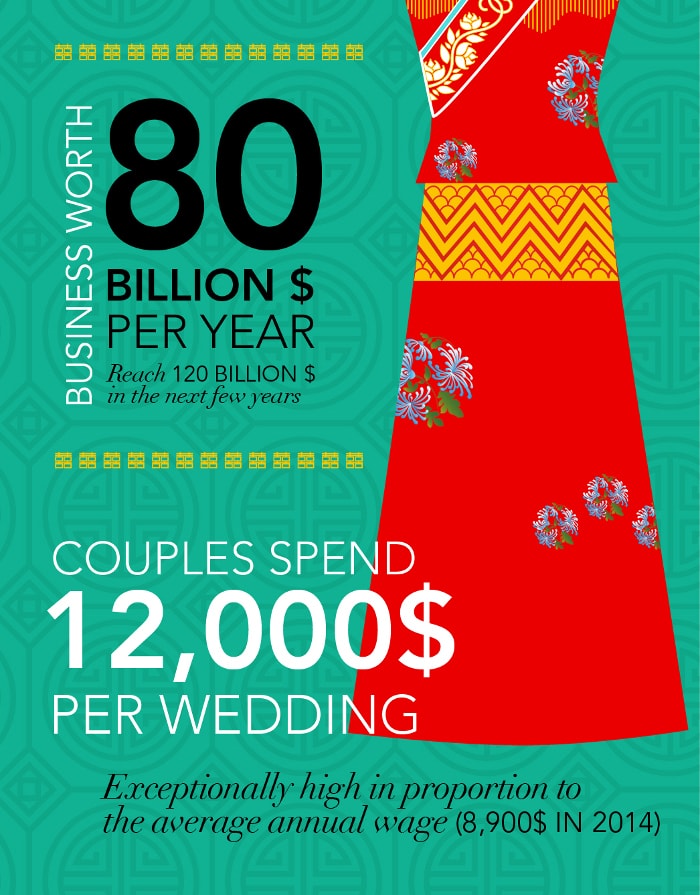 To give an example of the opulence of the weddings in China, when actress and model Angelababy married actor Huang Xiaoming recently, she flaunted a bespoke Dior dress that supposedly took almost six months to create along with two more haute couture gowns from Elie Saab. A 1.5 million dollars five-carat diamond ring by Chaumet adorned her finger. With almost 2,000 guests in attendance, who witnessed the couple exchange vows and cut a 10-foot tall carousel-shaped wedding cake, industry experts estimate the cost of this lavish gala to be around 31 million dollars.

As per the China Wedding Industry Development Report, the average Chinese wedding costs 12,000 dollars, which though it is still behind markets such as USA, Australia, UK and Japan, is exceptionally high in proportion to the average annual wage, which for urban dwellers was 8,900 dollars in 2014, government data showed. In comparison, the average US couple spent 26,444 dollars on their wedding, according to the Wedding Report, just under half of the median annual salary of 53,657 dollars, according to 2014 US Census Bureau data.

While once upon a time, a Chinese wedding was meant to be a big dinner party, it has now adopted several Western elements along with the traditional customs. Dancing is rarely a part of Chinese weddings but several entertainment acts, such as fire-breathers or a Sichuan style mask-changing show are hosted to entertain the guests. A decade ago there was no diamond engagement ring or a white wedding dress in China but today both have entered the wedding industry. No wonder, in the last five years, British bridal and eveningwear brand Jenny Packham sensed the opportunity and launched an exclusive collection of petite bridal gowns catering to the Asian market. The brand has also designed a special collection for the region in red, the traditional colour of weddings in China symbolising good luck.

Another distinct feature of a modern Chinese wedding that unlike western brides, who spend a lot of time in finding that unique dress for the wedding, in China, it is about finalizing almost three, four, or even five gowns, of which some are even rented for a pre-wedding photo shoot. A typical Chinese bride begins her D-day wearing a traditional Chinese attire called qua , a red and gold phoenix-embroidered dress for the tea ceremony. Then she changes into a white dress followed by another two-three outfits for the reception — maybe a western-style evening gown and a qipao . 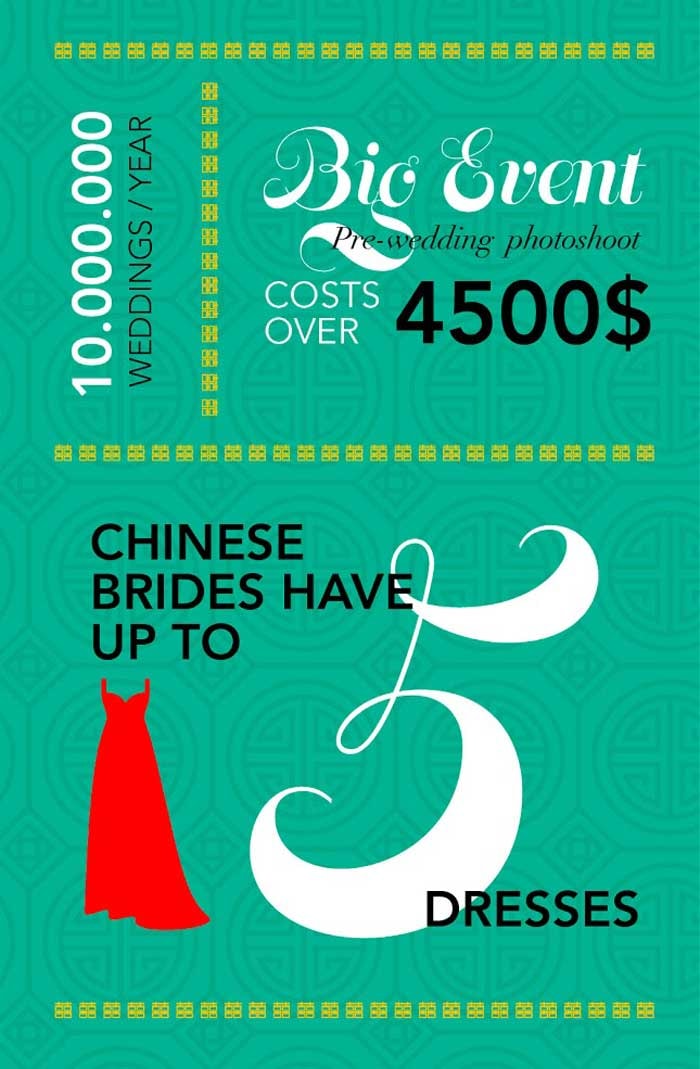 However, the big event is the pre-wedding photoshoot; which includes an elaborate session in different outfits and different locations including even the overseas ones such as Europe, especially France, the US and Southeast Asian countries like — Bali, Philippines or Thailand. And just the photo session can costs over 4,500 dollars.

According to the studies, increasing spend on weddings is led by the nation’s one-child policy, which was in force till recently, along with many other factors such as increase in disposable income and rising middle-class. So the young generation today, on either side of the family is the only child and since weddings are a family affair, along with two sets of parents from either side, four sets of grandparents may also contribute towards the single wedding. Also wedding guests contribute towards the celebrations as well: in China it is tradition to give newlyweds hongbao , or cash in red envelops, which covers a large part of the wedding expenses. To receive hongbao , couples also tend to organize multiple ceremonies, for which they purchase several dresses.

Although the ongoing economic crisis in China along with anti-corruption measures have made a negative impact on the country’s luxury spending weddings continues to remain a lavish affair among the growing middle class. According to management consulting firm McKinsey & Co over 75 percent of China’s population will be classified as middle class by 2022, up from 4 percent in 2000.

Though Chinese couples are willing to loosen their pockets on buying various outfits for their big event, Western brands also need to focus on attracting the right target demographic at the right time. American designer Vera Wang launched her first China store in Shanghai in 2013 and introduced a ‘fitting fee’ of 450 dollars to try the gowns, a non-refundable amount meant to be credited towards any purchase made at the store. While the store claimed that the fee was to provide a luxury shopping experience coupled with a personal shopping assistant and afternoon tea, it did not go down well with Chinese brides and ultimately the brand had to give up the policy since no other stores offering bridal attires charged on trial. Experts suggest that the rising middle class is the key for Western brands eyeing the Chinese market.

Today’s young and busy Chinese couples having high disposable incomes and willingness to spend a bomb on their D-Day and ceremonies associated with it, the wedding planners’ market has mushroomed in a big way. These studios play an important role in managing everything from functions, wedding dress rentals, sales and customization, and photography. The couple usually chooses a company which can offer a whole package of wedding services.

Launched in 2011, Weddings Beautiful China has more than 350 wedding planners across 39 Chinese cities. They cater to the wealthy young couples, mostly in their twenties based in cities such as Beijing and Shanghai. Experts say that the the wedding planning industry in China has grown so big that more than 1,000 wedding planning companies are registered in Beijing alone, according to China’s Committee of Wedding Service Industries. Weddings Beautiful China operates a training centre in Sanlitun that offers a 12-day wedding planner courses for over 3,000 dollars. 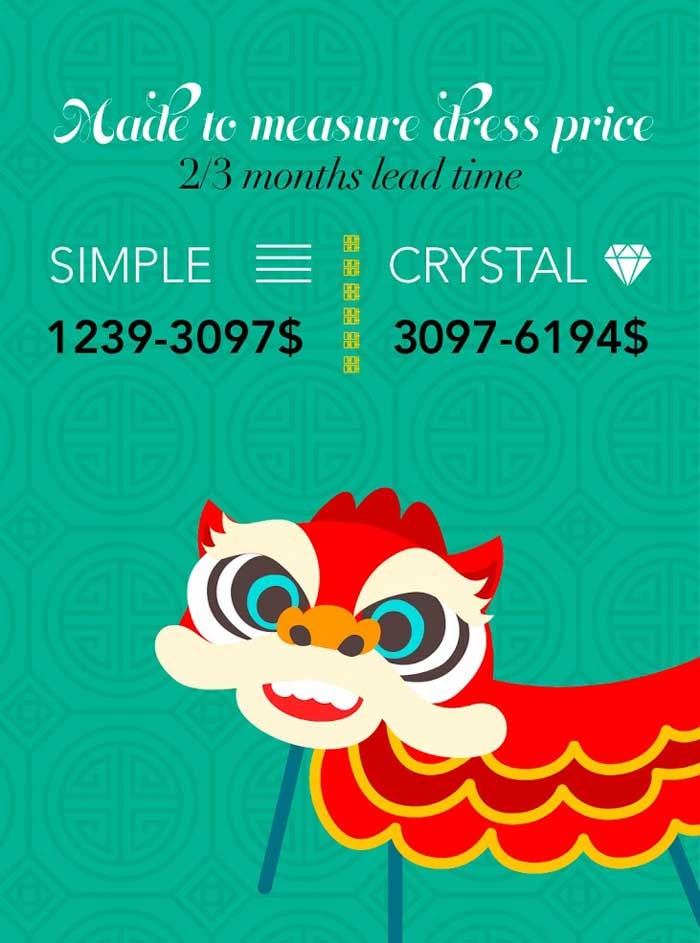 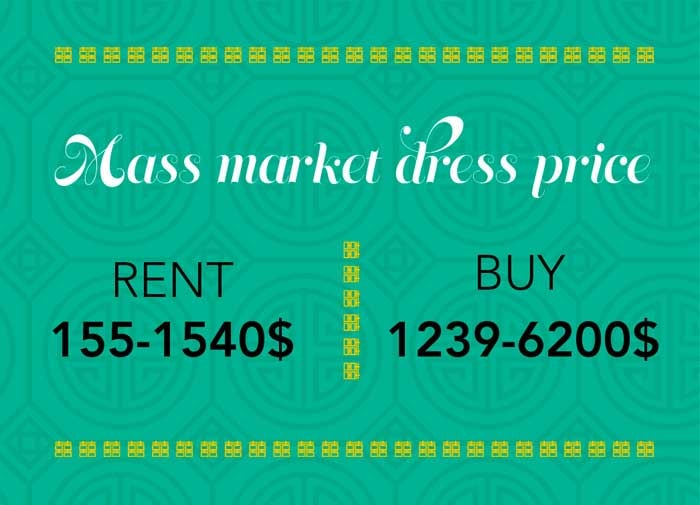 For example, wedding packages and services worth 1,686 dollars to 2,460 dollars (10,888 to 15,888 yuan) plus service charge for 100 to 350 guests include fully customised Chinese and western meals, menu tasting for four to eight persons, one exquisite wedding cake, homemade chocolates, pre-dinner drinks, imported wine on the table, five hours Rolls Royce transfer service, one night’s stay in a luxury suite for the couple, free one night’s stay in a luxury room on the first year wedding anniversary, spa experience, string quartet, VIP registration book, table flowers and VIP shoot in the hotel.

Sighting prospects of the honeymoon market, some agencies also specialise in providing services that integrate the honeymoon trip and wedding photography as well.

One important area, which Western clothing brands can explore, experts point out – is the clothing market for grooms. While exorbitant amounts are spent on buying clothes for the brides, grooms are yet to wake up to buying designer and made-to-measure attire for their special day.