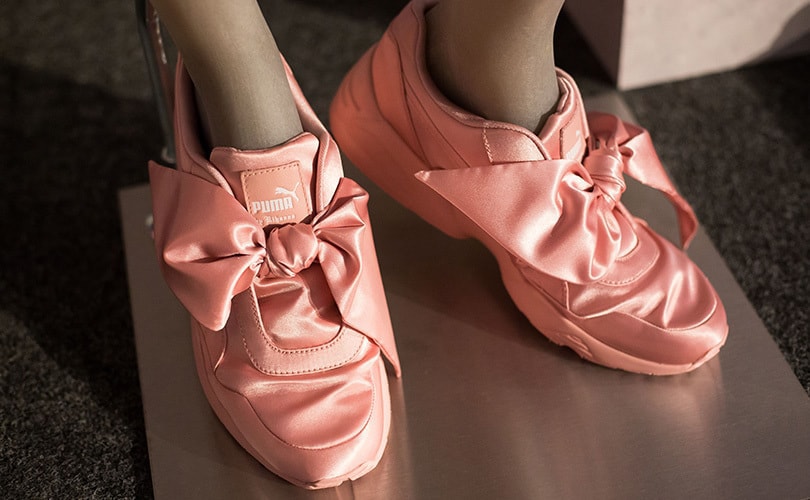 London - Sportswear label Puma is continuing its battle against Forever 21, as the label fears its copying of Rihanna's famed shoe designs for Puma are a threat to its business.

Forever 21 previously launched its own versions of Puma x Fenty by Rihanna Creeper sneakers, slide sandals with fur and slide sandals with a knotted satin bow, which are said to be nearly exact copies of the original designs made by Rihanna for her line with Puma. The sportswear brand took legal action against Forever 21 earlier this month and launched a copyright infringement lawsuit, as well as a design patent and trade dress.

Puma also requested a temporary restraining order against Forever 21 to cease all sales of its shoe designs, but a Californian federal judge ruled against Puma last week, stating the sportswear brand failed to show Forever 21 posed an immediate threat to its business. The judge stated that Puma failed to take legal action against Forever 21 immediately, even though it claimed to have known about its alleged shoe copies for sometime, thereby creating its own business "crisis" by applying for a temporary restraining order the day before its latest Creeper design launch.

However Puma is set to fight against the judge's ruling and in a Monday court filing stated that a "serial infringer" like Forever 21 was not easy to keep track off. The sportswear label maintained that it took legal action against the fast-fashion retailer within two weeks of learning of the extent of its copied shoe designs. “Puma intentionally produces a limited quantity of each Fenty shoe to ensure that the Fenty shoes maintain a reputation of an exclusive, luxury brand shoe. Puma’s marketing and production strategies also create desirability not only for the Fenty brand shoes but for the Puma brand as a whole,” Puma argued in its court filing according to WWD.

“When the Fenty shoes are associated with a cheap mass market product they are no longer regarded as a luxury item and they lose their brand appeal to consumers and so does the Puma brand as a whole.” Puma highlighted the recent launch of the Fenty satin bow slide, which was meant to be linked to Paris Fashion Week, but that Forever 21 ruined the launch by mass distributing an "identical knock-off of an exclusive luxury good." Puma noted that it has already seen lower than predicted sales of its Fenty shoes as a result of Forever 21 copies, and fears that its soon to be launched updated Fenty fur slide sans ales and other shoe designs are being threatened by Forever 21 copies.

"Without a preliminary injunction Forever 21 will be able to continue its pattern of infringement and capitalize on upcoming launches for the Puma Fenty shoes to the significant detriment of the Puma brand,” said Puma. The move comes not long after Puma acquired a trade injunction against Topshop, who is said to have been selling its own knock off versions of Rihanna's Fenty shoe designs.