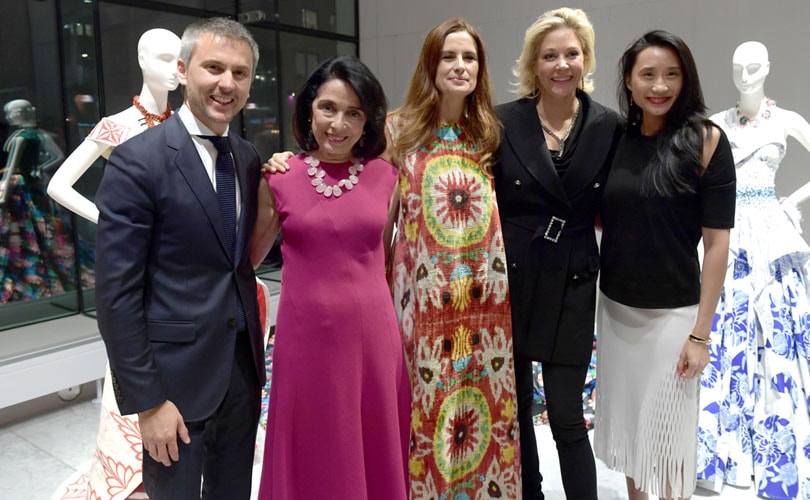 Works included ranged from a collaboration between Stella McCartney and Indian brand Oshadi featuring textiles dyed naturally by craftsmen in Tamil Nadu, an evening gown inspired by flora and fauna of island nations created collaboratively between Theodore Elyett and Catherine Rocheford, from the Bahamas and Barbados respectively and a wool dress trimmed with Maasai beading by Cameroon label Kibonen New York and Tanzanian Makory Mgece.

New York-based brand behno, which works with Indian artisans, represented India for the Commonwealth Fashion Exchange and teamed with five artisans from Tuvalu to create a sheer dress made with blue silk organza and black crochet kolose panels. The crochet panels were all crafted by the Tuvaluan artisans, using a technique popular to their region that is very intricate and took a month to complete.

“For the Commonwealth Fashion Exchange, our entire look was inspired by indigenous Indian embroideries that was taken from Persians and other parts of Asia,” behno founder Shivam Punjya said. “We’re inspired by how people have interpreted India in a modern way. I think the traditional is beautiful and i think a lot of people have inspiration but there’s also a whole different world to India that doesn’t necessarily make it into collections sometimes.”

The exhibition is currently on display at the Fashion Institute of Technology’s newly renovated Pomerantz Building. The exhibition is sponsored by Swarovski, The Woolmark Company, Matches Fashion, Paddle8 and Nest and is free to the public, running through October 8.