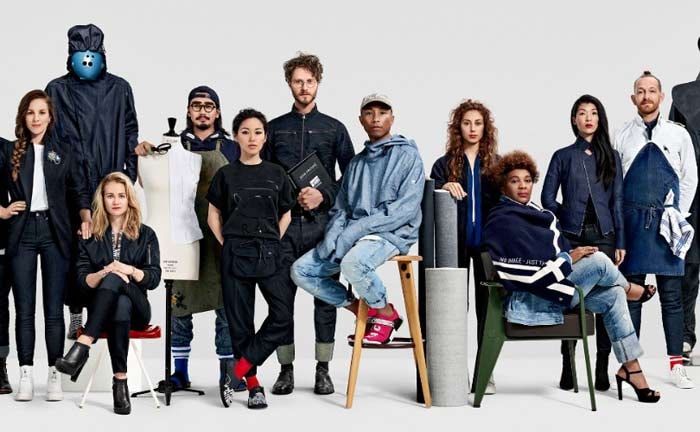 How do you tell the story of denim?

Amsterdam - One pair of jeans retails for as little as 20 euros - others as much as 500 euros - now try explaining that to the consumer. Denim is a complex product and the production process consists of many steps, all of which contribute to the final price tag. How does a denim brand explain to its customers how its products are made? How do you translate that ‘denim feeling’ to an image and to a campaign? That requires a fair bit of marketing know-how. FashionUnited asked the well-known denim labels Scotch & Soda Amsterdams Blauw, Denham the Jeanmaker and G-Star Raw: how do you tell the story of denim? 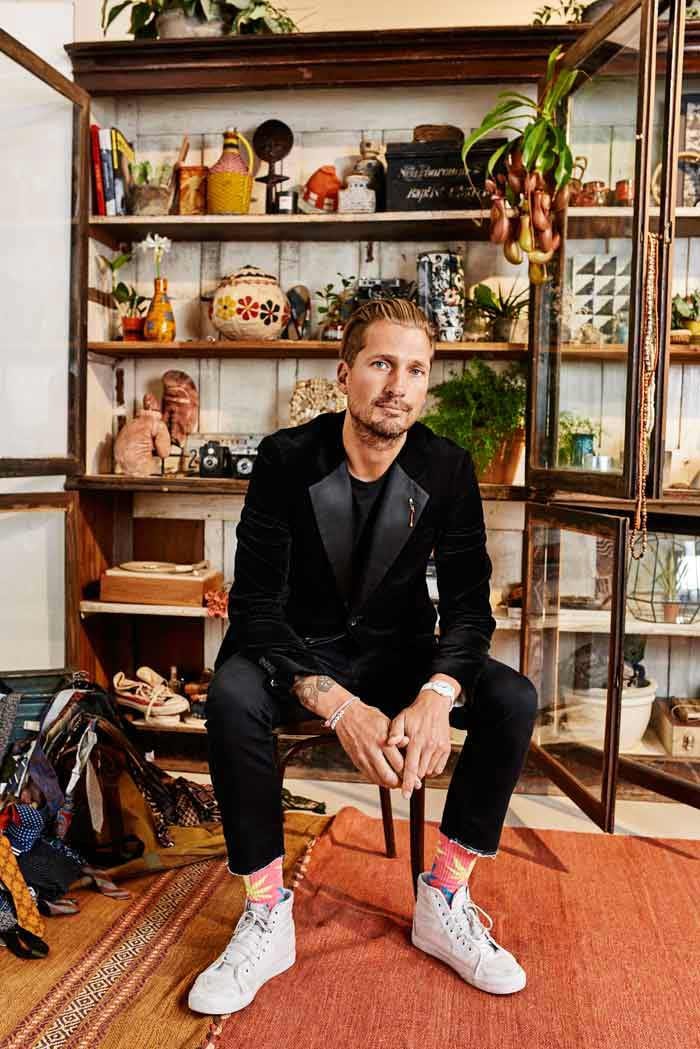 ”The first step in explaining the story of denim starts with everyone at Amsterdams Blauw having a denim heart,” Alex Jaspers, chief merchandise officer at Scotch & Soda, points out. He was there when the jeans line 'Amsterdams Blauw' was launched. “We’re the denim nerds with denim hearts. It’s not just about how you present it on the outside; it must be in your DNA.”

Everyone who works at the label must know the product well, understand its complexity and ‘get the details’, he adds. “All the people who work here have ‘blue blood'. That’s essential.” All staff at Scotch & Soda stores receive training at the Scotch Academy, the specialised training programme set up by the brand. “Our brand ambassadors, who have all been trained at the Academy, can tell you more about the material, what exactly it is you’re buying, and what the story is behind the material and the washing.” 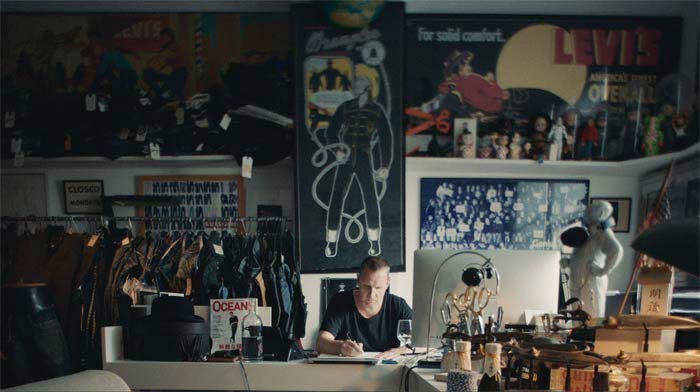 ”Denim is a very specialist product,” says Vivian Hartog-Holla, marketing manager at Denham the Jeanmaker. “The weaving process, the washes, the details and finishes make every pair unique. Consumers often don’t know what selvedge means, while this is simply a given for us denim professionals. The consumer does not always know exactly what they are paying for.”

”Retail locations are very important to us; that is where you have the space to fully tell the story of your brand and give the consumer the complete experience,” Hartog-Holla adds. In September Denham the Jeanmaker produced a new brand movie entitled ‘The truth is in the details - Jason Denham unveils the truth about jean making’. “We wanted to communicate the feeling of the brand and our stores to a larger audience, which is why we chose to make a brand movie. A cinematic approach allowed us to delve deeper, to reveal more details in a visual way.” 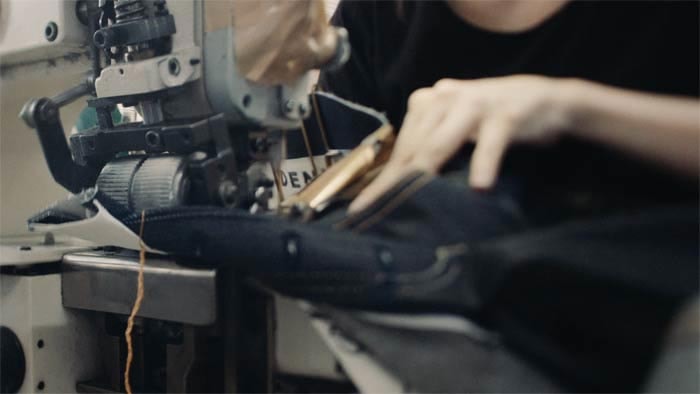 The production process was filmed in detail. “It’s about the jeans and how they are created. The quality of the brand is determined by how the materials are selected, how they are woven, and the number of washes; it is all these details in the production process which make the jeans what they are. Sometimes it can take up to 80 hours to make a single pair of jeans, which explains the high price. That is what we try to demonstrate in this movie, so that customers know why they’re paying a certain price for a pair of jeans.” The movie is shown from Jason Denham’s personal perspective. “He is the one who creates the jeans, the designs and the washes. It’s only logical to see the process through his eyes,” Hartog-Holla concludes. 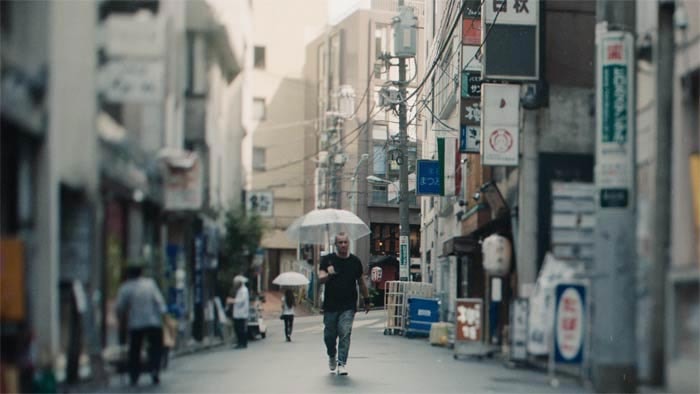 Denim marketing: G-Star focuses on the definition of ‘Raw’

”At G-Star Raw, we look at how to innovate denim, but also at the personal ties with the wearer, and how to combine the two,” G-Star Raw strategy director Sean Peron explains. At G-Star Raw, there are two important cornerstones which play a major role in denim marketing: innovation and imagination. “When you combine the two, it’s known as ‘Raw’; the uniqueness and purity of the brand. It’s a human phrase for what we do at G-Star on a daily basis.”

In order to explain ‘Raw’ to the consumer, G-Star launched a new campaign video in early September. The video mainly features people who work at G-Star, and how they think about creating innovative denim and what exactly ’raw’ is. However the campaign does not stop there. “We made fifteen short films, which reveal different aspects of the brand,” explains Peron. “Consumers can also contact our staff in various departments, from Finance to IT.” 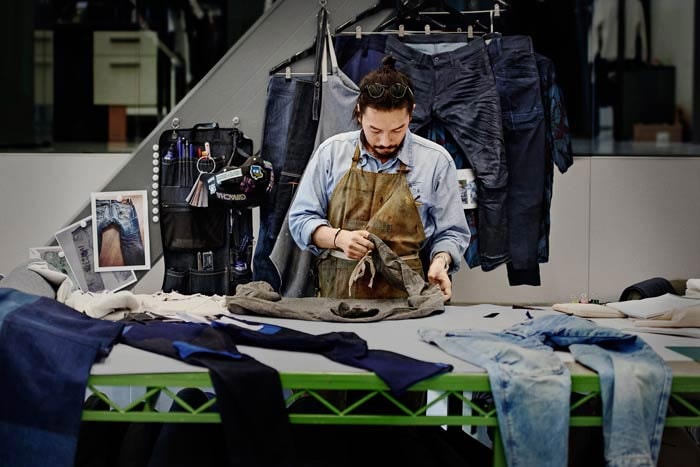 This approach is the brainchild of Pharrell Williams, who became co-owner of G-Star: Raw earlier this year. “Sometimes, we don’t know who it will appeal to, or if a marketing tool will be successful. When Pharrell joined us, he suggested ‘throwing the doors wide open’. That is literally what we have done in this video. For the first time, we are showing the world how we design, how we work, and share what drives us. It’s a unique way of storytelling in general marketing; to expose and clarify the way a company operates internally.” Peron admits that G-Star was nervous about it, but that Williams firmly believed this is what they had to do.

Since Pharrell’s arrival, much has changed within G-Star. “He injected the company and the marketing strategy with his innovative way of thinking. He has many ideas about all the departments and certainly about how to tell your story via marketing,” Peron continues. “Pharrell knows how to translate these ideas into a story that appeals to the customer. 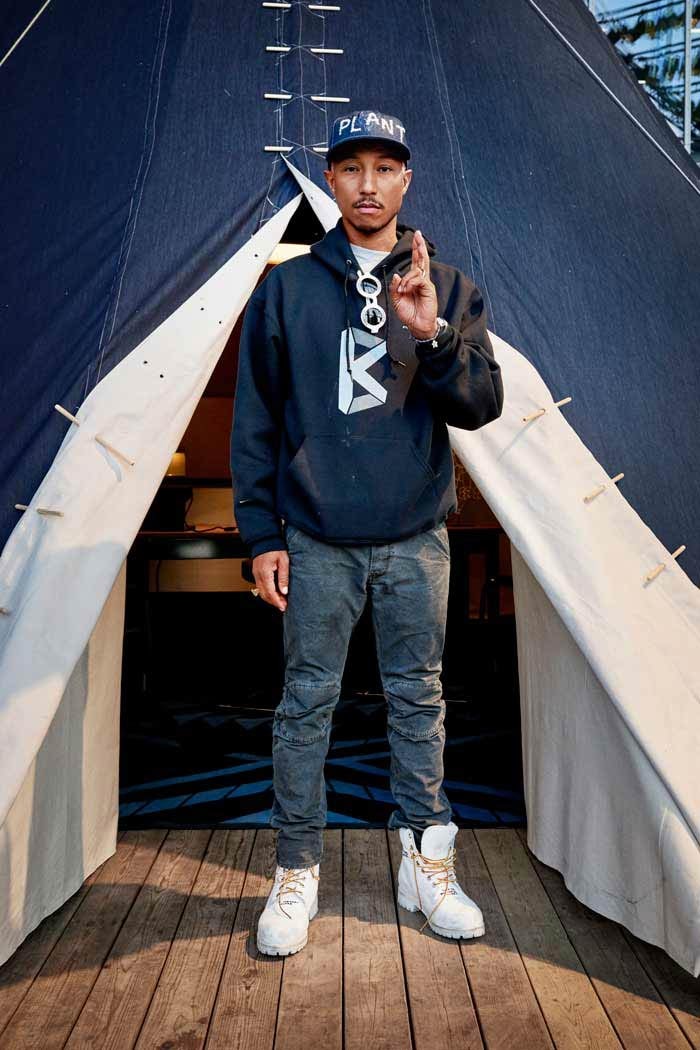 These days, there are many channels which brands can tap into to tell the story of denim. “In the beginning I used to drive across the entire country to tell the story. Now we do everything via mobile tools and via the stores,” Jaspers reflects. In the meantime, Scotch & Soda has built a marketing team consisting of 40 people, who also work on the marketing for 'Amsterdams Blauw.' “A marketing concept is developed based on the collection story. We don’t just post it on the website and sit back,” Jaspers continues. “Of course, there are constant new developments concerning social media channels such as Snapchat and Instagram Stories, but we try to stick to the 'Amsterdams Blauw' DNA as much as possible.” In the end, it’s not just about numbers, but the relationship with the customer.

”Social media is extremely relevant,” Denham the Jeanmaker’s Vivian Hartog-Holla confirms. “Marketing is becoming much broader, with all the channels being used. For us marketers, Facebook is useful for disclosing extra information, such as store openings or product promotions.” Denham also relies heavily on PR, she reveals. “We are increasingly focusing on our digital strategy, which explains the brand movies.” Fun fact: Jason Denham is personally responsible for his brand's Instagram account and spontaneously post updates while on business trips. 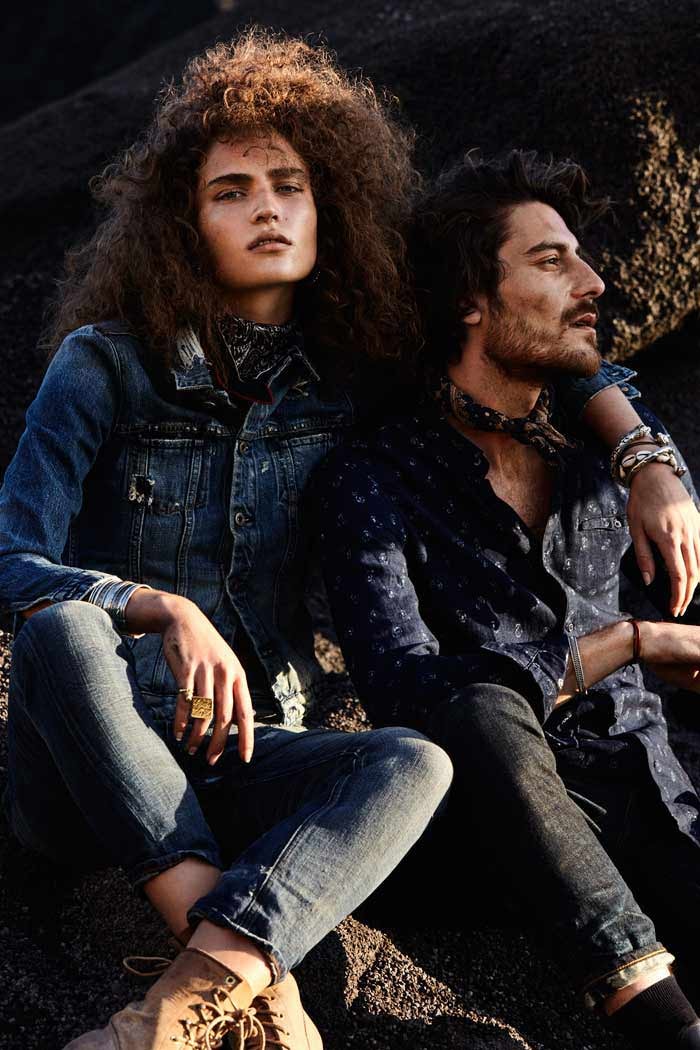 G-Star Raw’s marketing team, which is made up of about 75 people, includes so-called ‘marketing experts’. Peron: “They know all the channels and how to tell our story on them. The most recent campaign was on Youtube, but smaller films about such things as research projects have been posted on Instagram. When you go to the G-Star website, you can see a portrait of the entire ‘G-Star family’, as well as short films and background information. We try to find the right channel for the story or a part of the story.”

Are there do’s and don’ts in denim marketing? The blue lifestyle forms the backdrop for 'Amsterdams Blauw.' “You have to be able to keep telling inspiring stories,” says Jaspers. “People should be able to dream a little. We hope to surprise them and to inspire a love of denim.” 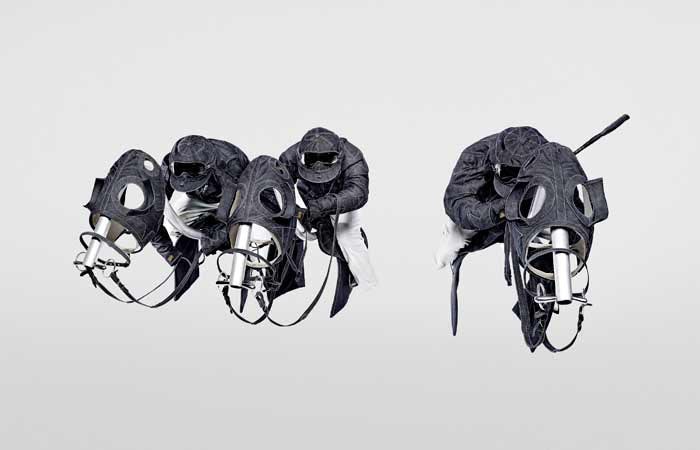 Peron believes there are a lot of unwritten rules at G-Star. “You have to have a feeling for what fits within the world of G-Star. During campaigns we bring experts from different departments together to see if something comes of it. For example, we’ll ask an architect to look at it from his perspective, which is so very different from ours. That is how we know whether a campaign ‘clicks’ on various levels. However, we generally work with the ‘forbidden combination’. That means; two elements that actually do not belong together, but can cause an interesting clash when combined. For example, when you combine a very technical product with a very human way of dressing, you achieve something quite interesting. It is this clash we look for in every campaign.”

Success is, of course, measured based on sales, but engagement is just as important. “Reaching an audience is vital, both existing and new customers,” says Peron. “However, the most important consideration is probably what we like, what works for us? Does it feel like G-Star and is it teaching us something?” 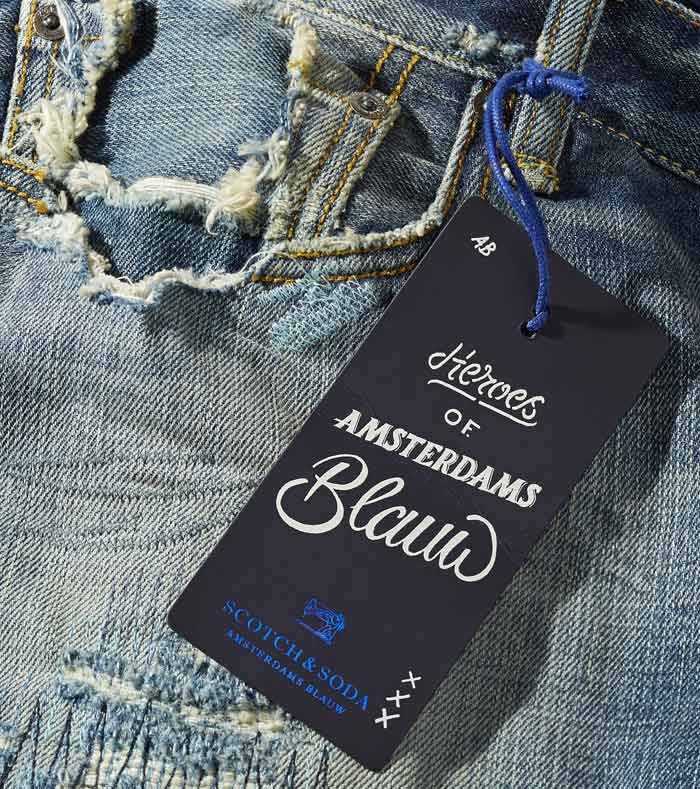 At Denham, intuition forms the basis. Holla-Hartog: “Our team has been there from the get-go, and we trust that feeling. It is impossible to measure whether someone who has seen our short film buys a pair of jeans two weeks later. Brand recognition does grow, of course, but how that translates into sales is harder to inventory. With e-commerce, it is easier, of course. We do look at conversions related a brand movie, but brand recognition is just as important.” With most films, the target also depends on the type of film. “A film about a product generates more sales than a corporate film.”

G-Star’s strategy director hopes that customer will ’start to think differently about fashion and denim’. “We want to inspire them, so that they will view denim differently when they go shopping.” Vivian Harto-Holla at Denham corroborates this. “Jeans is a market that requires engaging storytelling, even more so than other markets,” she states. “It’s very relevant to show how one pair of jeans differs from another. The way you do this is how you differentiate yourself as a brand.”