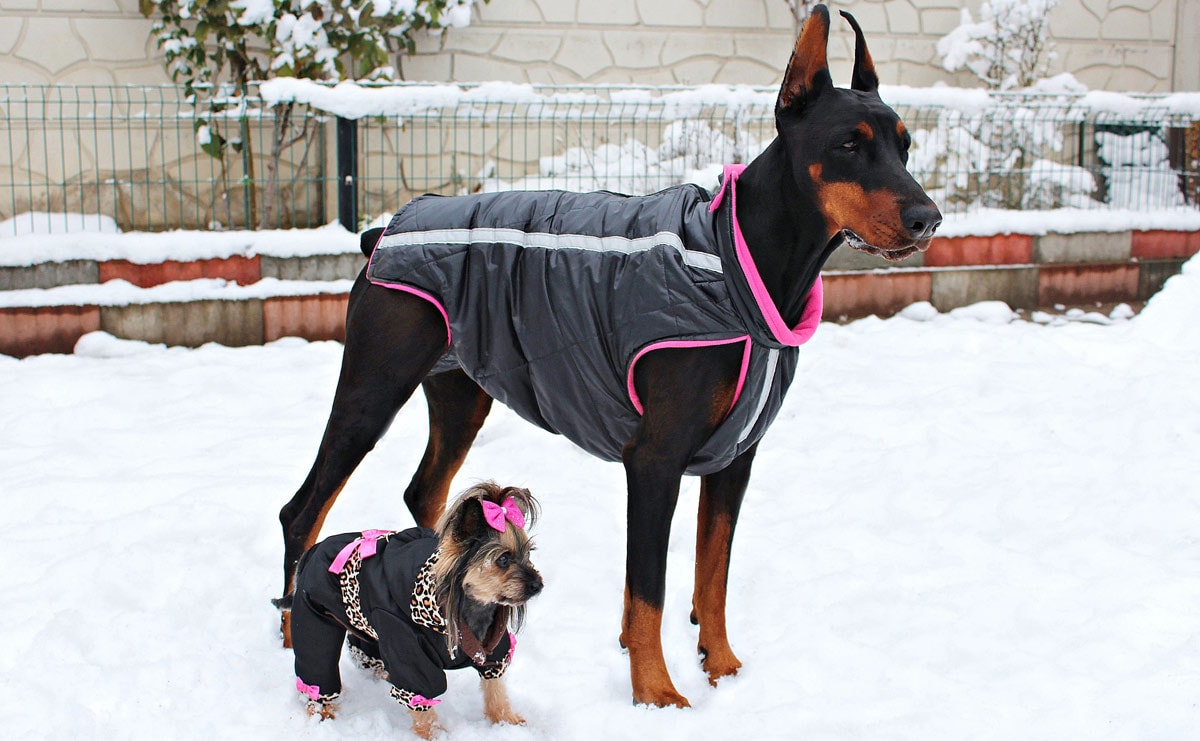 Like cats and dogs? Canine couture and feline fashion are very much en vogue

What do the designers Vivienne Westwood, Julien MacDonald, Jenny Packham, Christopher Raeburn, Philip Treacy and Matthew Williamson have in common? They all have designed one-of-a- kind statement pieces for dogs for a growing number of pet owners who want to make sure their pets are fashion forward and stylish. The selections of brands like American Apparel, Barbour, H&M, John Lewis, Moncler, Ralph Lauren and Target that regularly include items for four-legged friends prove that petwear and pet care is a growing market - currently valued at close to 80 billion US dollars in the United States and Western Europe alone.

In fact, it is so lucrative that labels like Barker, Dog A Porter, Max-Bone, Moshiqa, Poldo Dog Couture, Rororiri, Ruby Rufus, Vanderpump Pets, VIP and others even cater exclusively to canine and feline companions. Famous cat fans such as Karl Lagerfeld and his Choupette and Jason Wu and his darlings Jinxy and Peaches have shown how animals can occupy a central place in one’s life. But is it just a fad? Is it even cruel? Or is it helping animals? FashionUnited has put together an overview of different approaches to the petwear market. 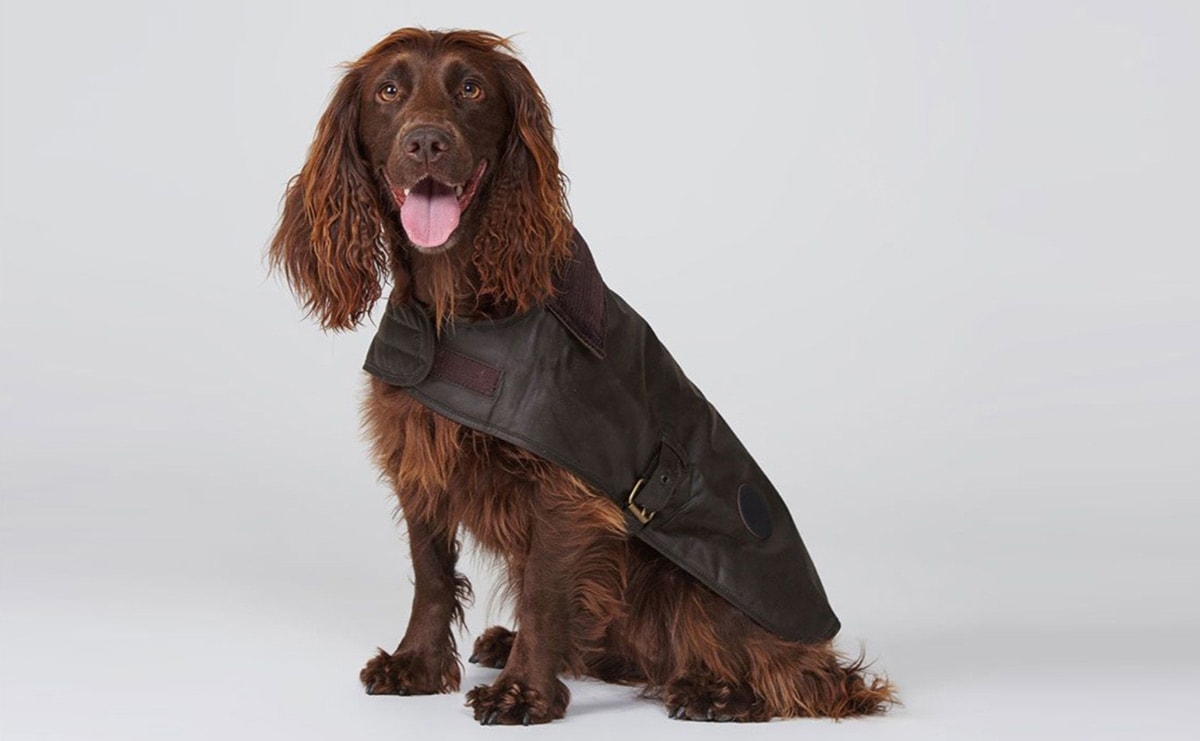 Dog couture is here to stay

In October last year, American artist and designer Heron Preston teamed up with New York-based Very Important Puppies (VIP) to launch a streetwear-inspired line of dog clothing and accessories. With jackets that match Preston’s own line and leashes that resemble his belts, the collection plays with the “mini me” trend that started with childrenswear. Since then, the designer and the dogwear brand have even teamed up with NASA for a VIP x NASA x Heron Preston capsule collection that features windbreakers, a hoodie and a crew neck t-shirt as well as a leash, collar and poop bag dispenser with the NASA logo. 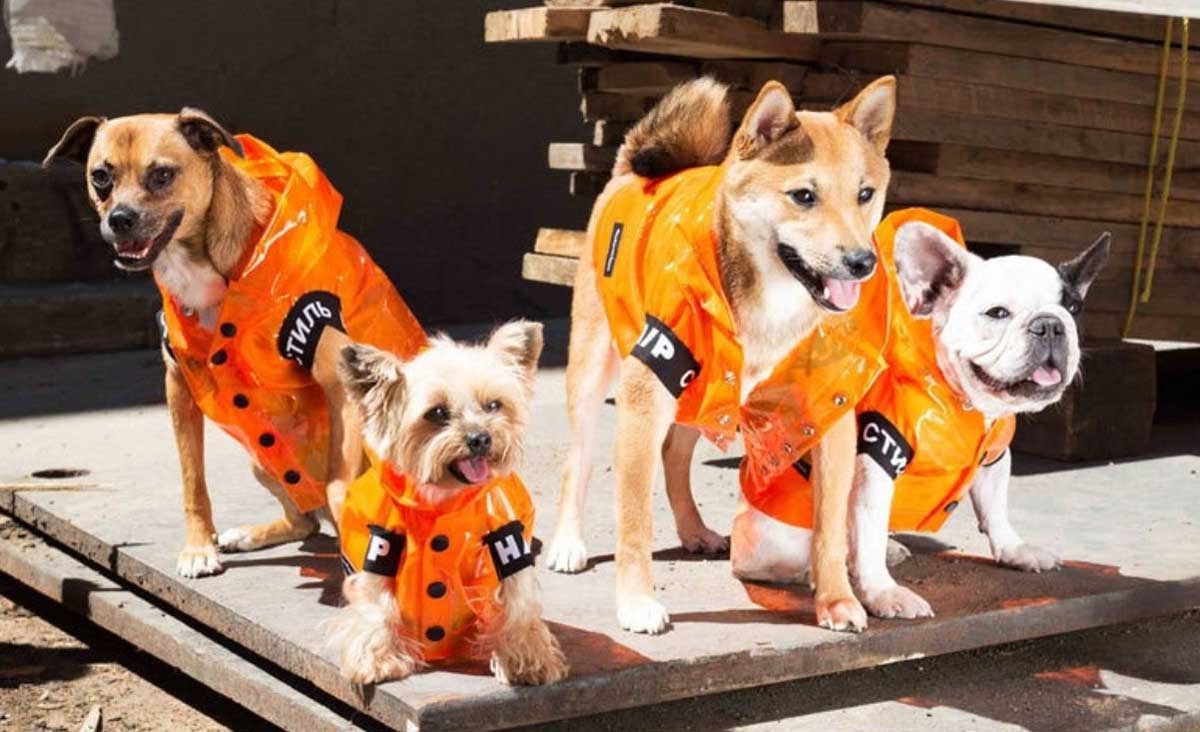 Let’s see what else is out there in terms of fashionable items for four-legged creatures: The offer ranges from the practical - dog raincoats and coats, protective vests, collars and travel harnesses - to the fashionable like knitted sweaters, zip hoodies, sweatshirts, polo shirts and t-shirts to the bizarre like dog costumes and even bathrobes. Not to forget designer items like cashmere t-shirts and merino wool sweaters, trench coats and accessories.

Especially the latter is on the rise with several brands catering exclusively to the high end petwear market. Hollywood luxury pet brand Moshiqa for example caters to the rich and famous, like Lady Gaga's dog Asia, John Legend’s dog Pippa and Paris Hilton’s eight dogs among others, whereas celebrities like Anna Wintour, Beyoncé and Ozzy Ozbourne prefer clothing their pooches in items by New York luxury and fashion lifestyle pet brand Max-Bone.

The animal rights organisation PETA stresses the practical aspect of any animal clothing: “As colder weather sets in around the country, some short-haired or small dogs may be more comfortable wearing a sweater, jacket and even boots to protect them from the icy temperatures. However, even with these, your companion’s comfort and well-being should come first. Do they fit properly, without restricting movement? Does your animal seem distressed to be wearing them?,” the organisation cautions. 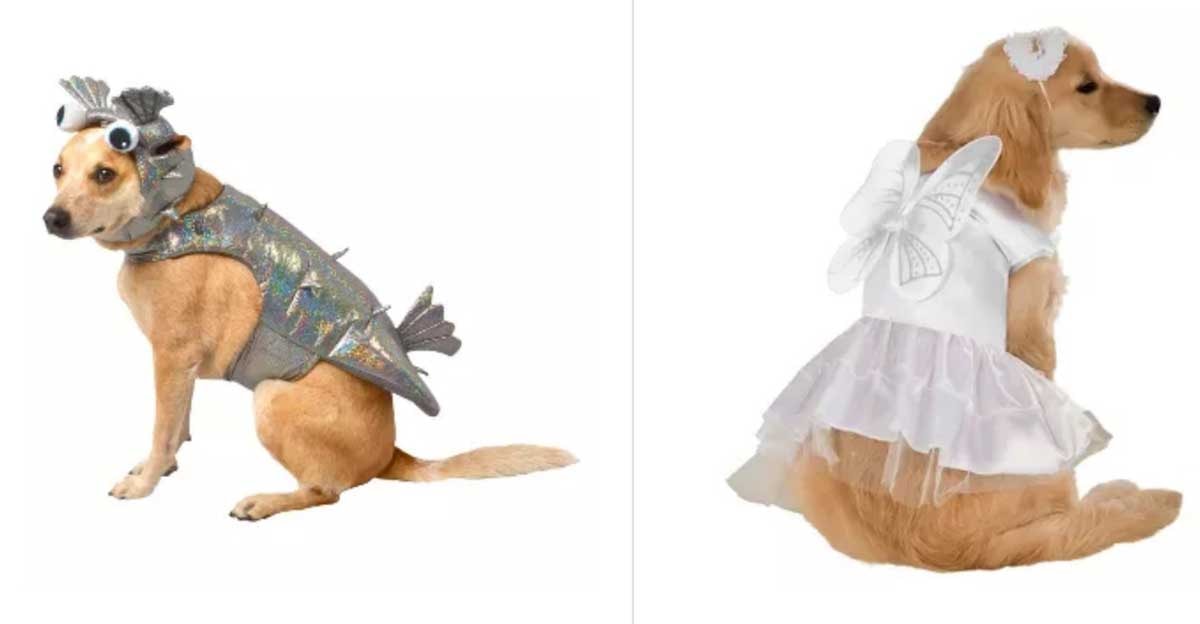 The German Humane Society even goes a step further and advises against clothing for animals: “Accessories that are purely for the pleasure of humans and restrict the freedom of movement of dogs … are not suitable for animals and should therefore be rejected on ethical grounds. Animals should not be humanized, and the well-being of the animal should always stand over a possible need for prestige of the owner,” said spokesman Marius Tünte already five years ago.

Be that as it may, the need to pamper and express oneself through one’s pooch or puss is nowhere as apparent as in the need to clothe them, more and more often even in matching outfits. Swedish fashion brand H&M and Italian luxury fashion house Moschino jumped on the bandwagon when they launched their clothing line for pets last autumn: 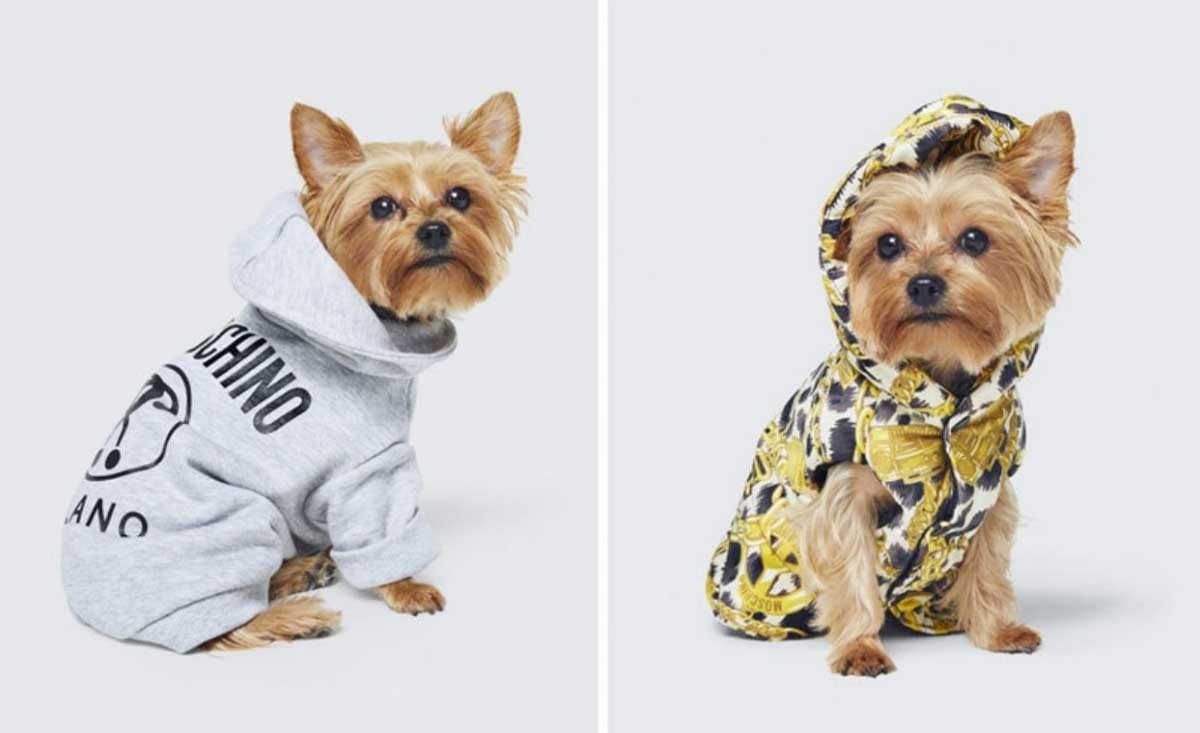 “At first, H&M asked if I would do a kids component for the collections, as I have both my own Jeremy Scott kids line as well as a Moschino one. I thought I’d rather do something I have never done before -- and I’ve been really wanting to put out a pet line,” said Moschino’s creative director, Jeremy Scott, in an interview with US Vogue.

H&M does offer a cheaper range of dog clothing as well: rain jackets, coats or pullovers for small dogs are available from 5.99 euros onward. And those who want to dress their pooch as a bee, Santa Claus or casually in a Hawaii shirt, will find something too. 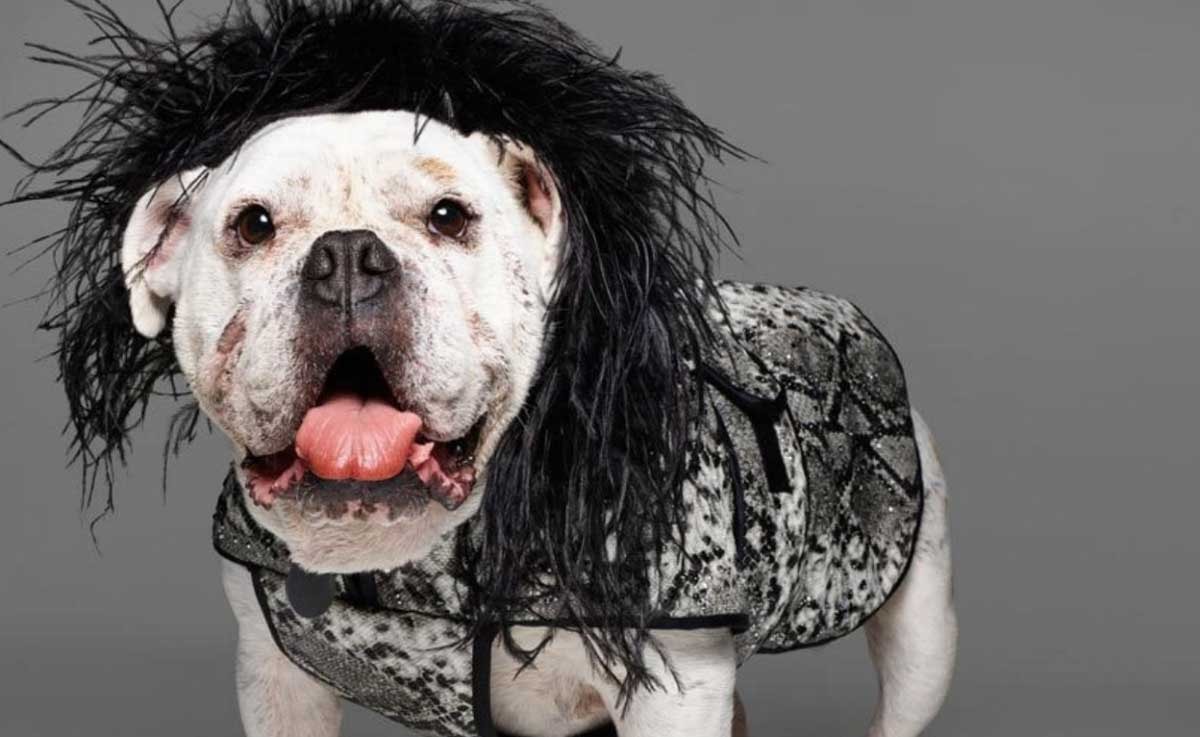 But getting back to the high end of the spectrum, the aforementioned designers plus Jeff Banks, Jasper Conran, Ben De Lisi, Lulu Guinness, Jeremy Hackett, Bruce Oldfield, Trevor Pickett, Richard Quinn, Zandra Rhodes and Swarovski all designed bespoke dog coats, collars and leashes for a good cause: The were auctioned at the Collars and Coats Gala Ball for the British animal shelter Battersea Dogs & Cats Home on 1st November 2018 to raise raise vital funds for the charity.

“This really is the most wonderful and unique fashion fundraiser and we’re incredibly excited and honoured to have so many world-renowned designers supporting Battersea and creating a fabulous array of covetable dog coats, collars, and leads to be auctioned off for our charity,” said Battersea’s CEO Claire Horton. “It costs more than 21 million pounds annually to ensure Battersea can keep helping dogs and cats in need and, with no government funding, our Collars and Coats Gala Ball is all about increasing awareness of the important work the charity does 365 days per year to offer a second chance in life to thousands of animals.” 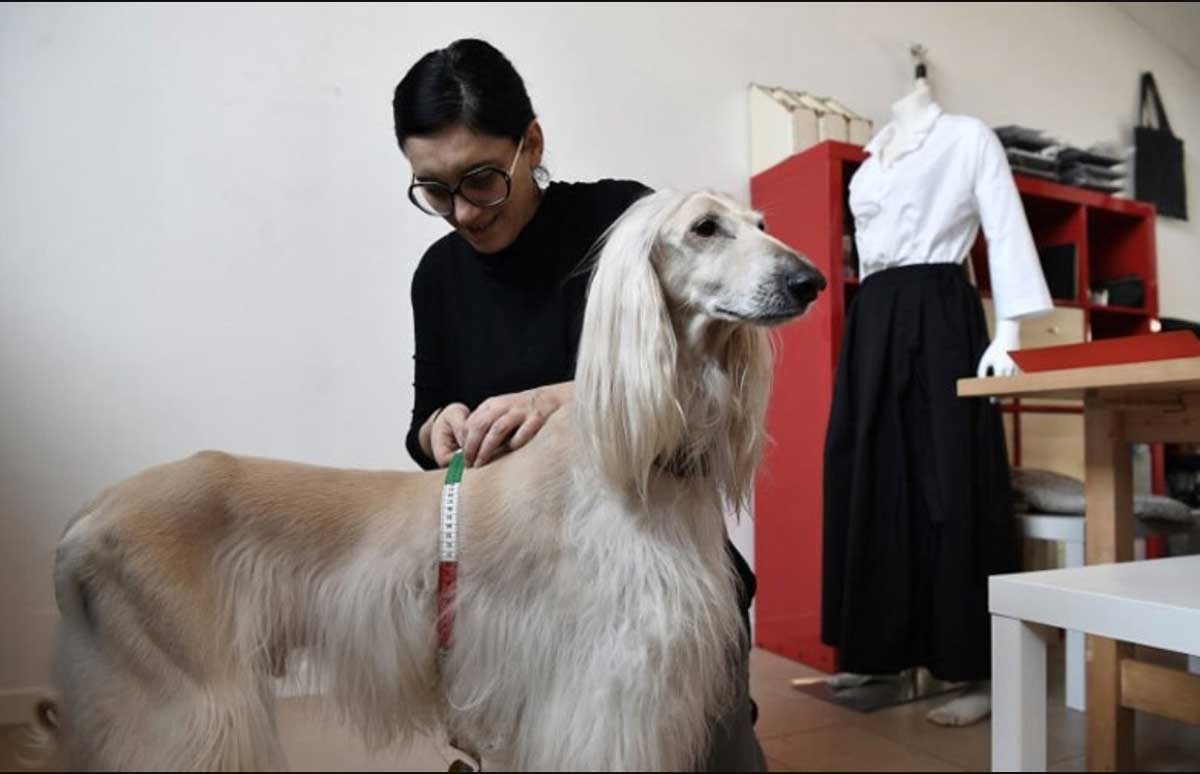 The love for animals and the need to help them was also the driving force behind Giovanna Temellini’s decision to offer bespoke canine couture. Her Milan-based label Dog A Porter makes a made-to-measure fashion line just for dogs, keeping them and their sensitive ears for example protected in tailormade wear that is also stylish and one of a kind. Temellini has worked in the fashion industry for more than 25 years with brands such as Bottega Veneta and Armani before the active supporter of animal welfare groups decided to use her knowledge and expertise for four-legged customers. >

Being an animal activist or the owner of a pet is usually how designers and brands get into the petwear market: They want to make sure their four-legged friend is well protected, fashionably clothed or both. "Since adding Peggy to my family, my design tastes and needs have extended beyond my own wardrobe and I have a whole new member of the family who needs her own accessories,” said British fashion designer Henry Holland of House of Holland about his collaboration with pet fashion e-tailer PetsPyjamas, which resulted in one of the first canine collections. 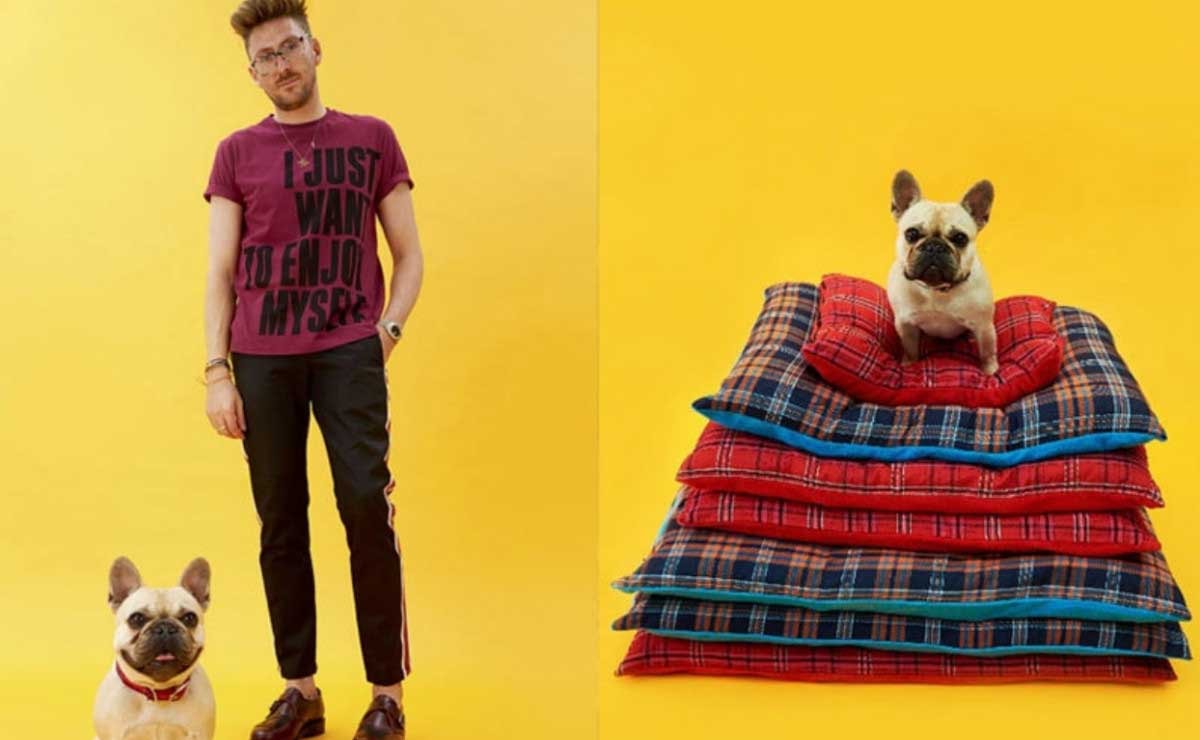 Regardless of one’s personal opinion, brands and retailers are well advised to take note of the growing petwear market: According to German online portal Statista, in the United States, there are already more pet-owning households than there are those with children: 84.6 million with pets compared to 52.8 million with kids. In Europe, it is pretty much the same story with 80 million households owning at least one pet animals, up by 10 million households or 14 percent in 2010, with Germany and the UK leading (9.4 and 9 million pets, respectively), followed by Poland (7.6 million pets), Italy (7 million pets), France (6.95 million pets) and Spain (6.2 million pets).