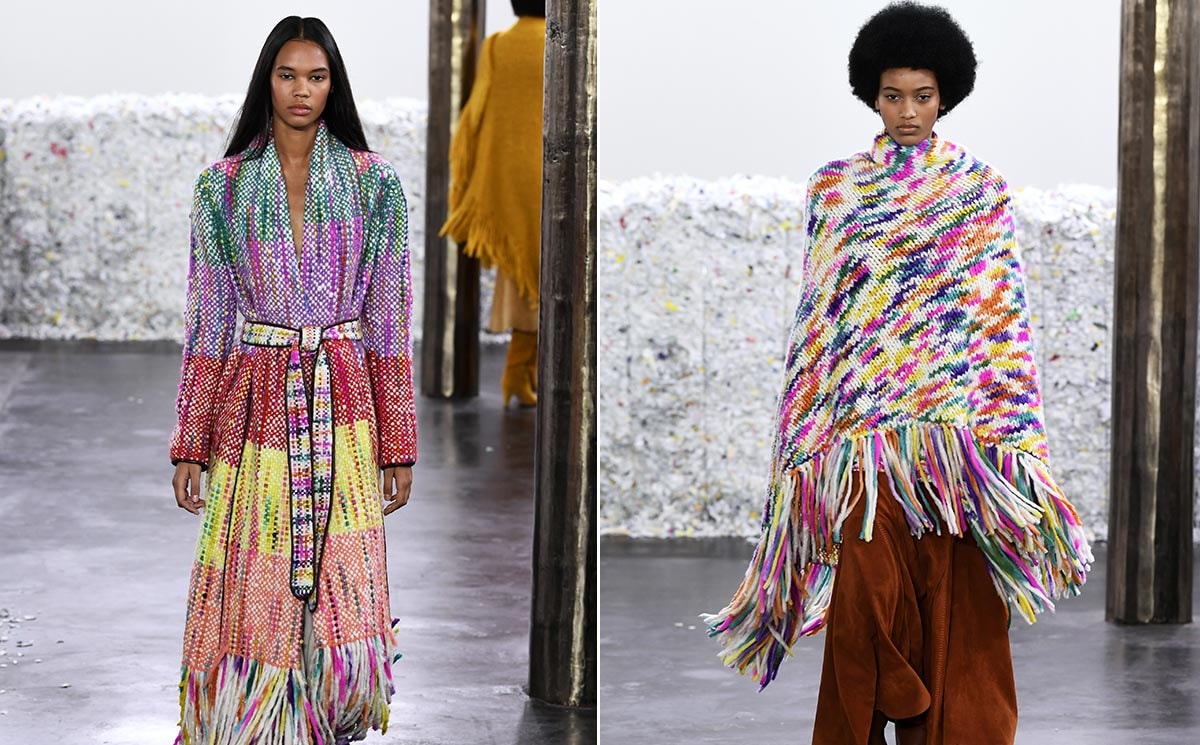 NYFW AW20/21: highlights from the week

Gabriela Hearst cemented her reputation as the flag-bearer of high-end responsible fashion with a stunning fall-winter collection that focused on sustainability at New York Fashion week Tuesday.

Hearst's designs were all made from natural fibers, including recycled cashmere and remnants of antique Turkish rugs that were pieced together to form long coats.

Many of the sweaters, cardigans, shawls and dresses had been handknitted by Manos del Uruguay, a non-profit cooperative of female artisans from Hearst's home country.

The collection had a distinctly 1970s vibe with hand-painted leather coats and designs chosen from mandalas or abstract shapes associated with dreams.

Any carbon footprint from the show will be offset via a donation to a project that aims to save the Cardamom forest in Cambodia.

"True luxury is knowing where everything comes from and how it is made," said Hearst, who grew up on a sheep farm in Uruguay.

Tennis star Maria Sharapova served up a celebrity appearance in all black at Vera Wang's show held in a plush Upper East Side mansion just off Central Park Tuesday.

Models glanced at themselves in the grand residence's elaborate mirrors as they walked through the house's various rooms wearing black silk chiffon paired with thick platform heels.

"I wanted to bring a kind of importance but a lack of formality, a kind of ease, youth, charm and delicacy to the evening," Wang told AFP.

Rocker Debbie Harry rolled back the years as Coach 1941 paid tribute to New York's past, present and future Tuesday.

The Blondie lead singer, 74, performed alongside Atlanta band The Coathangers as they added a 1970s touch to a collection that celebrated "New York's unique creative energy."

More than six years after taking over as creative director, British designer Stuart Vevers continues to evolve Coach, which will notch its 80th anniversary next year.

After shifting to a more urban collection last season, Vevers accelerated that movement with a distinctly vintage streetwear look this time around.

The flat sneakers, large socks and hipster hats were straight from the streets of Brooklyn while several designs were inspired by the paintings of local artist Jean-Michel Basquiat.

"New York was the ultimate muse for this collection," Vevers told AFP.

If jury selection had gone differently then US model Gigi Hadid would have been in court for Harvey Weinstein's rape trial instead of walking the runway for Proenza Schouler Monday.

Hadid, 24, was last month excused from serving as one of the jurors in the high-profile case owing to her fame after appearing for the first round of pre-screening.

On Monday, she lined up for Proenza Schouler's 2020 fall-winter collection, which, after a spring show that evoked the 1980s, approached the present and near future head-on.

The New York duo of Lazaro Hernandez and Jack McCollough showcased a series of large, thick coats complemented by big shawls, designed to provide protection in an "unpredictable decade."

"For us it's always a mood, an attitude. We just take it from the world around us," Hernandez told AFP, following the late Monday show.

"Things are falling off, falling apart, unraveling but then held together.

It's just like how people feel right now," he added.