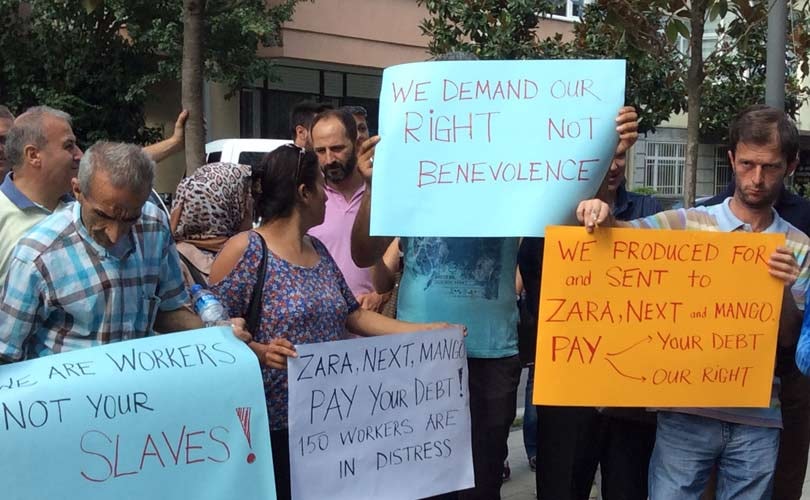 Zara, Next and Mango urged to Pay Workers Wages in Turkish Factory

Fashion giants Zara, Next and Mango are being called on to step forward and take responsibility for the pay of Turkish factory workers. Former garment workers of Bravo Tekstil factory complex in Istanbul, Turkey are campaigning for their lost wages and severance pay after working for three months with no payment following the sudden closure of the factory in July 2016. Now, more than a year later, workers have yet to receive payment owned and are calling upon the fashion brands the factory produced apparel for - Zara, Next and Mango - to help support their cause by taking responsibility for their payment.

Over the past year, the factory workers have worked together with trade unions, as well as the Clean Clothes Campaign, to solve their case. Legally, 140 workers are owed three months wages and severance payments after pursuing their case in Turkish court. However, after failing to negotiate with Inditex, Mango or Next, the workers have joined forces and launched an online petition, calling on conscious consumers to support their campaign for reimbursement for three months of unpaid work.

Factory workers calling on Zara, Next and Mango to pay three months wages

“We demand what is rightfully ours. We only demand the compensation for our labour. Nothing else, nothing more,” said Yeliz Kutluer, a new mother and former Bravo Tekstil factory worker in a statement. The workers demanding payment for their work has been making apparel for the three brands mentions, with 75 percent of the factory’s overall production was for Inditex’s leading brand, Zara. The total amount the workers are asking for is 2,739,281.30 Turkish Lira (about 650,000 euros), less than 0.01 percent of net sales for Inditex’s first quarter of 2017.

However, after previously contacting Inditex’s head offices in Istanbul and in Spain, Inditex has reportedly refused to take full responsibility for the financial compensation of the factory workers which produced its garments, despite making record profits for the first quarter of 2017. This refusal is said to be an open violation of the Global Framework Agreement with IndustriALL Global Union which Inditex signed to protect the rights of its workers in its supply chain. In addition, Next and Mango are also said to have refused to take full responsibility for the 140 Bravo Tekstil workers missing three months pay.

“Brands are principal employers. They have proven time and again that they control every aspect of their orders to their suppliers. Therefore, it is clear that it is in their power to make sure that all workers who produce their apparel receive their monthly wages and are working in safe conditions, and morally they must do so,” argued Bego Demir from Clean Clothes Campaign Turkey. After more than a year of negotiations, Zara, Next and Mango have been unable to come to a settlement regarding the workers' compensation. The companies offer would only cover approximately a fourth of the amount the workers are asking for.

But the workers involved stress that it would unacceptable to agree on less. “One worker would get his money and the other wouldn’t. We all have families and children,” said Azem Atmaca, a former Bravo machinery operator in a statement. Sudden or unexpected factory closures are not uncommon in the garment industry, due to fierce competition and capital flexibility. Previous incidents in Indonesia, Cambodia and South America involving international brands such as Nike, H&M and Walmart highlight that companies can and should take responsibility for all their workers.

“My father worked so hard. I know well how he worked non-stop, day and night. So I want him to have what he is rightfully owed… (Zara, Next, and Mango) should hear our voice. That’s all I want,” said the daughter of Hikmet, a former Bravo Tekstil worker, who has been unable to return to university following the loss of her father’s job.

FashionUnited has reached out to Inditex, Mango and Next for additional commentary.