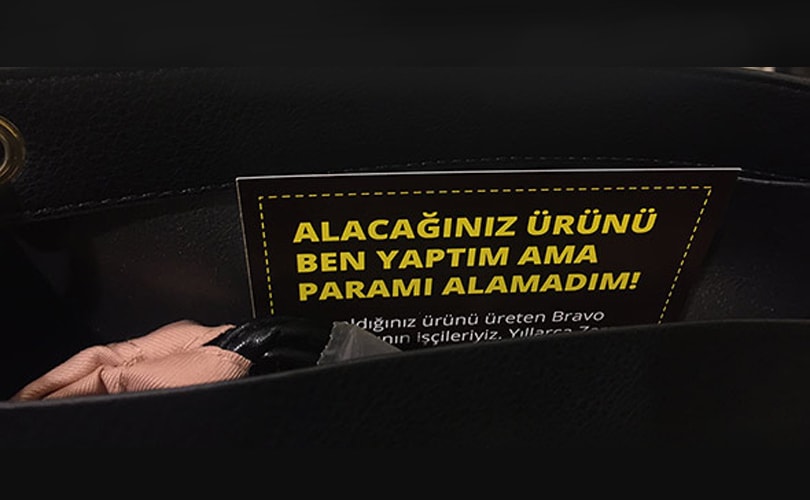 Will Inditex, Next and Mango finally take responsibility for their unpaid workers?

London - The public may have been shocked this weekend when news broke that notes had been left in Zara clothes by unpaid garment workers, who made apparel for the fast-fashion giant but did not receive payment. However, the unfortunate truth remains - these types of practices happen more often than one would like to think in the fashion industry.

Shoppers in Istanbul, Turkey, found a series of handmade labels from third-party tucked into various garments this weekend which read: "I made the product you are about to buy, but I haven't received any payment for it!"

The truth behind Zara workers plea for help notes

The idea to leave notes in Zara clothing was thought up by the Clean Clothes Campaign Turkey, who are working together with former factory workers of Bravo Tekstil, a manufacturing complex in Istanbul, to raise awareness for their rights to their wages. The workers have been campaigning for more than a year for 3 months wages, severance pay and unpaid holiday after the factory, which produced apparel for Zara (owned by Inditex), Next and Mango, suddenly shut down in July, 2016.

Tell #Zara , #Next , and #Mango: Pay Your Workers the Wages They Earned! #JusticeForBravoWorkers #BravoİşçileriİçinAdalet pic.twitter.com/usMxCvtU5o

After failing to receive any payment from the brands, the ex-Bravo workers went to numerous Zara stores in Istanbul and placed their own labels on Zara products in order to ensure their voices were heard. "We are the Bravo factory workers who made this product you are about to buy. For years we produced clothing for Zara," continues the note. "Then our factory suddenly closed, without paying us our last 3 months of wages and severance payment. Please tell Zara to pay us our money!"

While shoppers shared their outrage at message left in the clothing via social media channels online, it is heartbreaking that former factory workers have had to employ such tactics to get a response from the responsible brands. After the factory was shut, workers came together to form a union, launching an online petition calling on the retailers from whom they had been producing apparel for to step up and take responsibility for all their workers. However, after more than a year, neither Zara, or Mango or Next have made a suitable offer to compensate the payment owed to the 140 workers employed by Bravo.

"The bravery of the workers should be applauded"

"Mango, Next and Inditex previously made an offer to the workers, but it was not sufficient to cover all the workers demands, which include three months wages, severance pay and unpaid holidays," said Dominique Muller, Policy Director at Labour Behind the Label, the UK branch of Clean Clothes Campaign to FashionUnited. Since the workers declined their first offer, Mango, Next and Inditex have all refused to come together and re-negotiate their initial compensation offer. "None of the brands have been very active at sitting down and talking about since then, so things have come to a point when workers felt that they had to go public," added Muller.

Clothing companies are responsible for all aspects of the production of their goods, but can decide to change suppliers and pull out of a factory at any given time, which can lead to the sudden closure of a manufacturing centre. As 75 percent of the Bravo factory's overall production was for Zara, the workers chose to focus on raising awareness concerning Zara's involvement. Currently worth approximately 8.6 billion pounds, it is difficult to understand why one of the industry's most successful fast fashion brands refuses to take responsibility for all its workers.

Gross. Workers deserve to be paid for their labor which made him richest man in the world! #JusticeForBravoWorkers! https://t.co/zEWLxj21pE

Although concerned shoppers took to social media to voice their concern over the messages found in Zara garments in late October, Inditex did not issue an official statement concerning the situation until November 3, after meeting with the local IndustriALL branch. A spokesperson for Inditex shared the following statement with FashionUnited: "Inditex has met all of its contractual obligations to Bravo Tekstil and is currently working on a proposal with the local IndustriALL affiliate, Mango and Next to establish a hardship fund for the workers affected by the fraudulent disappearance of the Bravo factory’s owner."

"This hardship fund would cover unpaid wages, notice indemnity, unused vacation, and severance payments of workers that were employed at the time of the sudden shutdown of their factory in July 2016. We are committed to finding a swift solution for all of those impacted." The spokesperson added that Inditex was doing everything in its power to rectify the situation and that Inditex complied with all legal responsibility it had in the matter.

Next responded to FashionUnited's request for a comment on its involvement in the case and a spokesperson for the British fashion retailer shared the following statement: “Next is currently working with Inditex, Mango and the local IndustriALL affiliate on a proposal to establish a hardship fund for the workers affected by the fraudulent disappearance of the Bravo factory’s owner. Although an offer of funding was declined a while ago, Next remains committed to supporting a solution for the workers involved."

Although the notes have had the desired effect, it remains to be seen if and when the workers will finally receive their much owed-payments. "We support the workers and hope public support will encourage brands to come back and sit and talk about making a deal with the workers," added Mueller. However, Muller adds that she has yet to hear anything personally from the brands since reports first began emerging last weekend, which is a reflection of the difficultly brands retain when it comes to taking full responsibility for their own supply chain.

"Workers are at the benevolence of the brands in this case, which makes it a difficult situation."