Burberry's Fox: 'When I grow up, I'm going to be a fur collar'

Luxury fashion label Burberry is being called upon to end its use of real fur in its collections in a personalized campaign launched by international animal welfare organization Four Paws. Entitled #SaveKimi, the campaign was created by Four Paws to increase public awareness of the harsh reality endured by

animals raised and slaughtered on farms to provide fur for the fashion industry. The campaign is based around the fate of a fox cub currently living on a fur farm in Finland operated by Saga Furs, Burberry's main supplier, who is set to be killed during the “fur harvest” at the end of the month.

“If the British public knew the horror of what goes on behind the scenes on Finnish fur farms that provide fur to companies like Burberry, they would be shocked,” said Four Paws UK Country Manager, Julie Sanders. “Our campaign to save Kimi aims to show them this by focusing on the experiences of just one specific fox, Kimi, who is being farmed on one of these Finnish farms for his fur.”

An online petition and open letter have been sent to Burberry asking them to save the fox Kimi and his peers from their fate and stop using real fur in their collections, which has gained over 144,000 digital signatures so far as well as 40,000 hand written signatures. Four Paws also created a Facebook page and Instagram account for Kimi, where the fox cub shares his 'thoughts' on his life, the fur industry and the fate of other animals living on the farm. 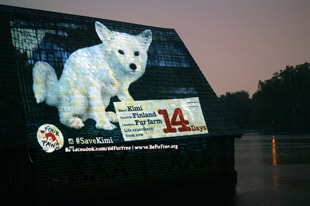 “Kimi is the beating heart of our campaign. He represents the 100 million animals killed for fashion every year around the world,” explains Thomas Pietsch from Four Paws. “The little fox lets us put a face to the living being behind the fur collar.” A recent Facebook update on Kimi's page features a video of the foxes caged neighbors devouring the corpse of a deceased fox, highlighting the ongoing cruelty found on fur farms.

Four Paws previously tried to initiate contact with Burberry and its newly appointed Chief Executive Officer Christopher Bailey, at the start of the campaign to discuss the animal abuse and cruelty taking place on Finnish fur farms and asked to have a conservation with their managing director.

Adam Rahmen, Head of Communications for Four Paws UK, told FashionUnited the animal welfare organization tries to work with the industry, rather than against it, in searching for solutions for alternatives to real fur. The organization is committed to giving fashion labels such as Burberry the opportunity to have an open dialogue. However Burberry has refused to commit to an open dialogue with Four Paws or meet them for an official handover of the signatures.

Instead, Burberry has responded to the campaign with a letter which underlines its ongoing efforts to ensure its sourcing of animals hides conforms to its ethical standards, adding that “animal welfare is a key consideration when sourcing animal-derived materials, including fur.” “We work closely with our suppliers, including Saga Furs, to improve animal welfare standards beyond legal compliance and to adopt third-party monitoring systems,” wrote the luxury label.

A spokesman for Burberry added that “fur accounts for less than 1 percent of our product offering.” "We source natural hides very carefully from suppliers that are governed by high animal welfare standards, in line with our ethical trading policy and to ensure the correct levels of traceability are being met.” 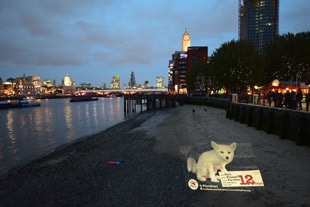 Despite Burberry's refusal to work together, Four Paws is set to continue its campaign. “Burberry claims in its CSR policy to be committed to high animal welfare standards, but by continuing to use real fur in its fashion collections it makes a mockery of this claim,” points out Sanders. “Furthermore, the footage we have acquired clearly shows the horrendous conditions these animal actually live in on the very farms from which Burberry source their fur.”

“We have already gathered over 150,000 signatures for our petition against Burberry use of real fur, so the fact they are not willing to enter into a dialogue with us about this is disappointing and shows a distinct lack of concern for the views of the public. We will continue to keep the pressure on Burberry to do the right thing and end their involvement in this cruel and outdated industry.”

Four Paws is set to host a peaceful protest this Friday in Covent Garden, where supporters from the campaign will come together to deliver the petitions in person to Burberry. Sinces its launch earlier this month, the campaign has gathered support from people across the globe, who have been spreading the message via social media network sites, as well as other animal welfare groups, such as Peta.

“We hope that the campaign to save Kimi helps consumers to think about whose skin they're really in,” said Mimi Bekhechi, UK Director to FashionUnited. “Whether it's a frightened fox's fur, the angora wool from a gentle rabbit or a calf's skin, it's not "fabric," and it's not ours for the taking...with all the designers and retailers now using impressive vegan fabrics that are not only stylish and warm but also animal- and eco-friendly, it's easy for fashionistas to get those must-have pieces minus the cruelty.”