INTERVIEW_ The best place to eat in Milan during fashion week is not in one of the city's multi-starred restaurants. It's in the courtyard of a shop where the stubble-cheeked son of a farmer has rigged up some maxi-sized barbecues and deep-fat fryers to entertain a few hundred hungry friends and contacts.

Welcome to the agreeable world of Brunello Cucinelli,  the one-time hippy who spent 36 years transforming himself from engineering dropout into Italy's king of cashmere and champion of capitalism with a human face. 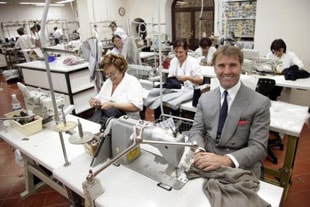 "Try the fagioli," advises the grill chef, gesturing to a sage-infused pot of white beans as he hooks a huge hunk of prized Chianina steak off the embers. Delicious indeed: as are the fried zucchini flowers, the corpulent "salsicce norcine" (sausages from Norcia, Italy's pork capital) and the free flowing "Il Bruciato" from Bolgheri, Tuscany's hottest micro wine zone.

Food counts for Cucinelli. At Solomeo, the medieval hamlet in Umbria that is the headquarters of his 1.2 billion euro (1.5 billion dollar) empire, workers take a 90 minute lunch break: enough to eat properly and take the nap that is part of their boss's daily ritual, wherever he is in the world. To Cucinelli lunch is the extra virgin oil that keeps the wheels of his business running, and the stock market loves him for it.

"Coming from the countryside we have this food culture that is a little bit special," Cucinelli told AFP. "By that I mean that it is so, so important to eat a peach that has been picked an hour before, a tomato that has just been harvested, a good oil...The most important thing is the quality of the raw ingredients. And so it is in business. We have the values of a restaurant and we, in our own way, are trying to cook in a very careful and precise way. We are trying to make a product that is, certainly a little exclusive, and clearly very expensive, but also of the highest quality and craftsmanship." 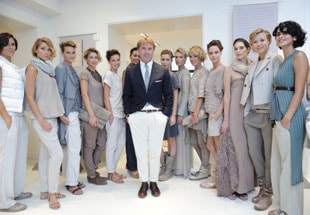 Cucinelli can afford to be a generous host. On paper he is a billionaire. At least he was until earlier this year when, aged 60, he transferred his 61 percent stake in his eponymous company to a trust fund that will look after his daughters, Camilla and Carolina, and ensure that his philanthropic work continues after his death. It is a remarkable state of affairs for the son of a tenant farmer who founded his business in 1978 armed with 500 dollars and one good idea. Having seen Benetton's success with brightly-coloured wool sweaters, the young philosopher-entrepreneur guessed correctly there would be a market for something similar in cashmere.

It was to prove a life-transforming flash of genius. "From 15 to 24, in truth, I lived the good life," he recalled. "I spent my time in cafes. I didn't study much, there were the cultural revolutions of 1968 -- the bar life in Italy was a bit like the Cafe de Flore in Paris: discussions, debates, philosophy. We talked about religion, politics, the rights of women. "It was my university of life. Yes, I was a hippy, absolutely a hippy."

Thirty-six years of decidedly unhippyish hard work later and Brunello Cucinelli SpA is a billion-euro business specialising in what the industry jargon terms "the absolute luxury sector" (ie. sweaters starting at 1,000 dollars). Cucinelli's workers are paid substantially more than average in a sector where exploitation thrives from first to third world. The boss has built them a library and a company canteen that could pass for an idyllic country restaurant. Solomeo has its own theatre; local roads and squares have been restored, buildings renovated. Even the football stadium where he still plays with boyhood friends was Cucinelli's work.

It all reflects a belief, inspired by the Greek philosophers, that wealth, if used productively to transform places and lives, need not be spiritually redundant. It is a philosophy, he says, that has its roots in seeing his father ground down by the drudgery and daily humiliations of the factory work he was forced to turn to when Cucinelli junior was a teenager."To sum it all up, the objective of my life has been to give work a moral and economic dignity."We can produce special products but to do so we need to have human beings working in special conditions."

Cucinelli did not become a darling of the Milan stock exchange without having an unerring eye for the bottom line. Shares in the company doubled in the year after a successful 2012 IPO and it has since sailed on steadily in the teeth of gusting economic crosswinds. Sales in the first six months of 2014 rose 11.6 percent (to 175.8 million euros), net profit by 18.6 percent (to 15.6 million).

An expanded company-owned retail network is helping to drive profitability. The group has just opened a first shop in Brazil and, revealed Cucinelli, India is next on the horizon with an opening scheduled for early 2015. But Italy's cashmere king can't see himself, like his compatriot Giorgio Armani, running the business at the age of 80. India will be export market number 63 and Cucinelli expects the total to top 70 before he calls it a day. (Angus Mackinnon, AFP)