COLUMN - The return of Surrealism and Expressionism: last wake-up call?

A clear tendency towards a renaissance of surrealism and expressionism in fashion and art, is already observable for quite some time. Also the spring/summer 2014 collections fit into the recurrence of these art movements. What could be the reason

for the striking comeback of surrealism and expressionism in our society? We should take a look back at the time, when these two movements made their first appearances.

originated in Germany at the beginning of the 20th century, shortly before the First World War. The time was marked by an acceleration of crisis, mass production, uncertainty. The expressionists wanted to illustrate an emotional experience, their inner state. They represented the world strongly distorted, in order to evoke moods or ideas. The desire for a better world, a new humanity, isolation, fear and death where central topics.

Surrealism was a primarily European movement that began in the early 1920s, just in between the two World Wars. A market crash in 1929, world economic crisis, poverty, unemployment and again uncertainty where significant for the period. The surrealist movement was a reaction against the destruction and pain induced by “rationalism” that had guided Europe and ended up in the horrors of Word War I. Surrealism reunites conscious and unconscious parts of experiences to create a “surreality”. We could even say it is some kind of escapism.

These two movements have an undeniably common ground: uncertain times, fear, inhumanity. They where forerunners for appalling and unforgivable periods of our past.

So if we compare it to nowadays, we can identify some quite striking similarities: since 9/11, the world is out of joint, people are worried and alarmed. Insecure and doubtful times started out from that incident. From then on, the world has known an acceleration of crisis and wars, ending up in a world economic crisis in 2008. Unemployment, poverty, uncertainty and discontentment are characteristics of our times, causing even more wars, riots and brutality.

And as fashion wouldn’t be fashion if it wouldn’t assimilate to the spirit of its time, we can find the influence of surrealism and expressionism both in fashion and art. An interplay of both movements. “Express yourself and reveal your blooming inner life” seems to be the guiding ideas of fashion at the moment. Phoebe Philo embellished her designs for Céline with gestural paintings; Riccardo Tisci sent the models down the runway for Givenchy with sparkling masks. You don’t even have to see the face, the clothes reveal everything you need to know.

Concerning surrealism I can’t help but think of Miuccia Prada and her designs, strongly inspired by Elsa Schiaparelli, who often worked with surrealist artist such as Salvador Dalí and Jean Cocteau. Raf Simons already sensed that tendency last year. A visible surrealistic influence not only in his Prêt-à-porter collections for Dior, but also in the labels campaign for spring/summer 2013. And let’s not forget René Magritte’s mustache that seems to be spreading over every conceivable garment since last year. The designer list is endless but these artistic tendencies are not only palpable in the fashion industry. 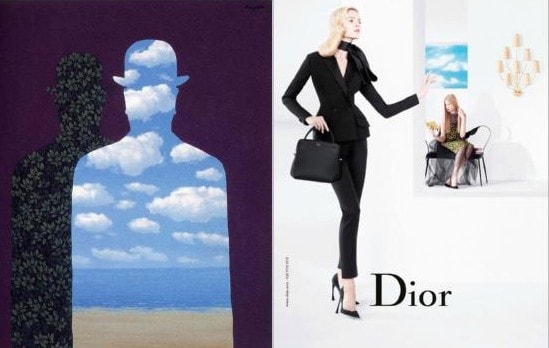 Should humanity take these evident signals as a last wake-up call?

Lately I went to the exhibition “Traumbilder” (German for “ideal image”/”vision”) in the Pinakothek der Moderne in Munich. A huge collection of surrealistic masterpieces featuring Dalí, Ernst, Magritte and many others. In May, the museum will launch an exhibition about Ernst Ludwig Kirchner, one of the most important expressionist artists. The Guggenheim museum in New York is currently presenting Kandinsky’s work, the Musée d’Orsay in Paris will curate an exhibiton about Van Gogh (a trailblazer for the expressionist movement) and the Albertina in Vienna will present Joan Miró’s work from September on.

The striking ubiquitousness of surrealism and expressionism is undeniably meaningful. Should humanity take these evident signals from the runway and the art world as a last wake-up call? Is the exceptional interaction of both movements just a curious and unpleasant coincidence? I don’t think so. Or as the German philosopher Hegel said: “Thinking is the negation of what we have immediately before us.”