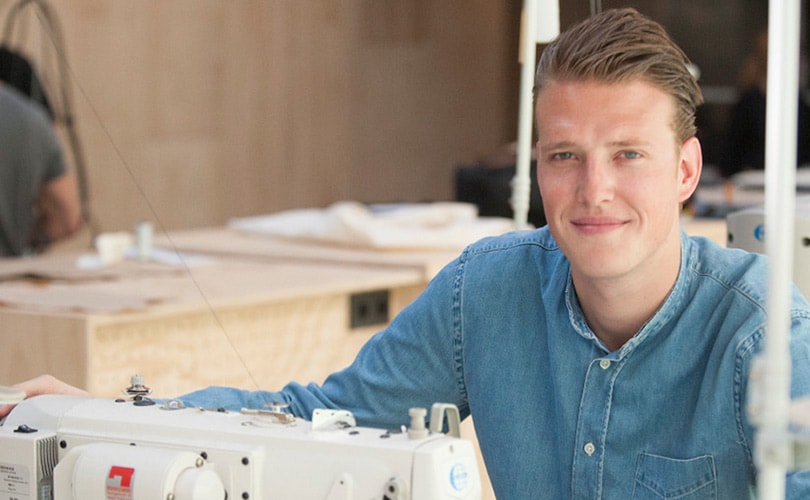 With the Jean School’s first alumni already having entered the workforce, FashionUnited contacted a few of them to catch up and take a moment to map out for which denim companies they currently work. Starting from this week FashionUnited will introduce the alumni with a quick Q&A. Today we start with Niels Mulder, Denim Developer at Edwin Europe.

Why did you choose for Jean School?

“Since I was 15 years old I have worked in fashion and jeans stores. This sparked my fascination for jeans, and a few years later my curiosity had come to the point where I really wanted to learn for myself how the fabrics and patterns are created and what makes up a pair of jeans.”

What was the most valuable thing you learned at Jean School?

“The most important thing would be that I learned how to work with software such as Adobe Illustrator to understand a technical drawing and subsequently make one myself. The combination of theory and practice has been a really good way to learn, for example by first learning how to draw and design an item and then having to actually manufacture it.”

Where do you work now, and what is your job title?

“I currently work for Edwin Europe as a Denim Developer Menswear.”

How would you describe what an average day in your life looks like?

“The fun thing about this job, is that it really depends on the time of year what ‘an average day’ looks like. Around the kick off of a new season, it could very well be the case that you are flying to Tokyo for an inspirational trip. However, at other times you are spending every hour of the day behind your laptop to prepare tech packs. Right now, I am working on fabric ranges, which means loads of meetings with suppliers. It is all very dynamic.”

What ambitions do you still have?

“In the future, when I have earned my stripes in this function, I would really like to eventually become creative director. And of course I still have many more dreams and ambitions, but out of respect towards Edwin I do not want to focus on that now. I really enjoy my job with Edwin and hope to be working for him for many more years to come!”

Jean School offers both a three-year Dutch programme as well as a one-year international version which is completely taught in English. Both the Dutch as well as the English programme are focussed on four specific themes: innovation, sustainability, history and craftsmanship. Students receive training in a variety of both practical and theoretical aspects of denim, including sewing, pattern making, washing and buying. The programme is closely tied to the industry: students regularly receive guest lectures by professionals from the industry, and they also get the chance to participate in projects for which they have to collaborate with companies. Additionally, students annually attend the Amsterdam Denim Days as well as the Global Denim Awards and get to be involved in the renowned denim trade fair King Pins. More information on the programme, admission requirements and the application can be found on the Jean School website. Since its establishment in 2012, a total of 21 students graduated from the programme. Of these alumni, the large majority has found a job in the denim industry.

Also check the storymap with all the Jean School alumni from the class of 2015 and 2016 here.
jean school workinfashion alumni niels mulder