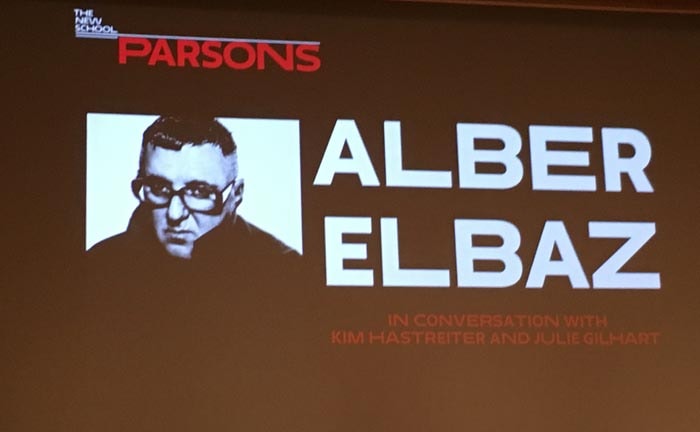 “There’s something quite fabulous about being free,” said Alber Elbaz to a packed Tishman Auditorium at Parsons School of Design on Tuesday evening. He announced he’d arrived without a driver, assistant, or PR person with three phones to tell him where to sit and what to say. He had come to join his longtime friends, Julie Gilhart, international business consultant and former SVP of Barneys, and Kim Hastreiter, founder of Paper magazine, onstage for an hour of frank conversation that was high on emotion. Before he began, he passed out bags of candy to the cheering audience of predominantly students, and three boxes of Kleenex “just in case.” It was going to be that kind of evening.

A pair of students behind me gushed, “Oh my God, he’s so cute!” Another, overwhelmed at hearing him speak and attempting to express her heartfelt wishes for his future, was invited onstage with the words, “Come and give me a hug.” We were all a little ferklempt.

An industry in distress

During the period since Elbaz was let go from Lanvin, which he referred to with comic melodrama as his “tragedy,” he has evidently spent much time reflecting. “We’re not happy,” he said, recognizing an industry in distress, with everyone he speaks to within it struggling.

He attended the Met Gala the previous night and described the Manus x Machina exhibition as one of his favorite ever, because “it is so much about whispering again.” He has previously criticized the loudness that has become so important in our culture. But to those who believe that fashion is one long party that never ends, he said that it does sometimes end. But it’s not always a sad ending. A self-confessed TV addict, he revealed that he feels nauseous when he hears Heidi Klum on Project Runway utter those famous words, “One day you’re in, the next you’re out.” The audience laughed along empathetically. “You’re laughing,” he said to them, “but I was crying.” 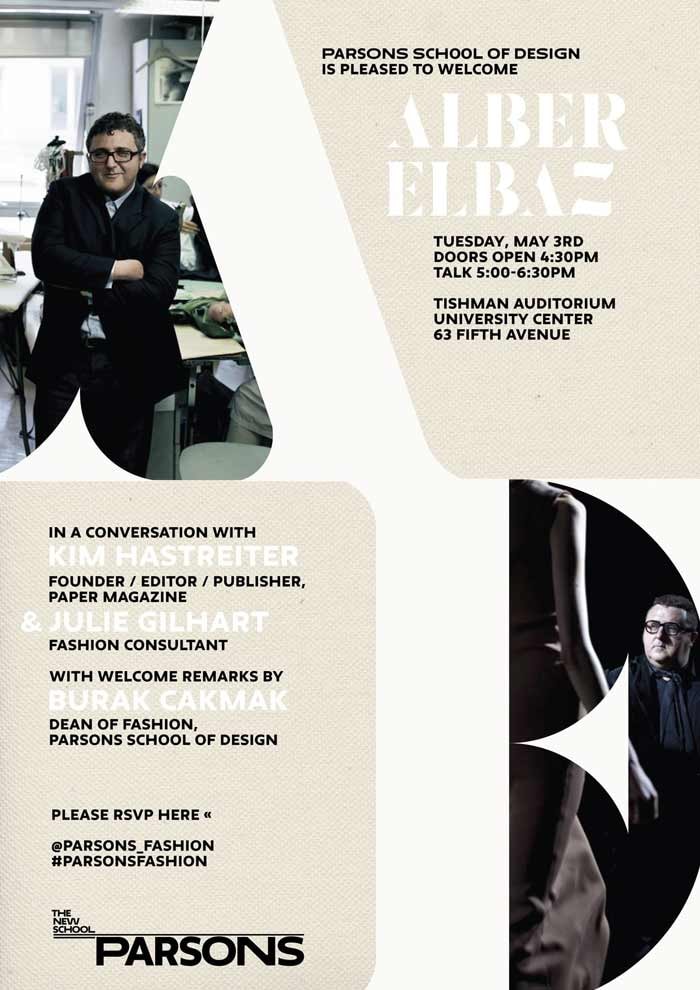 Although unwilling to go in-depth about Lanvin (one sensed it was because the wound was too raw as much as for any legal issues), he elaborated that in the days following his dismissal, he walked around Paris under seemingly endless rain. But when he went inside and touched his face, he was unsure if what he felt was the city’s rain or his own tears. He is still unable to sketch; he can only write his ideas.

He describes himself now as an outsider but expressed no wish to trash the industry he feels he still belongs in, and although he revealed no future employment as of yet, he identified a desire for teaching in his future, having spent the afternoon with Parsons students. During the course of the conversation he named past employers Geoffrey Beene and Yves Saint Laurent as important mentors from whom he had been lucky to learn, and also namechecked his friend, the late course director of Central St Martin’s, Louise Wilson.

He had many pieces of advice for students. He urged them not to think only of being a catwalk designer. He advised them to, yes, use Google but not to be lazy and let it do all the work, as it can be dangerous for design. Don’t take the research to the runway, he said, but manipulate, eliminate; be inspired by the past and by tradition, but make it relevant for the women of today. “You know where it comes, from but no one else will know the secret.”

Designers are not machines

Despite the corporate blunders associated with the end of his fourteen years at Lanvin, Elbaz expressed an understanding not only of the role of designer in today’s furiously paced industry (“designers are not machines”), but also that of the CEOs who oversee conflicting demands from salespersons and shareholders and consumers alike. He encouraged a need for better dialogue and communication within all levels of a company and for everyone to attempt to inject more love and less fear into the current system.

When asked about the Show-Now Buy-Now movement, he replied, “We are throwing ideas on the table and whatever works will live, whatever doesn’t will die.” He viewed the current upheaval as positive evidence that the industry is questioning itself, whereas for too long, in his opinion, it had failed to question. However, he said individuality should be at the heart of every business’s decision. “We shouldn’t try to be like everyone else.”

This was also poignant advice for the listening students. He explained that he tried for two years to get his first job at Geoffrey Beene. The legendary New York designer at whose side Elbaz worked for eight years was described by Hastreiter as “a strong spice,” one who notoriously went through assistants at great speed. But Hastreiter said, “He loved Alber.” A student asked what books or movies Elbaz enjoyed. He responded that words and stories inspire him most, and when he is designing a collection, he does not listen to music, or read, or watch movies because “everything inspires me. Everything influences me.” The only concession he allows himself is CNN and coverage of world catastrophes, which help him put into perspective his own anxieties. “I’m always doubting. Not to be sure of yourself is nerve-wracking.” He said, “When I’m designing a collection, I’m stressed; when I’m not designing a collection, I’m stressed.” He confessed to seeing only the mistakes in his past work and reading only the negative reviews of his shows.

Reminiscing on his successful working relationship with Beene, Elbaz told the students, “When you work for others, don’t try to be them. Be you. Then an alchemy happens where two things become a third thing, and that’s even better.”

Skeptical of the mediocre, he pushed students to be their best. He said he doesn’t go in much for politics and to great laughter, announced, “I don’t deal well with bitches.” In choosing how to say something over the importance of what to say, Elbaz said he loses his voice altogether. “Divas are actually not often the best ones.” 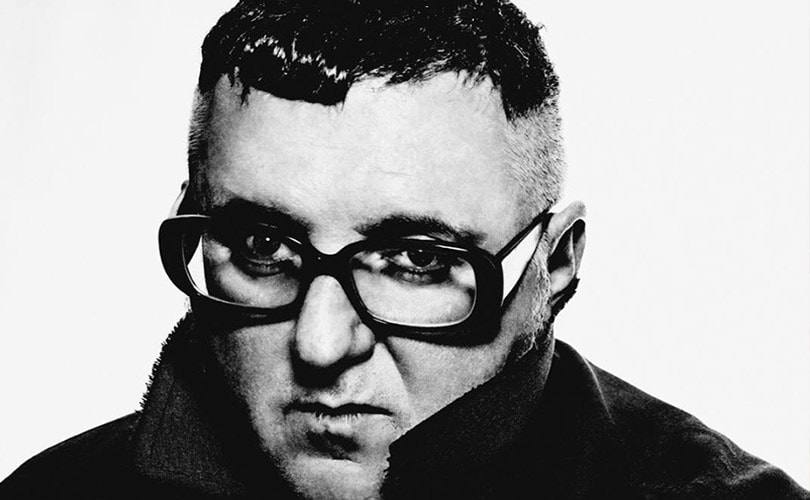 Elbaz doesn’t see himself doing anything other than fashion, maintaining it’s all he knows, and adding, to more laughter, that he doesn’t even know how to drive. But he emphasized the need to work with joy so that the joy will come back in what is being produced. The only pages of any contract he has signed that he studied with great attention were the ones dealing with freedom of creativity. Still, all he aspires to do is create exquisite clothes, work with women individually, and only with people he loves. He still finds fashion “a beautiful reason to wake up every morning.”

When the evening’s event was first announced, 1,200 people rsvp’d that same day. Clearly Alber Elbaz remains as beloved a figure as ever within the industry. As the evening wrapped up, Hastreiter playfully asked the audience for suggestions, in 8 words or less, of what Elbaz should do next. Offers ranged from doing a reality show (“Alber Takes Manhattan”) to running for president, with one enamored female even calling out “Marry me?”