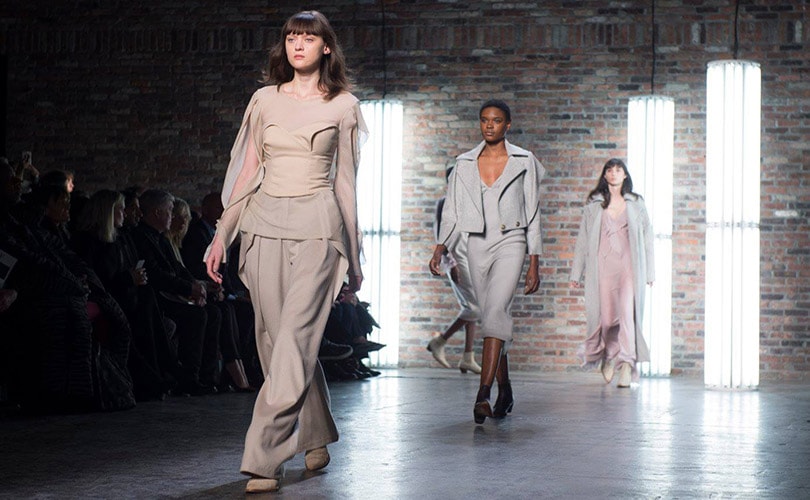 And the European nominees for the 2016/2017 International Woolmark Prize are...

The annual International Woolmark Prize has announced the European nominees for its 2016/2017 cycle. Stemming from 11 countries, the nominees count ten candidates for the women's wear award, which are as followed: Roshi Porker from Austria; Kimstumpf from Belgium; Cockerel from the Czech Republic; Nicholas Nybro from Denmark; Etienne Deroeux from France; Tim Labenda from Germany; Giuseppe di Morabito from Italy; Peet Dullart from the Netherlands; Leandro Cano from Spain and Gülçin Çenge from Turkey.

The ten nominees for the men's wear award are: Devon Halfnight LeFlufy from Belgium; Mirka Horká from the Czech Republic, ̈Tonsur from Denmark; Matières Paris from France; Brachmann from Germany; Luca Larenza from Italy; Mareunrol’s from Lithuania; Evan Menswear from the Netherlands; Pablo Erroz from Spain and Benan Bal from Turkey.

These are the European womenswear nominees for the 2016/17 International #WoomarkPrize, one of the most important events on the global fashion calendar. Congratulations!

A number of the nominees have already participated in design competitions in the past and shown their collections on schedule during Fashion Week. For example, Nicholas Nybro, who has shown his eponymous label during Copenhagen Fashion Week since 2014, was one of four designers chosen to take part in Dansk Design Talent and Gülçin Çenge also particpated in last year's cycle of the Global Denim Awards, working together with integrated yarn and weaving factory Calik Denim who chose her after seeing her debut collection at Istanbul Fashion Week in March, 2014.

In total over 75 designer from 62 countries have been selected to participate in the next cycle of the International Woolmark Prize. The six regional finals for the competition are set to take place during the month of July in Hong Kong, Sydney, Milan, London, New York and Mumbai. Nominees have been asked to create a capsule collection of six items which they will present to experts from the industry. From each regional final, one women's wear and one men's wear designer will be selected as the winner and move on to compete in the international finals. The twelve semi-finalists will be given a grant of 50,000 AU dollars to develop their collections for the final.

Congratulations to these talented menswear nominees for the 2016/17 International #WoomarkPrize European region.

The final women's wear and men's wear winner will be awarded 100,000 AU dollars each as well as the honour of having their collections sold in premium department stores around the world such as Harvey Nichols, Saks Fifth Avenue and David Jones.