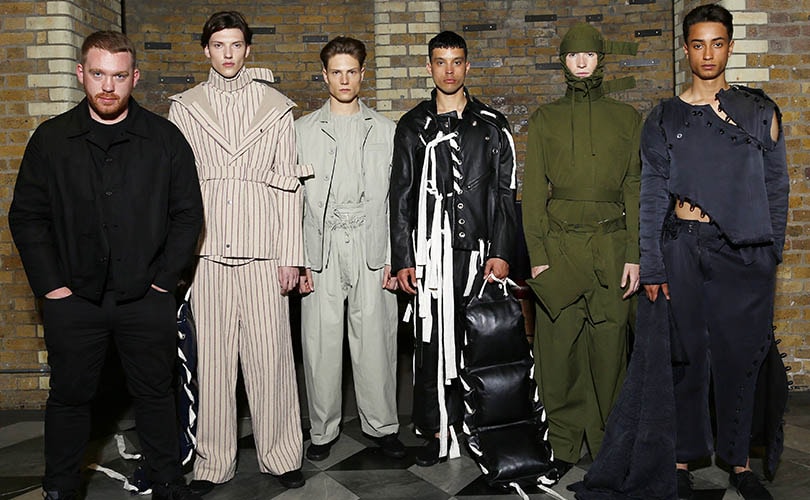 London Fashion Week menswear designer Craig Green has been named the winner of this year's annual BFC/GQ Designer Menswear Fund by the British Fashion Council, supported by Vertu. A Central Saint Martins graduate, Green founded his eponymous label after graduating from its MA in 2012.

The announcement was made last night at a reception hosted by Caroline Rush CBE, Dylan Jones OBE and Gordon Watson, CEO of Vertu at the Boundary Restaurant in London. "I would like to congratulate Craig Green, the third winner of the BFC/GQ Designer Fund," commented Dylan Jones OBE, Editor of British GQ and Chair of London Collections Men.

"This year the level of talent and business acumen presented by the shortlisted designers was even higher than usual, with each designer making a case for themselves. However there was only really one winner, as Craig demonstrated a unique ability to build commercially on the incredible awareness driven by his high-profile shows during London Collections Men. It was a unanimous decision, as he showed a seemingly innate ability to understand the demands of growing a small business. He is a more than worthy winner of the prize."

A photo posted by British Fashion Council (@britishfashioncouncil) on May 18, 2016 at 11:30am PDT

As the winner of the BFC/GQ Designer Menswear Fund 2016, the UK's largest menswear award, Green is set to receive a 150,000 pound grant to provide the needed infrastructure to take his label to the next level, as well as a 12 month mentoring support programme. Green was previosuly shortlisted for the 2016 award, alongside of fellow London Fashion Week designers Lou Dalton, Silbing, Christopher Raeburn and Astrid Andersen.

"The panel was impressed by the focus, determination and talent of the shortlisted designers," added Caroline Rush CBE, Chief Executive of the British Fashion Council. "All have bright futures and will play key roles at London Collections Men. But, there can only be one winner and Craig demonstrated incredible maturity, he has a clear plan of how the fund will benefit his business and how the mentoring can assist in his business growth over the next three years."