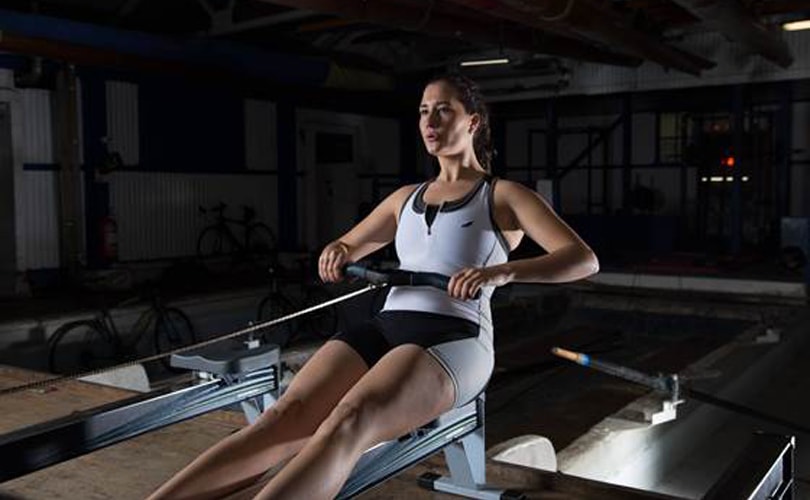 When your two passions are fashion and rowing, it might seem as if finding a way to combine both close to impossible. Yet, BA Retail Buying (which is now called BA Fashion Buying) alumna Demi Johnson did exactly with the launch of Blue Heron: a brand for luxury sportswear, which focuses on rowers.

As a former president of the De Montfort University (DMU) Rowing Club, Johnson experienced firsthand the problems finding good, fashionable rowing gear. “I loved rowing at DMU, but the gear was a problem,” explained Johnson in an interview with DMU. “It was all pretty standard, not very flattering and the fabric was not very nice. I am 5 foot and 5 inches (1.65 metres) and I found myself wearing the same gear as someone who was a foot taller than me.”

After graduating from DMU in 2013, Johnson spent two years working on designing rowing gear that met the standards she herself had wanted for her own gear. During the process, she benefited from the knowledge she had gained during her internships at O'Neill and British cycle brand Rapha. She also relied on feedback from rowers she personally knew. Thanks to their input, Johnson came up with the idea of adding a pocket on the back of her rowing tops as this allows its wearer to store a water bottle or other items they might want to bring with them on the water. After years of work, the ambitious fashion alumna can show the result of her hard work: a collection of three garments for men and three for women.

Yet, the fact that Johnson has launched her brand does not mean she now intends on taking a step back: she supposedly is already eying opportunities for expanding Blue Heron into other markets. Eventually, she hopes to also add other items to the collection to offer a full range of performance wear that will not exclusively appeal to rowers but also to those practicing other types of sport.