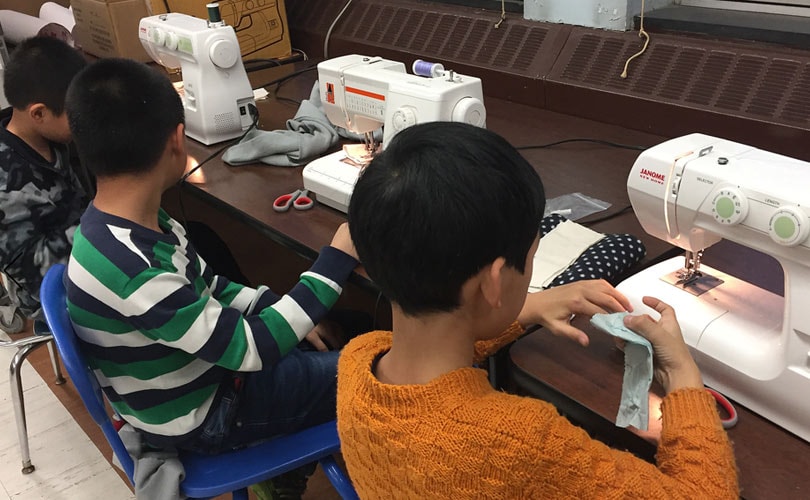 New York - As New York City’s preeminent fashion institutions, Parsons and FIT, prepare to open their studios and sewing labs to a new batch of bright-eyed freshmen for the fall semester, a slightly different fashion school is gaining notice. And while images of children operating sewing machines have often accompanied exposés on sweat shops and exploitation, Britta B. Wheeler, the founder of The Children’s Institute of Fashion Arts (The CIFA), a non-profit organization devoted to expansive education in the culture and craft of clothing for kids, provides a positive and empowering narrative around such images. FashionUnited sat down with her to discover why the search for the next great American designer might begin as early as pre-school.

Why did you decide to open the Children's Institute of Fashion Arts?

I feel on a very basic level that kids are more and more removed from the materials and practices that make up our known world. The act of sewing is an essential skill that is being lost to the average person. Knowing how to make a simple stitch is an empowering act for children. They can have some measure of control in effecting what they wear, how they present themselves, and who they are as they understand how to work with cloth and the design process. Plus, the kids are on fire with sewing! Once they get it, they love it and go in so many different directions with it! 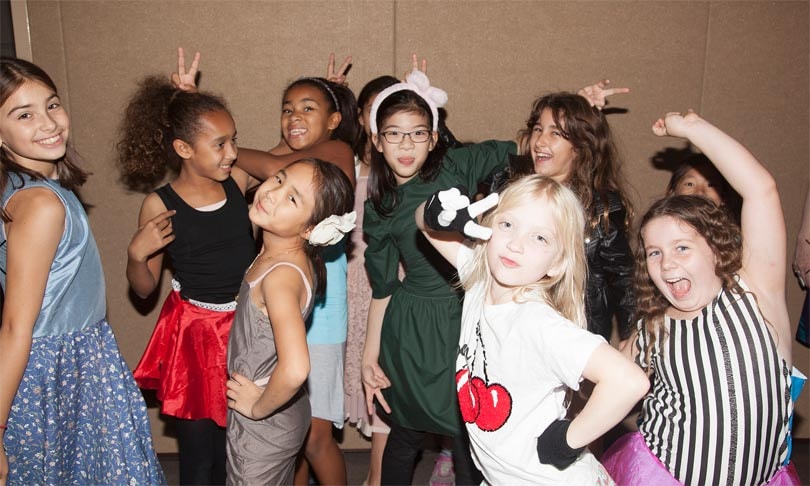 How did your background and career prepare you for this?

As a young child, I attended Montessori schools and throughout my life have enjoyed self-directed forms of progressive education. As a teenager, clothing was a bridge to my personal creative expression, a way to communicate who I was and connect with like-minded people. I studied fashion design at undergrad, went on to get a Masters and Ph.D. in Cultural Sociology, and an MFA in Interdisciplinary art, then taught college-level sociology and fashion design up until 2015. Clothing is one of the most social forms of creative expression and fashion is a very heightened and specialized form of that expression. The realm of fashion as art is one of the most dynamic, ongoing, continually challenging and changing forms of creative expression.

When did the CIFA launch and how many students have passed through the classroom?

I had the idea for the CIFA in 2012 and started running workshops myself that same year. The CIFA became established as a non-profit organization in April 2017, and it has been experiencing rapid growth. We’ve had programs for over 400 kids over the last few years with six teachers.

Describe the age group of the students and their daily timetable.

We teach kids as young as 5 years old through high school age. Currently we teach in New York City's public and private schools. We have ongoing afterschool programs and we run curricular workshops during the school day. We will be running our second weekend workshop this fall with partial funding from the Lower Manhattan Community Council. We are expanding our programs each year. Once we receive enough backing from government sources and private sponsors we will open a space of our own in New York City’s Garment District.

How does what you do differ from some of the more advanced kindergarten activities?

We are not giving “sew by the numbers” approach or “pot holder” projects. We create programs that supplement the NYC Common Core Curriculum, deepening it with hands-on programming and contextualizing the production in culture and history. We also try to embrace the kids and their own cultural identities because many schools in NYC represent the various neighborhoods, each having a predominant cultural connection. Even the introductory levels of instruction are comprehensive, connective and interdisciplinary. We collaborated with a first grade teacher whose school is in the Theater District, and as part of their Community Study, he invites theater people to the classroom and the kids produce their own musical. We were invited to provide the costuming curriculum. We discussed the history of medieval clothing, and taught 60-first graders how to hand sew the townspeople costumes for their play. 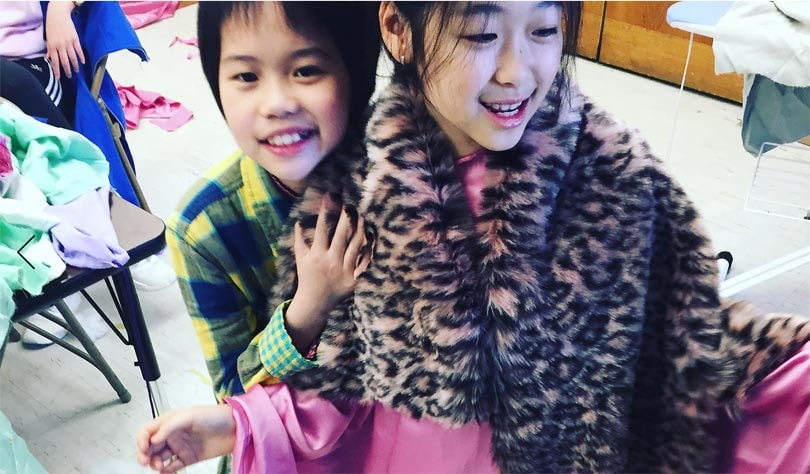 New York City kids are very sophisticated and know so much about math and science and are very articulate. They are longing for ways to make things, to apply what they already know, and gain confidence, not through affirmations and PR programs but through actual, progressive, and appropriately challenging projects. Once we give them some basic skills, and permission, they start to explore their own natural inclinations toward invention and creativity. Yes, there are struggles, like when the thread tangles or the machine gets stuck. Then we get an opportunity to help them learn how to work with challenges: guide them to slow down, examine, think, and analyze.

Why do you think is it important to teach young children fashion history knowledge?

So many reasons: The visuality of media demands that kids understand images and are pressured to be visual themselves. Many kids want to be cool and hip, others just want to fit in and not call much attention to themselves. The history of fashion is the history of the world—clothing as well as “fashion” being a primary cultural expression rooted in tradition, ethnicity, religion, natural materials, scientific and technological advancements. The first computer was a loom! (The Jacquard Loom was impetus for the invention of the punch card technology that the early IBM Corporation used to translate into binary computer coding language.) Everything about society comes back to the simple act of basic materials and processes, and their practical applications.

Why is sewing such an integral part of the program?

In contemporary society there are many disconnections that basic sewing skills and design thinking will remedy: fine motor skills, the disconnection between hands-on learning and analytic and intellectual learning; the simple act of producing a stitch and making a connection between a two-dimensional fabric and three-dimensional garment; planning and executing a project gives the simple pleasure of productivity, as well as persistence, learning to manage frustration and attention deficits. And there is a primary connection to actually having control over your life through the ability to make and alter what you wear. Kids know this. 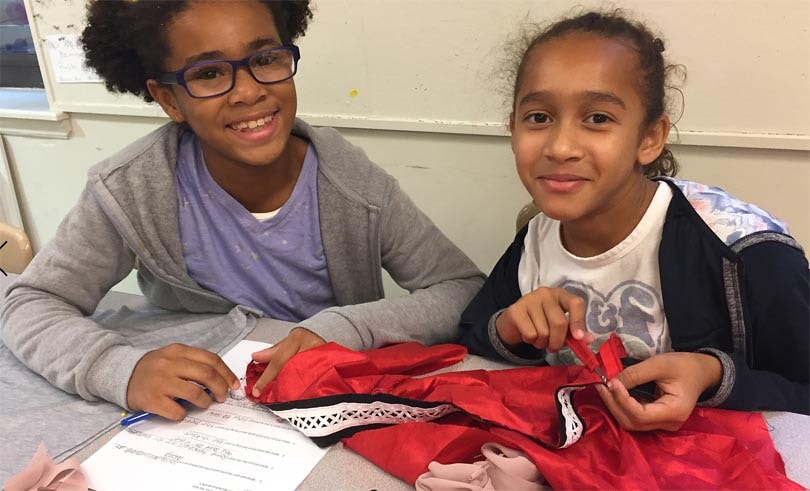 In addition, some children tell me that they are having negative thoughts. We know the suicide rate is higher than ever for kids now, the first generation of children raised on smart phones. After one fourth grade boy had made a small needle weaving in our workshop “Textiles in Colonial America,” he told me that his negative thoughts went away and that he felt happy and not stressed out.

What do you see in the future for The CIFA?

The vision for the CIFA is to become a full-service organization in New York City’s Garment District that will let young people experience both the glamour and the grit of fashion design and clothing production. We are actively seeking industry partnerships. We will host special guests and events, bring school groups into our space to not only inspire future designers but bring a new level of awareness to the fashion arena. We will collaborate with celebrities and industry to create exhibitions that will highlight important issues of the day including sustainability, the connections to media, identity and social justice issues, as well as technology and invention, and the ways that contemporary fashion reflects and responds to societal issues.

”If you talk to designers I think you will find that many of them knew they wanted to create beautiful clothing from the time they were children.”

Finally, do you really believe it's possible to spark the curiosity of the next Ralph Lauren or Donna Karan at such a young age?

Of course! If you talk to designers I think you will find that many of them knew they wanted to create beautiful clothing from the time they were children. I hear from many adults that they wished they had something as profound as the CIFA when they were growing up––me too, that’s why I invented it!