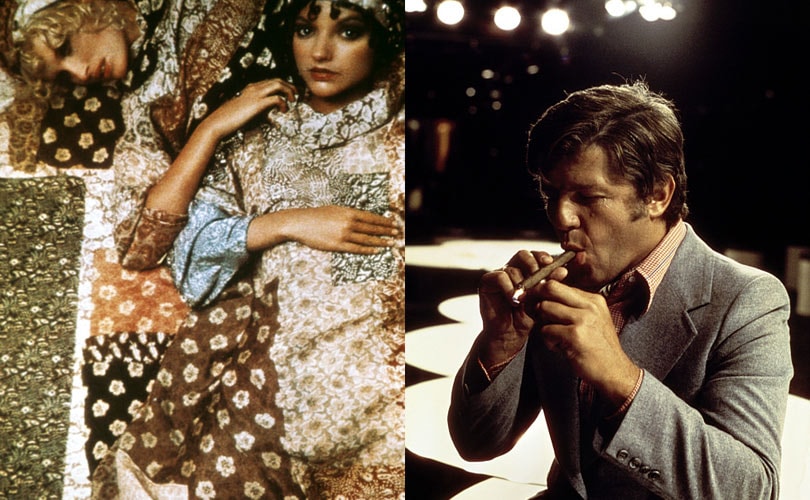 Sometimes shocking, often game-changing, always visionary, certain designers become the name on everyone’s lips for a millisecond. Then they’re gone, no longer part of contemporary conversation, and barely even a footnote in the fashion history tomes that threaten the slender legs of the chicest coffee tables. If we stumble upon their names, we sit back and wonder, How can we not be talking about them anymore? In this series, Fashion’s Unsung Designers, I will spotlight some of those who I believe deserve, not only to be remembered, but perhaps name-dropped over cocktails.

As the fashion press prepares to land in Paris to view the Fall 2016 collections from the city’s storied houses, we return to the decade of moon landings, and to 1962, when a young tailor named Jean Bousquet landed in the city from Nîmes. As a youthquake rippled through society, he founded a fashion house and christened it Cacharel after a duck typical to the Provençal region. Bousquet’s vision of liberty and lightness caught on immediately as flower-powered androgynes of the day cast off their bras and reached for the item that launched him: a button-up shirt, which became known as “the Cacharel,” made in a crease-resistant crépon fabric previously only used in underwear.

Business boomed, but it was the three-way creative partnership Bousquet entered into in 1967 that stands up to examination these thirty years later, as an example of that rarest of phenomena: how to capture the zeitgeist in artistic vision while simultaneously producing commercial gold...

Liberty of London was a ninety-year-old apparel and textile manufacturer of Regent Street that was famous for luxurious silks, cottons and cashmeres, both imported and woven on its own looms, and adorned with Oriental, Pre-Raphaelite, and Art Nouveau motifs. There was also a prevalence of flowers: lotuses, irises, jasmine, wildflowers, poppies, daisies, interspersed with birds, peacock feathers and swirls. After its founder’s death in 1917, Liberty’s appeal began to fade, and by 1968, its signature fabrics had fallen out of favor, and were mainly consigned to childrenswear. But they found favor with Jean Bousquet who, at first sight, knew they were perfect for Cacharel. 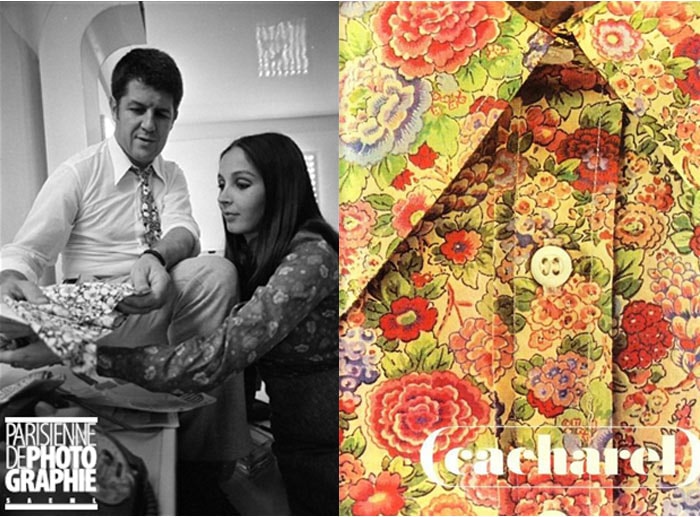 Bousquet then promoted his young sister-in-law, Corinne Surrat from intern to designer, recognizing in her the esprit of the Cacharel girl: with long hippyish hair and soulful green eyes, she wore Shetland wool pullovers with her grandmother’s shirts mixed with fleamarket finds. Surrat began on the Summer 1967 collection, designing exactly what she liked, swept along by the freewheeling, playful mood of emancipation and nonconformity that was swirling all around. Surrat adored Liberty’s childlike patterns which seemed a direct rejection of the starchy prim suits associated with adulthood. 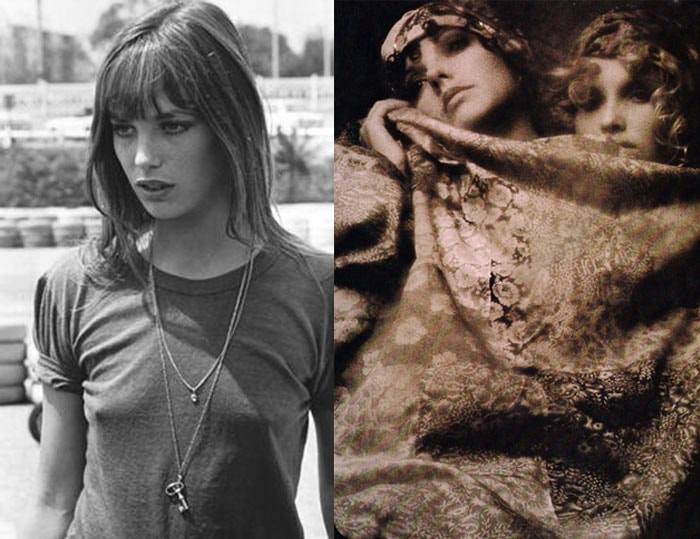 Unlike his English contemporary, Barbara Halunicki, whose Biba girl drifted about in swooning velvets and dripping bias satin, Bousquet proposed crisp cotton dresses and gaberdine skirts; lawn evening dresses, delicate Lolita-inspired day dresses with puffed sleeves, dancing pleats, kicking skirts; adolescent lines in sorbet shades, all of which emerged out of his relentless search for lightness. Bousquet and Surrat travelled to London to plumb the Liberty archives unearthing prints of Japanese landscapes, cruise ships, bouquets, anything unconventional and quirky. The prints themselves became “fashion objects” and the garments in which they were used evoked the nonchalance of France’s most alluring woman-child, Jane Birkin.

Surrat said later of that time: “There was so much enthusiasm and everything was easy. Everything just flowed from the source. I created what I wanted to wear, everyone went along with it and it sold. We could turn something that was perfectly natural to me into a success. It was light, spontaneous, pleasing, we believed in it!” 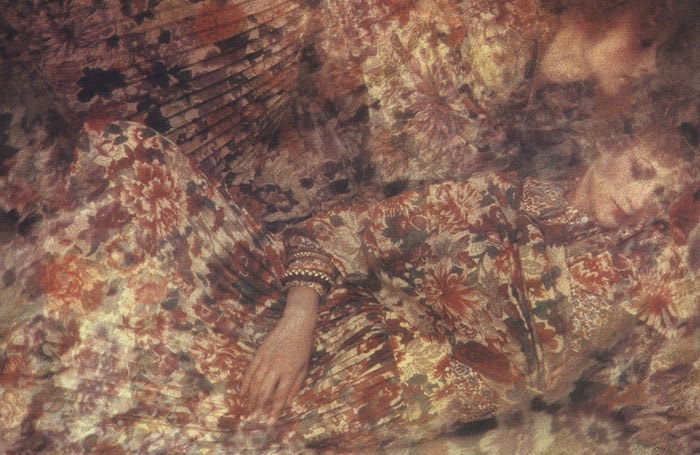 Further consolidating his dream team, Bousquet brought in a relatively unknown photographer, and friend of Surrat, who would go on to establish the indelible image of Cacharel: Sarah Moon. Bousquet once again had the instinct to give his well-chosen collaborator carte blanche. Her dreamy scenes of women bound by reverie are reminiscent of so many evanescent heroines of literature and art: Shakespeare’s Ophelia, Lewis Carroll’s Alice in Wonderland, Rossetti’s Beatrice, Brontë’s Jane Eyre... Fragile porcelain waifs with fiery emotions who are suspended in time, depicted in a half-light, eternally fueling our imaginations.

Moon later described the women she photographed as “characters in search of an author.”

Bousquet was one of the first to develop such unique branding using primarily the power of photography; the ambience of a Sarah Moon/Cacharel campaign became instantly recognizable and gained cult status. Soon the advertisements were winning prizes and the company, so much enamored with flowers, launched several best-selling fragrances, followed by menswear and childrenswear ranges.

When the company celebrated its twentieth anniversary in 1982, it was still reported to be the top French womens ready-to-wear company. Cacharel’s Summer of Love lasted much longer than that of the flower children who were its inspiration.

However the modern fashion “system,” as we have taken to calling it, doesn’t offer much in the way of these kind of stories. As Sarah Moon says, “We were keen, we were fearless, everything succeeded.”

An altogether different kind of youthquake

In the 70s, Le Figaro described Bousquet as an “astute businessman who thought simultaneously in artistic, social and business terms.” Unfortunately his reputation was tarnished in the 90s when, serving as elected mayor of Nîmes, he was found guilty of corruption. Today, the Cacharel label, with Bousquet still in place as president, struggles to capture the spirit of the times and has gone through multiple design directors in recent years. But the influence of his original Cacharel vision on designers of today such as Isabel Marant is unmistakeable, while his instinct and the trust he displayed towards his hired talent is considerably less in evidence among fashion’s modern businessmen.

It was a simpler time. But it is one worth remembering as Paris reels from the after shocks of a different kind of youthquake: the high profile dismissals, lawsuits, and cases of creative burn-out among young designers hired with great fanfare by money men, but whose creativity is questioned and under scrutiny at every board meeting.

Power to the people, man. 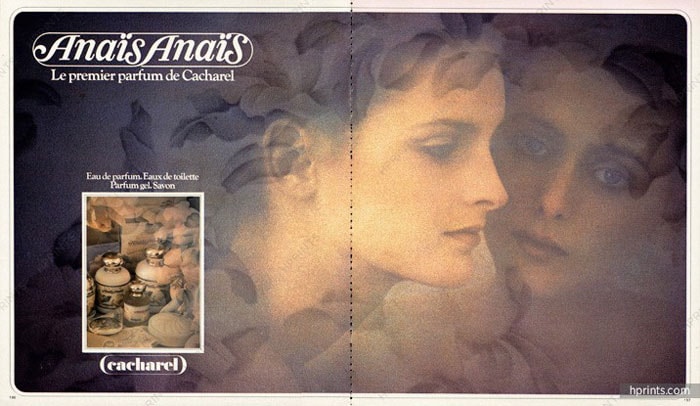