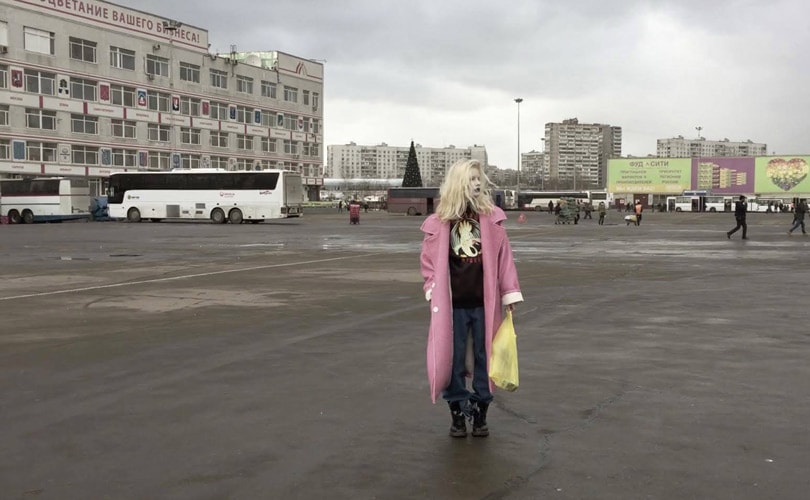 Russian designer Maksim Bakshaev has been announced the winner of the first Fashion Film Award. The award was created by Nick Knight, director of the London-based fashion film website ShowStudio, in an attempt to offer a platform for upcoming filmmakers. Bakshaev, who is one of the founders of fashion brand Outlaw Moscow,winning short film featured a number of different individuals being followed through Moscow.

Bakshaev’s film, which is approximately 5 minutes long, opens with an opening shoot of a girl with blonde hair wearing a long pink coat from Outlaw Moscow’s latest collection. The camera follows her during a short walk through a Chinese market, while occasionally zooming in on items which are on sale. As the girl is being called, the camera's focus shifts to a young man,in another part of the city who is picking up his phone at the exact same time. After shortly showing the man and his girlfriend, the focus shifts to another man who is taking a walk in the city. Once the evening falls, the film shows a woman trying to catch a taxi. The film reaches an end when the taxi driver has dropped the woman off.

”The characters in the film at the same time seem to be disconnected from the surroundings but they are also very natural to the location where they appear,” explained Bakshaev in an interview with CNN. “This controversial sense of the disconnection and the attachment of the ‘outlaw people’ to their life in Russia is very representative and authentic.” The jury, which consisted of industry experts such as ShowStudio director Nick Knight and stylist Nicola Formichetti, considered Bashkaev’s work to be the best amongst the ten finalists.

Bakshaev’s prize consists of 10.000 pounds which he can use to create a fashion film. As part of his prize, he will also receive mentoring from Knight. Additionally, the Russian designer was presented with a professional camera from Red as well as a trip to Australia where his film will be screened at an event which has yet to be announced. Other finalists whose work as nominated for the award, included fashion filmmakers John Arthur, Jon Jacobsen and Kenji Hirano.

”I have wanted to do a fashion film award for a long time,” explained Knight in an interview with Clash Music. “Fashion and movement is very important, when a designer creates a piece of clothing it is always to be seen in movement and I think fashion film is the best way of doing that.” By creating the Fashion Film Award, the fashion photographer hopes to “encourage new young filmmakers to really help them to embrace this new medium and to create this new medium”.