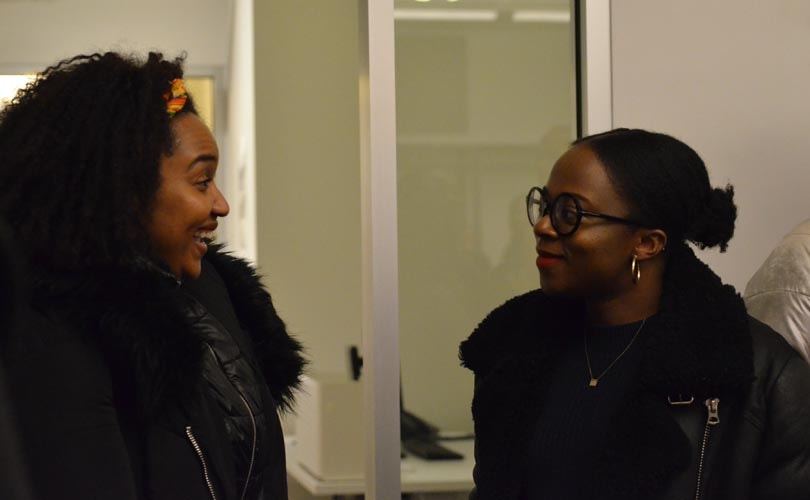 People of color describe challenges of working in fashion

Kent State University, in collaboration with ourCusp, a community for people of color in the fashion industry, hosted an event at its New York City campus to support diversity, equity, and inclusion. A second audience joined via Skype from the school’s main campus in Ohio to hear the panel of professionals discuss candidly the unique challenges faced by people of color going about their daily work, to learn strategies to navigate common uncomfortable situations, and to understand how people of color are reshaping the industry of the future from the inside.

“Concerns we have as people of color are not the same as other people’s,” begins Jenae Green, special events manager, Bergdorf Goodman, before introducing her co-speakers, Celeste Thompson, Vice President of HR at Janou Pakter Executive Search, Nicole Horsford-Holley, Director of Development & Production at Marissa Webb, and Ashalii Miree, Senior Buyer/Director of Ecommerce for Calvin Klein. That launches a spirited conversation covering an array of categories.

Code Switching: Do we have to?

Thompson: Code switching is par for the course, it is what it is. We could be having a conversation in the hall, speaking in colloquial terms, when I go back into a meeting, I’m not speaking that way. That’s just part of the depth and beauty of who we are that we’re able to do it and know when to do it.

Holley: Code-switching or dualism is a dance. It’s been a core of the black community, you have your house voice and your out-of-house voice, an unfortunate necessary evil.

Miree: When interviewing, code switching is most important and you’re not selling out. You’re not trading your culture, it’s something you have to do to be successful in this industry. You need to change your perspective about it. An interview is the art of persuasion, convincing people you are the right person for that job. So the interviewer needs to feel comfortable with you. Ultimately you do what you need to land the job.

Green: I have been at jobs where they’ve hired based on who’s going to fit in best with the team. I could be under-qualified for the role but if they feel I’m trainable and can mesh well, I’m going to get the job over someone who has the skills. I’ve been told that. Code switching could be the deciding factor in getting a position.

Thompson: They say someone is not a “culture fit” which is code. I challenge it: Are you saying that because this is a person of color? But I do it from a place of love and from the context of data. Make sure you know what your value system looks like so that it can guide you. 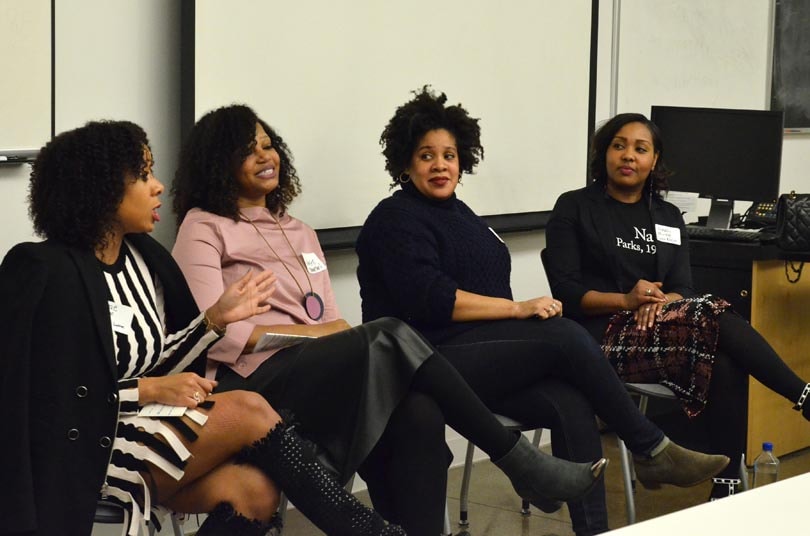 Green: I’ve found I’ve had to get to know about things, for example, everything that happens “out East” (the Hamptons) I know about because that’s what my co-workers are talking about. I’m not talking about these things with my group of friends, but I figure it out so I can have have those conversations and be part of the office culture.

Holley: We must think 4 steps ahead, how to interject ourselves into the conversation in a natural manner, to speak about a topic intelligently.

Holley: Separate from colorism, class strain is a big issue in our community. I’ve heard things like "She thinks she’s so smart" or "she’s so uppity now” when I’m just trying to climb the corporate ladder. It can make you diminish your dreams, especially if you’re the first of your family to have attended university, and it is easy to question yourself or think you’re living a lie when you’re trying to get ahead.

Thompson: There’s a complexity around this. Family members can say “oh you work for the man.” I intellectually don’t really understand it, but I don’t let it distract me from my mission to work for companies that are aligned with my value system. The name on the door means nothing if it’s not aligned with your purpose.

Miree: Of course, one of our first concerns is how to wear our hair which is something other women don’t have to consider. Now, natural is more acceptable, but when I started I wore my hair pulled back. Be confident, comfortable, well groomed, never disheveled, but if you don’t get hired for how you wear your hair, it’s not the company for you.

Thompson: Observe boundaries. Express yourself but know the brand. Wait until you get in to change the world.

Green: I waited 6 months in a job before my curls came out. I was very nervous to interview or show my natural hair too soon.

Thompson: You need to talk about difference but if it’s exhausting it’s okay to say I’m a little tapped out answering questions about my hair.

Green: When non-black friends and colleagues who want to learn ask why it takes five hours to take my braids out, I don’t make a joke about it. People usually ask in a joking manner but I reply very seriously. Then people don’t tend to ask again.

Holley: We are very built differently, clothes look different on us. Be conscious of that, but not by shaming yourself either. I was tapped on the shoulder and it was suggested I reconsider my clothing choices.

Holley: I delete emails a lot. Remember how something is going to be read. Read it over to a colleague, to yourself, walk away, come back with perspective.

Green: Sometimes it helps to pick up the phone so that nothing can be taken out of context and they can hear your voice.

Thompson; Being outspoken, verbalizing directions can be taken as aggressive, angry, demanding. Listen to your tonality, understand your audience. Sometime you can’t phrase things a certain way.

Green: Non verbals. My dad told me that crossing my arms sends a signal I don’t even know I’m sending.

Holley: Hand on hip can be aggressive-looking.

Thompson: A colleague of mine walks around with a little smirk, like she has a secret, but it is a coping mechanism she developed in a corporate context. 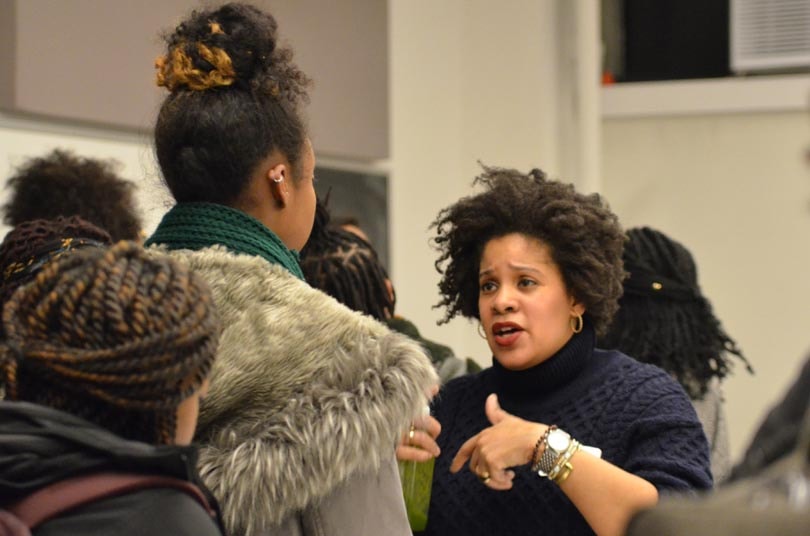 Green: Gucci, Burberry, Prada, Katy Perry, they’re all coming up with their solutions, diversity councils, but I don’t know if it’s up to them to come up with solutions.

Holley; You name it, someone has done something recently. It’s like, oh it’s Tuesday, we’re so desensitized because it has been happening for so long.

Miree: Ultimately we will not see a true change until we get in the decision-making seats. If we think about it, there were so many approvals those things had to undergo, so many eyes were on them, before making it to market which is scary.

Thompson: The fashion industry has been a very racist industry from the outset, consistently they deliver. There’s nothing new there. In the immortal world of Maya Angelou “people won’t remember what you said, but they’ll always remember how you made them feel."

Holley: They’re apologizing, forming committees, but it’s already out there. You have to take your money elsewhere.

Green: If you don’t trust them, take your dollars elsewhere. That’s how you show them. Our money talks.

Bring your own chair

Miree: We’re not going to make a difference until we’re at that table. It won’t be an easy feat but that’s why it’s so important to code switch and to get into those positions of power. Then there’s no stopping us. Don’t wait for the seat. People tell you lean in, pull a seat up if there’s not one for you, kick the door in, figure it out. I don’t mean it in an aggressive manner, but being smart and strategic about how you influence people. If you’re not yet at the table, you can still have an influence. If you see something that is not okay, give your opinion. That’s how they begin to trust you more, include you in things.

Holley: This is not a whitewashed industry by any means. It’s extremely diverse. But the issue is that at its higher levels there’s less representation. Knowing how to time it, being productive, participating, understanding the openings can help bring you to the next level in your career.

Thompson: There’s something happening, black women are on the cover of everything, from ads for automobiles to tampons, and I don’t know how I feel about it. People say “we’re here” but there’s something about it that doesn’t make sense to me.

Holley: Black women are being splashed on everything because they know we have spending dollars. They’ve realized we’re educated, graduating with degrees, they know they have to talk to us. We’re being targeted, but you have to see through it, you have to question the authenticity. We’re not monoliths, don’t speak to us as such. 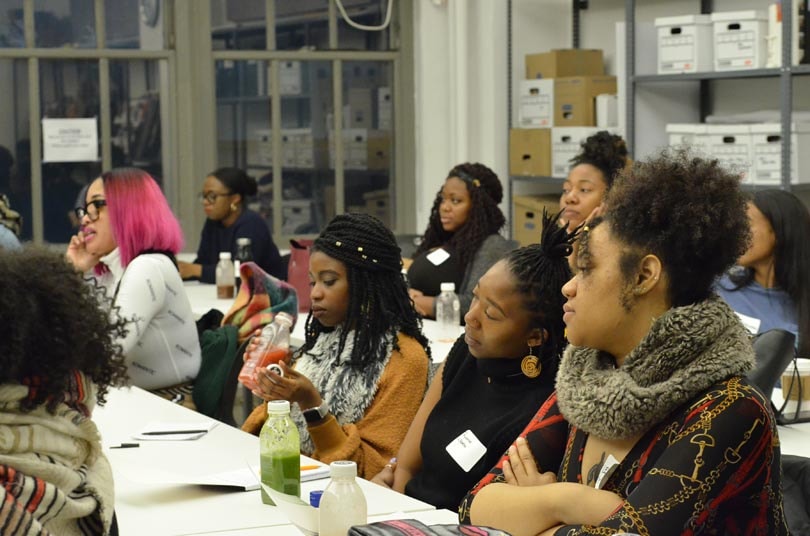 Fielding accusations of not being “for the culture”

Holley: Leave those people alone. Surround yourself with those who have the same mindset, goals. You are ever-changing so seek out those who are uplifting. Erase the negativity. Be comfortable with not being everybody’s friend.

Green: We need people not just at the black-owned companies––that’s great––but we need people to be at the luxury companies, to be the president. If they think you’re not for the culture, but one day you’re running the company, eventually they’ll see what impact you’re able to make in that position. They’re not on your career journey with you so you shouldn’t feel you have to explain yourself.

Holley: I think there are ways we’ve been taught that harden us, specific to us. There’s something to be said for taking some of the weight of history off your back, being more carefree. Back in the day, our community was all we had––butcher, doctor, dentist all living close by. Desegregation meant we sprinkled into other communities and didn’t have to rely on each other so much, but we lost the tradition of saying hi.

Thompson: Trust comes in when you can observe the landscape and share something of yourself with people. There are levels though, be mindful, put yourself out there, but don’t share everything.

Holley: There’s something to be said for having difficult conversations, and there are ways to have friendships and mentorships with people who do not look like you, and learning from them, about their culture, will change you as a person. Ask questions to bridge the gap, take the time on the people who are worth it. Not everyone is.