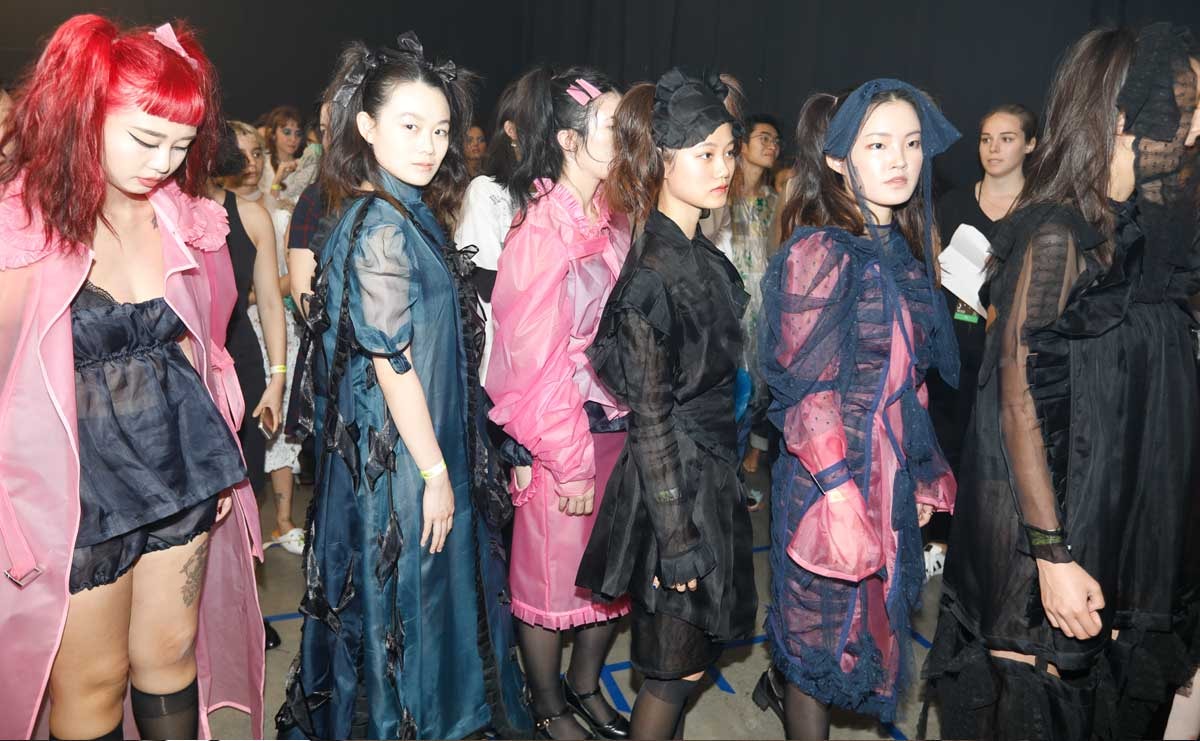 While Marc Jacobs officially closed NYFW, the Rhode Island School of Design presented its graduate collections a few hours later with no sign of a fading spotlight or lack of designer star power. Before the 17 BFA collections took the runway, the President of RISD Rosanne Somerson, who sat front row flanked on either side by designers Nicole Miller and Diane von Furstenberg thanked Tommy Hilfiger for his sponsorship of the evening’s event.

A fragrance collaboration with International Flavors and Fragrances also formed part of each student’s thesis, something we have also seen at Parsons MFA exhibit where students developed fragrance with the Robertet Group. It seems the future of fashion will be a more intimate, multi-sensory experience. 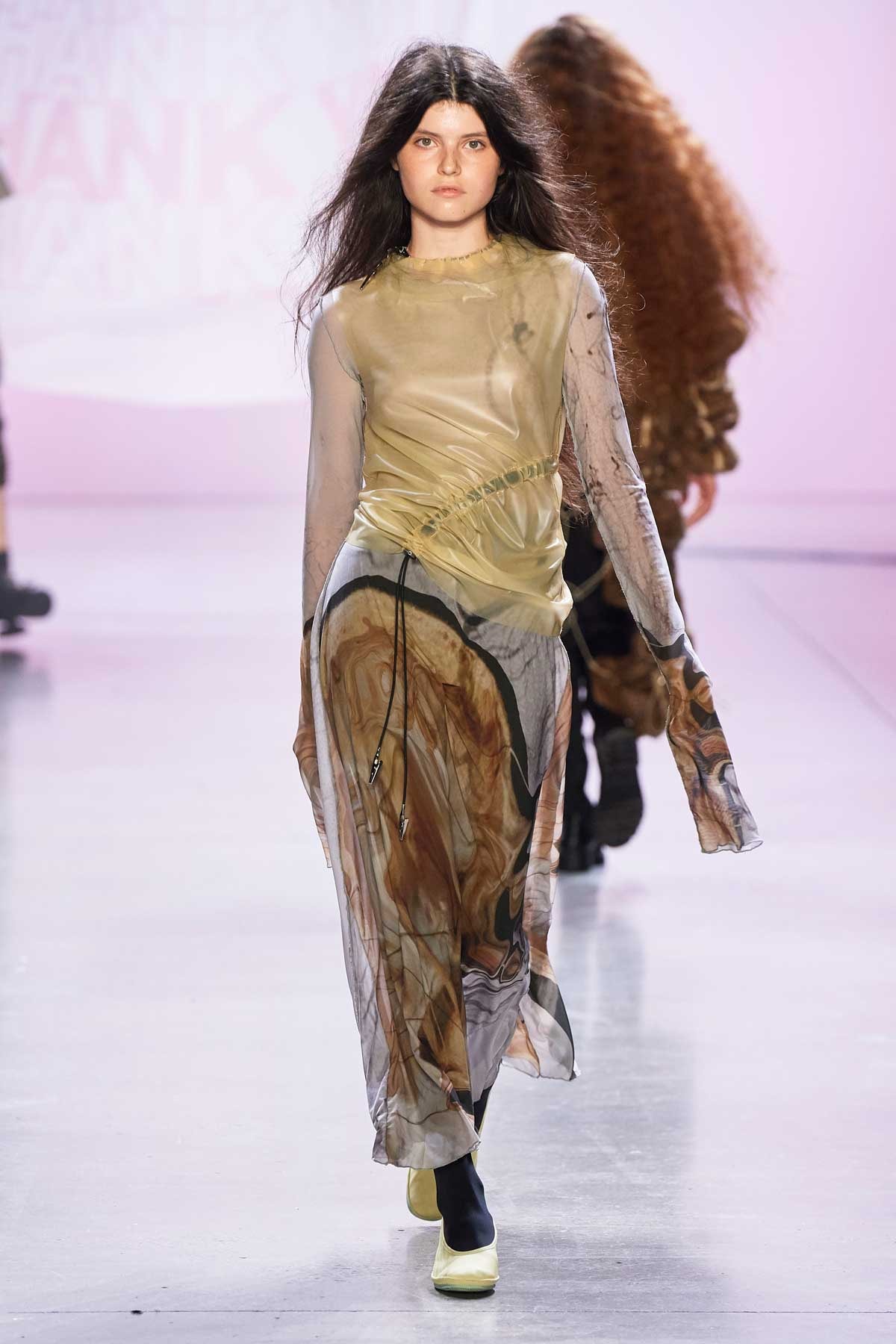 The opening looks from Masha Kurguzkina of whiskey-colored mohair and elasticated latex, in forms recalling medical uniforms and patients’ gowns were the result of deep research into neurological conditions such as epilepsy from which she also conceived prints that conveyed a Pre-Raphaelite charm only heightened by the flowing russet hair of some of her models.

Shay Gallagher’s micro checked jersey dress swagged by drawstrings, accessorized with matching inflatable arm floats and dissected with slivers of apple green spandex which recalled the shapes of leotards worn by 80s aerobics fanatics, was high-energy and packed with joie de vivre––a stark contrast to the banality of the current activewear market. 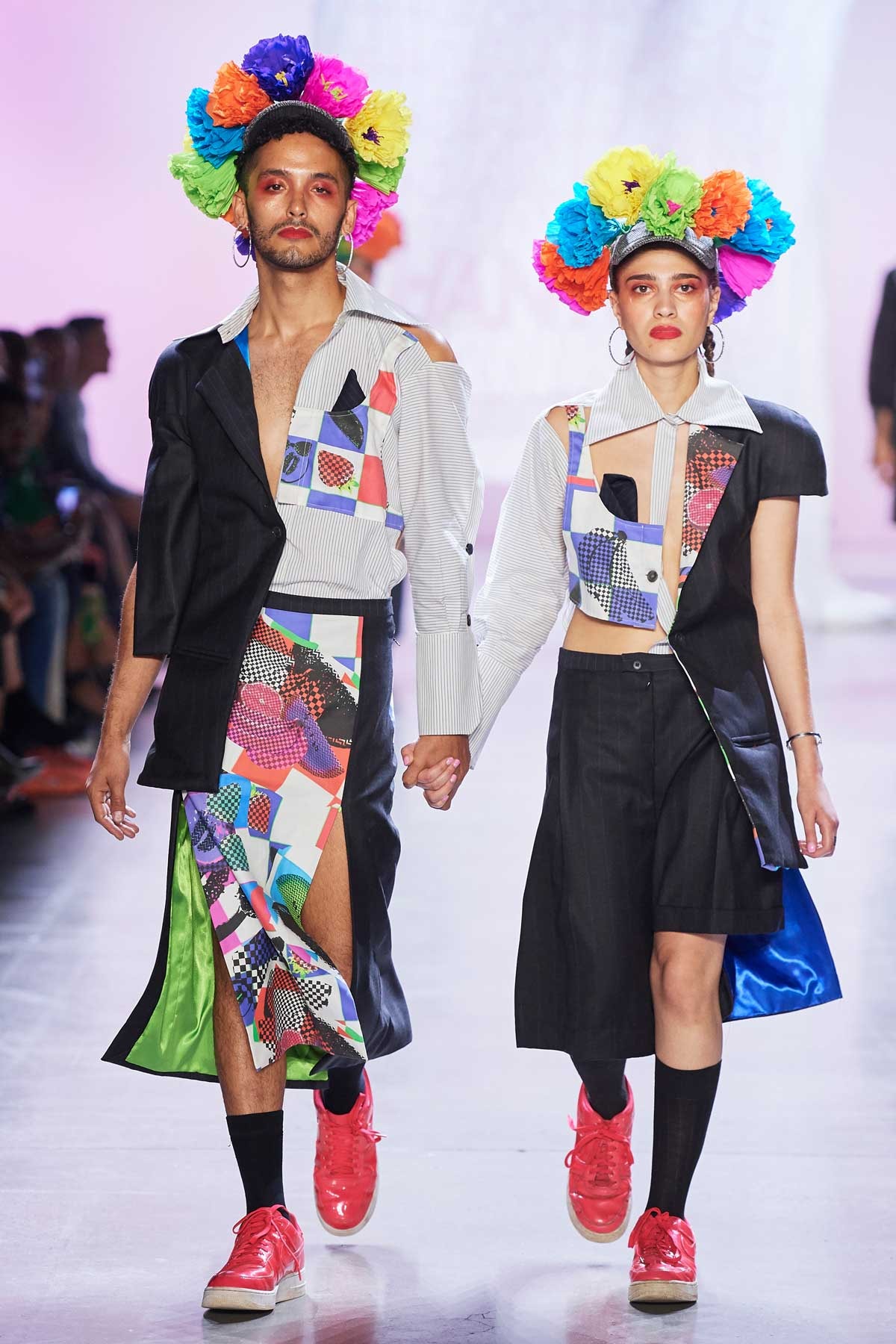 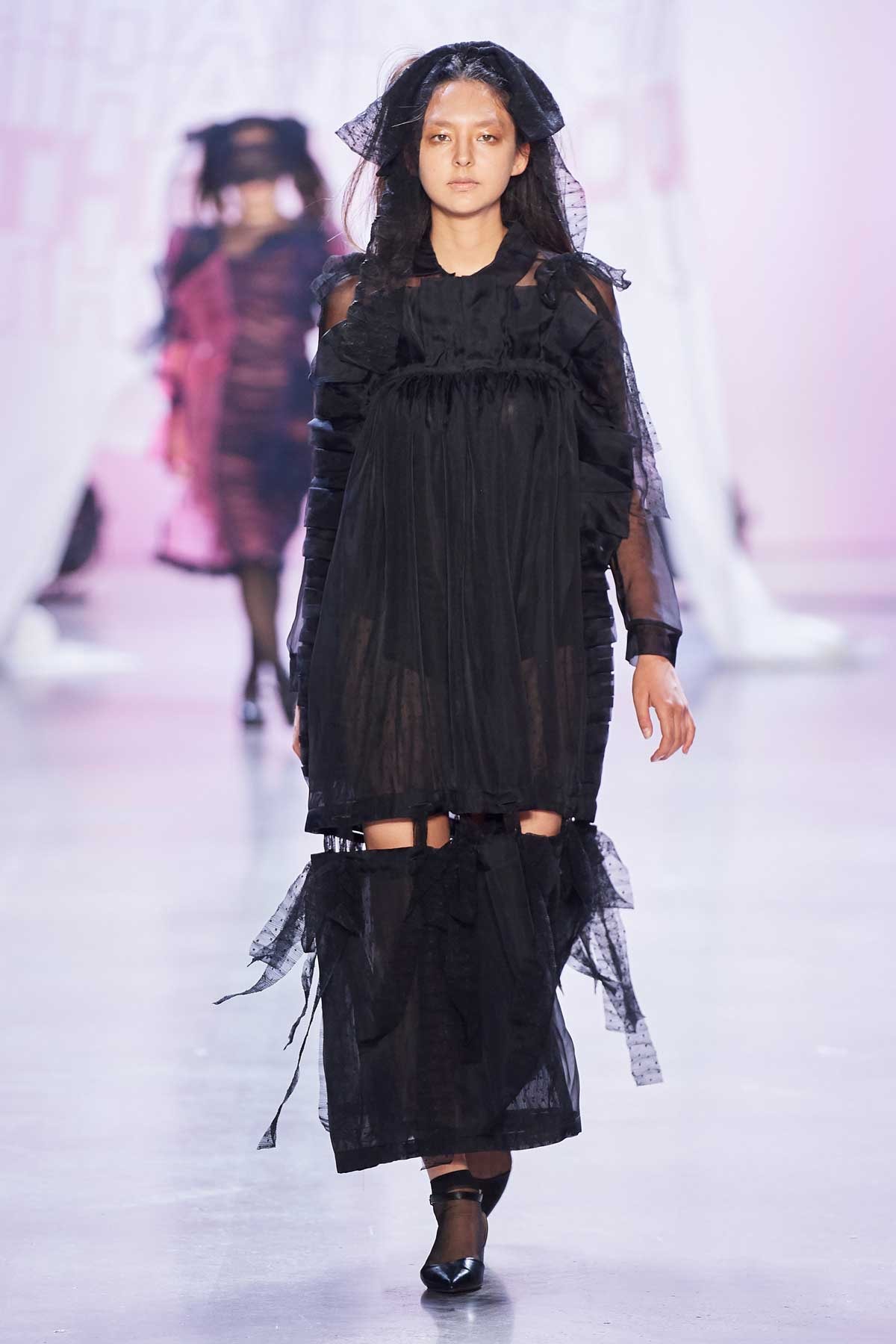 Just add a pair of red lips and shades of Carmen Miranda and Frida Kahlo emerged from Antonio Armani Léon’s exuberantly bright gingham which clashed convivially with garments made of fruit-printed tableclothes. 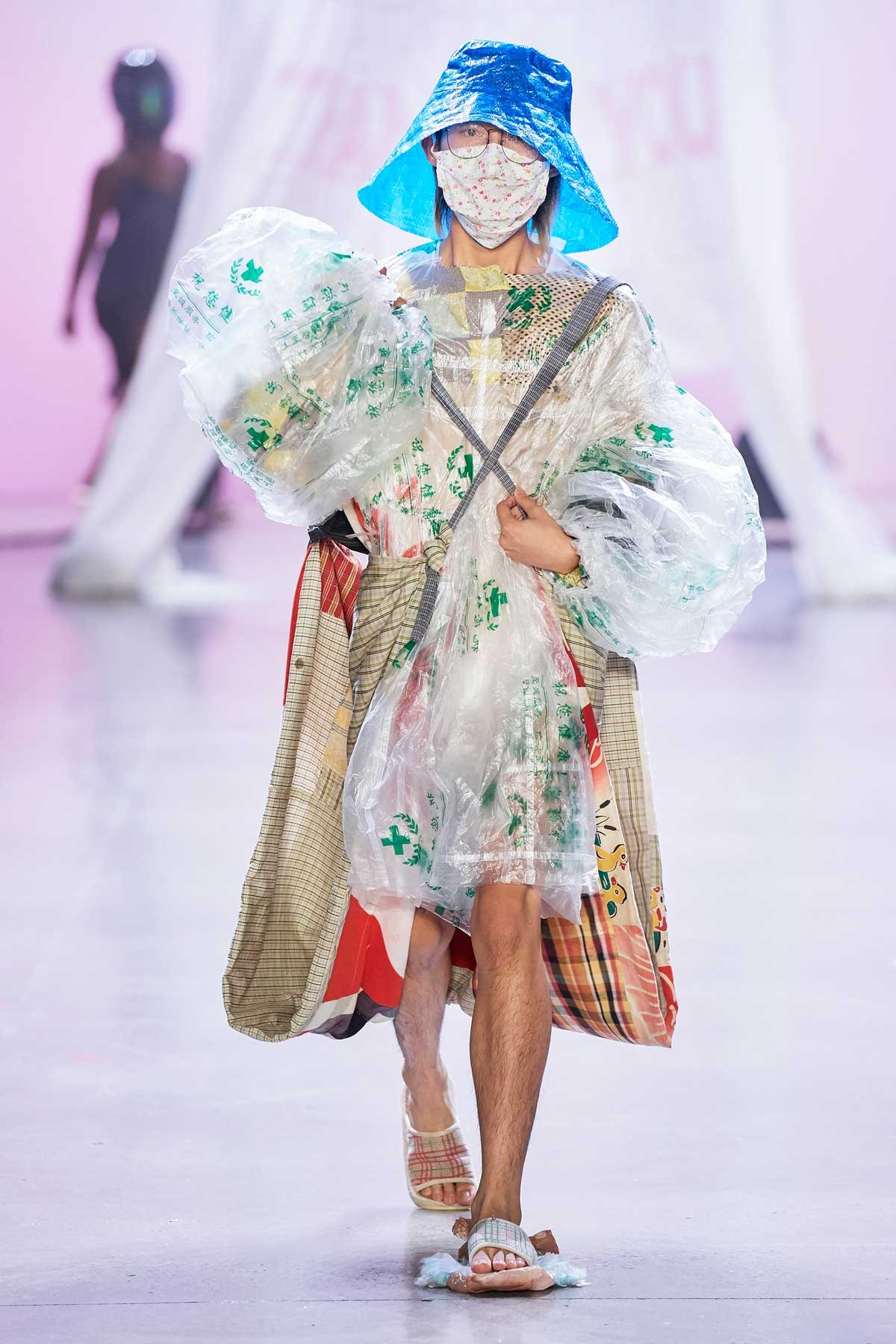 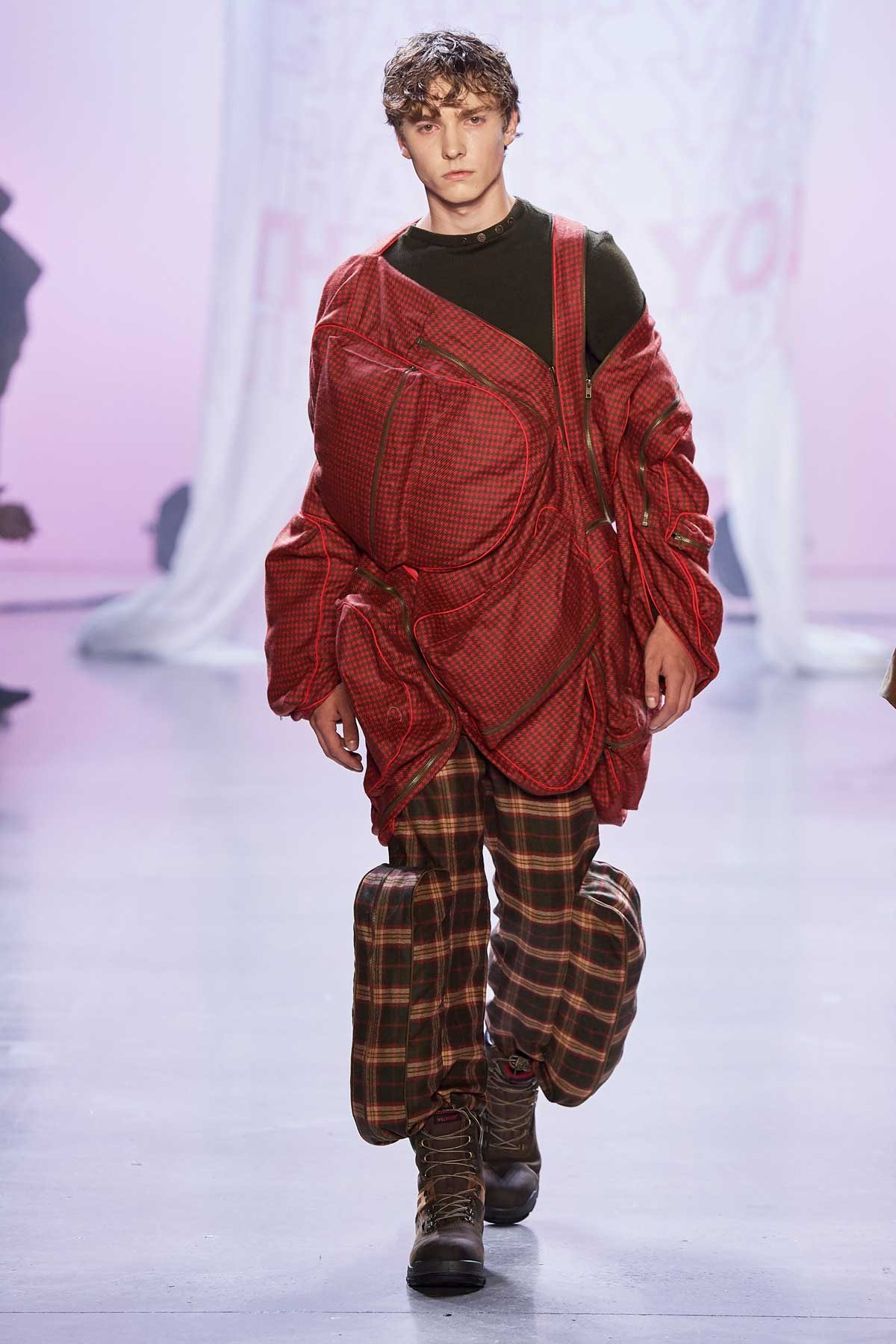 Plastic consumption and pollution is on the industry’s mind but Justine Nguyen Nguyen irreverently worked humble grocery bags into a froth of fun for coats, and patchwork separates sprouting foliage, in a tribute to Vietnamese motorcyclists.

Alex Riddle designs on the defensive against arctic conditions but stands out amongst outerwear designers for her protective stance on the environment. Avoiding plastics and synthetics even for zippers, in favor of organic natural fibers which she waterproofed, she assembled a range of utility wear, repurposing backpacks and even a 50-year-old beaver vest, which has so many pockets that nomads and transplants of the future will wear their own storage facility.