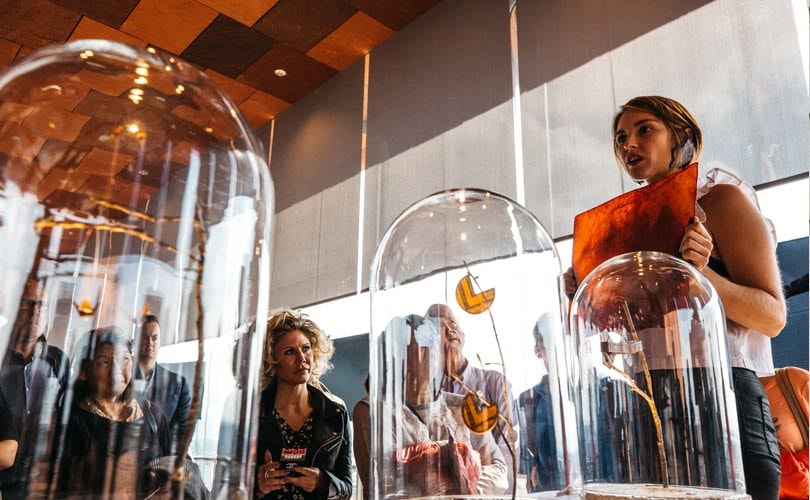 Antwerp - From here on out, the term technology will be synonymous with Antwerp. Last weekend the SuperNova festival took place for the very first time, an event displaying the future of technology, proving that the fashion world, too, is no stranger to the ever-growing wave of digitalization.

From flying cars to cocktail-mixing robots, from applications for checking your health to interactive fashion: 200 companies in 16 locations brought the world of tomorrow to the attention of the general public during SuperNova. The festival was organised at the initiative of Pascal Cools of Flanders DC, the Flemish organisation for entrepreneurs in the creative industry, and Jürgen Ingels from Scale-Ups.eu: “It was about time that we organise such an ambitious event in Flanders. There is so much potential in Flanders and that’s what we have to show more often. At the same time, we must not hesitate in attracting more of the best from around the world to our region in order to learn from them.” For the professionals among us, a conference took place on the 27-28 September, which included inspiring talks, a pitch format for scale-ups and a technology fair. One of the guest speakers was Jasna Rokegem of Jasna Rok, the only high-fashion design studio in Belgium where fashion and technology are inextricably linked with one another. Jasna is the co-curator at the fashion pavilion in the Museum Aan De Stroom. 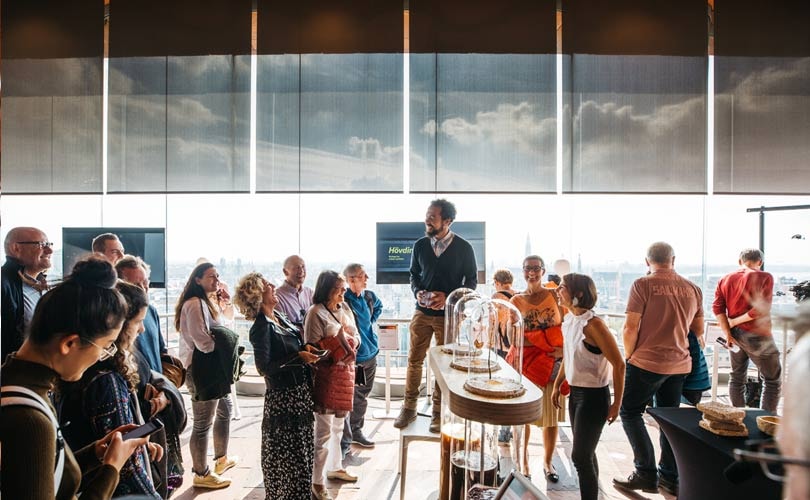 Biodegradable materials, drones and clothing with sensors: “Using several inspiring cases, I wanted to provide answers to three questions: why do we see technology everywhere, but not in our clothing? Why do we still view fashion in 2D and not in 3D? With fashion as the second most polluting industry in the world, how can we reduce the fashion footprint?" This is what Jasna Rok talked about during her guided tour in the fashion pavilion.

On the one hand, technology allows us to experiment. That’s how the Dutch designer Maartje Dijkstra exhibited her TranSwarm Entities dress. A drone dress made entirely from 3D printed parts and mini drones that can fly out from the interior of the dress and swarm together around it, moving to the beats of music producer Newk. The Belgian W.R.Yuma showed us how you can contribute to helping the climate problem using technology such as 3D-printed sunglasses made of plastic waste.

Furthermore, Anita Evenepoel and Tine de Ruysser from Belgium inspired everyone with an extravagant ball gown and a collection of small black dresses that were created through laser cutting, thermoforming and relief on spacer fabrics. Following the laser cutting, the created notches then stretch the fabrics wherever they come into contact with the body. 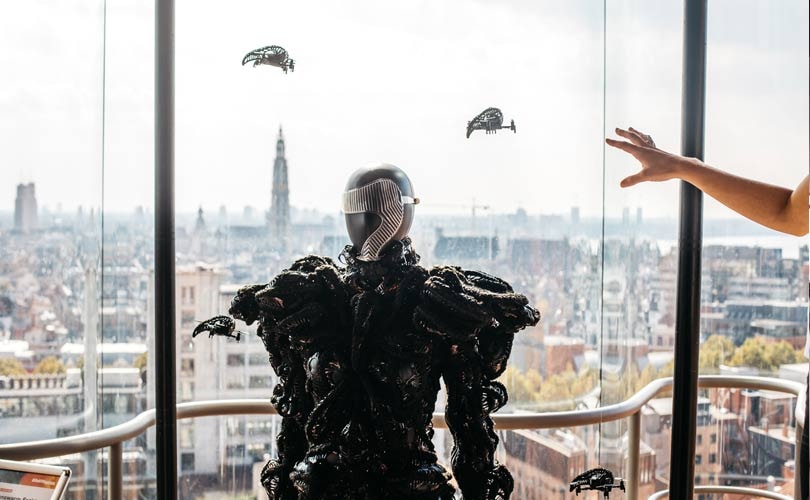 Technology also allows us to create sustainable materials. This was demonstrated by the Danish SOLVE apparel, the Belgian GLIMPS, HNST and Resortecs. Cristina Dan from SOLVE presented her Omdanne collection for the first time in Belgium. It consists of only three pieces of clothing that can be transformed into more than 30 styles. Moreover, these three items are 100 percent biodegradable. HNST produces jeans made from 56 percent recycled denim, while the GLIMPS design studio shows that we can easily discover new fashion-tech applications by ourselves. For example, from a simple drink such as kombucha – which is made by fermenting tea, vinegar, sugar and bacteria – you can cultivate organic leather that after two weeks has the dimensions of cowhide and is strong enough to make jewellery. And this year, Cédric Vanhoeck of Resortecs, won the Global Change Award of the H&M foundation, the Nobel Prize in fashion, which is awarded each year to the entrepreneur who truly shakes the world. Resortecs has developed a thread that dissolves easily at high temperature, enabling you to simply separate an item of clothing into its separate parts and to re-use these separate pieces of fabric for new purposes.

On the other hand, technology can add lots of functionality to our future wardrobe. For her Closed Loop Smart Athleisure Fashion collection, Marina Toeters designed a smart shirt that can keep pace with your heartbeat and respiratory condition. It is equipped with sensors that are laminated seamlessly onto the material, allowing you to check your well-being and stress level. Jasna Rok also showed her own creations, presenting her customised and exclusive work uniform for the Suicide Club, the first rooftop bar in Rotterdam. In addition to this, she showcased an interactive installation - designed together with the Belgian firm Soulmade - in which their ‘holovice’ was combined with the Exaltation, a dress connected to the brain in which a holographic demo allows you to see how the futuristic dress looks on you. This dress is designed with an extra coating, making it hydrophobic as well as water and stain resistant.

With her innovative collection, Jasna Rokegem sent a message to the general public, that “integration of technology in fashion is already here, but awareness of it is still necessary.” 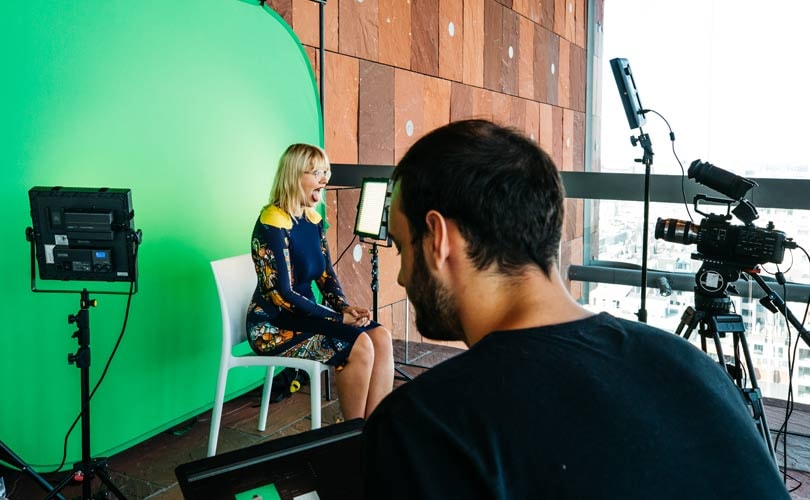 RetailDetail: shop of the future.

That is what RetailDetail, the B2B retail community in the Benelux, also wants to make clear to entrepreneurs in the fashion world. As a special gesture to SuperNova, RetailDetail opened its doors to the general public for the first time. In the Innovation Centre retail-hub, retailers, brand producers and service providers got the opportunity to wander and observe an impressive space of 1,250 square meters in which new retail trends and technological applications interacted, such as multi-sensory experiences, RFID & beacons, 3D-body scanners, facial recognition, holograms, smart interactive mirrors and more. “We are developing products for the consumer who is looking for new ways in the future of living, working and consuming, and we confront the retailers with this new phenomena. Retailers still think that the nearest store is a physical store, while in reality it is now the smartphone. The online and offline world must start to intertwine far better and that is possible with technology,” says Katrien Huygens, business unit manager at RetailDetail.

A nice example of this is an interactive fitting room for merging the online and offline shopping experience into a new and interactive way of shopping. “When entering a fitting room, the mirror becomes an interactive screen that enables you to see nice ideas that you can combine with the clothing item that you're trying on. You can admire yourself in 360° and communicate with the store staff with a single click,” says Katrien Huygens. 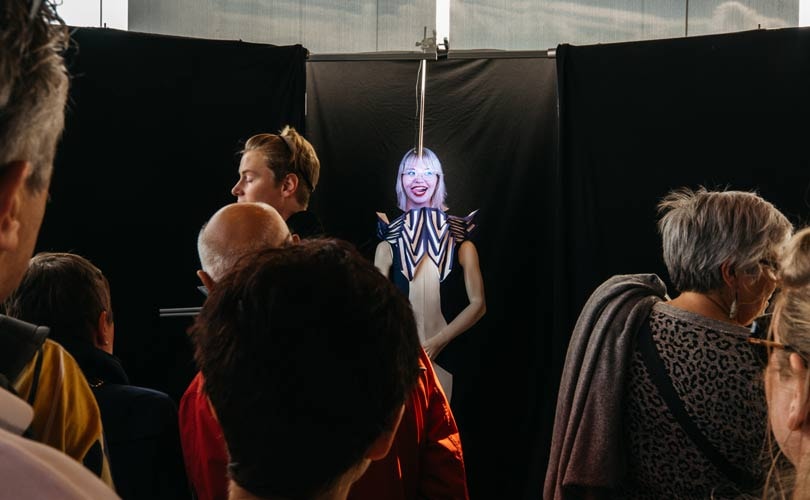 The digital aspect has a strong presence, but the personal contact with the store staff is crucial. Van de Velde is one of the few Belgian fashion enterprises that experiments with the interactive fitting room in its own boutiques in the Netherlands and Germany. Instead of a classic styling session with manual size measurements, the 3D mirror calculates your exact size based on your height and provides suggestions for looks from the collections that best match your taste. In addition, in the retail-hub, Van de Velde introduced a prototype of a newly developed interactive mirror. “Based on an uploaded photo of yourself or an item of clothing, the mirror suggests lingerie sets based on colours in your outfit. This is a first prototype in order to examine the wishes of our consumers,” an employee of Van de Velde tells us.

Technology can also satisfy the fashion consumer who wants the fashion world to be at their beck and call. “Signify Philips has developed lighting that corresponds with the app and can guide you in the physical store directly to the clothing item that you spotted online. You don't lose any time walking through the physical store to look for that particular item,” states Huygens.

Finally, the technology enables you to preemptively discover any pitfalls in the set-up stages of designing a physical store through the use of a VR headset. With this innovation, you can virtually explore the physical layout of the store in order to observe whether interaction with the customers, visitors and passersby is used effectively.

Thanks to SuperNova, it has become clear that fashion and technology can help to develop and reinforce each other’s future growth with the shared goal of innovation in mind. Technological progress is only possible if online and offline intertwine. The awareness is growing, but we’re not quite there yet. Let’s hope that at SuperNova events to come, the awareness will become routine.

This article was originally written for FashionUnited.BE by Christin Ho. Translated and edited by Huw Hughes