Black leather and bondage at Tom Ford and Christopher Kane, bright colours at Burberry and Roksanda -- London Fashion Week offered the full spectrum on Monday of how to dress up. Ford is always a highlight but the US designer increased the heat this season with thigh-skimming frocks and 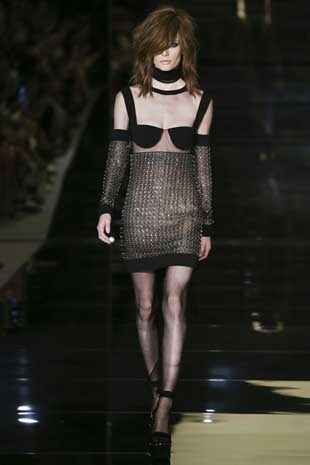 adies of the night were a stark contrast to the fresh and colourful look at British luxury label Burberry Prorsum, which took a more conventional take on spring/summer with a collection entitled "The Birds and the Bees". Kate Moss and Cara Delevingne, the faces of its new campaign, were in the front row as the models walked out in a succession of coats, layered tulle dresses, denim jackets and draped skirts in poppy red, fern yellow, dragonfly blue and beetle green.

Burberry's classic trench coat was reinvented once again, decorated in bold prints taking inspiration from scrawled text and insects and flowers, while floaty sheer skirts were dyed with a range of colour tones.

Bold colour was also the name of the game at Roksanda Ilincic's eponymous brand, using man made fabrics such as neoprene in eye-popping orange, pink or blue, contrasted with soft natural fibres such as silk organza.

Half the collection consisted of frocks, boyish trousers, sleeveless shirts and oversized coats in just one or two colours, embellished only with exaggerated sculptural folds and the occasional scatter of plastic trinkets sewn onto the fabric.

Elsewhere there were viscose skirts, dresses and tops in geometric photographic prints, for what the Serbian-born designer said was a collection designed for the "ease of summer". With full collections expected at fashion week twice a year, not to mention the rolling demands of accessories, pre-collections and menswear shows, the pressure on modern designers is relentless.

But Ilincic insists she has no shortage of ideas, and is encouraged by her four-year-old daughter, who watched the show and afterwards made her mother laugh by putting her hand on her hip and striding down the empty runway. "In a way you get into a flow. The inspirations come one after the other because often in one collection you don't manage to express everything you want to, so you can carry it over," Ilincic told AFP.

Elsewhere, Scottish designer Christopher Kane drew a path between the fresh and the fiery with a show paying tribute to Louise Wilson, his formidable former teacher at Central Saint Martins fashion college who died earlier this year.

Kane has been one of the hottest tickets in town since his graduate show in 2006, and is building his eponymous label into a major brand -- aided by the investment of luxury French group Kering which bought a 51 percent stake last year.

"There were dresses that I was making then, things that were not shown, that featured coils, cords and ropes. I decided to revisit them, that simple cord idea sparking other thoughts," he said in the show programme. The result was a sophisticated collection of cocktail dresses, sheer tops, pleated skirts and jackets with a variety of cord designs, in a palette spanning rich bordeaux, sky blue, black and cream.

There were graphic prints of rows of rope, actual drawstrings nipping in the waist, loop-effect necklines and embroidered coils on sheer fabric. Kane has come far since the neon mini-dresses he produced at college, but he has not lost his naughty side. The cord motif, he said, is a "subtle note to bondage".(Alice Ritchie, AFP)