Protests in Hong Kong, an economic slowdown and anti-corruption drive in China and a coup in Thailand: Asia is no longer a market of constant growth for luxury goods firms. LVMH, world number-one in the sector and owner of brands like Louis Vuitton, Givenchy and Dior, saw its sales drop by 3

In every other market, LVMH's sales increased, according to figures published last week. Even activity in sluggish 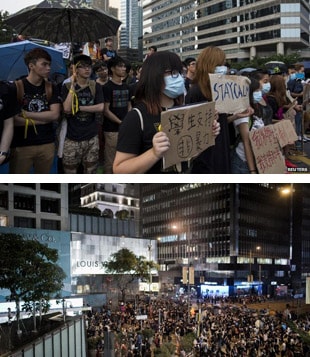 Europe has done better over the past nine months, the group said.The crisis in Hong Kong "will have an impact" on the quarterly results, group finance director Jean-Jacques Guiony said. "We have already noted some negative impact on activity in duty free shops in the third-quarter."

Arnaud Cadart, an analyst at CM-CIC securities, said there was a "rare coming-together of economic, monetary and geopolitical factors that have had a negative impact on the Asian market." Slowing economic growth in China, along with a clampdown on lavish spending by government officials, is crippling luxury goods firms that are used to viewing the growing pool of wealthy and brand-conscious consumers in the world's number two economy as a cash cow.

Consultants Bain & Company have forecast that the luxury goods market in China will contract for the first time ever this year. This will have a clear impact on companies like Switzerland's Richemont, Britain's Burberry and Mulberry and Italy's Prada, and many luxury brands are reining in their previously rapid expansion. Bain said the slowdown in China, combined with other factors, would put the brakes on the global luxury-goods sector, which the consultancy now sees growing at two percent in 2014 -- what it called "the new normal."

Cadart noted that the Chinese market has carried the sector for several years and "couldn't keep up such a pace in the long-term." While rich Chinese clients are still seen as the big spenders, these days the big spending tends to be on holiday rather than at home. Still, that's not to say all luxury firms are putting the skids on the breakneck pace of expansion in China.

Hermes cut the ribbon on a glittering new store in Shanghai in September, and the shoe still also fits for Jimmy Choo, whose initial public offering (IPO) launched in London this week was aimed at raising cash to tap into demand in China and Japan.

Luxury goods firms have also complained that a drive to stamp out lavish and ostentatious spending has dried up sales of cognac and expensive wines as well as items such as watches, traditionally given as presents. LVMH said revenues in its wines and spirits division dipped 7 percent in the first nine months of 2014 from a year earlier.

Luxury goods sectors in other countries in the region have also taken a hit from Chinese tourists staying away for a variety of reasons, including a military-backed coup in Thailand in May. Singapore has seen luxury goods clients cut by a fifth, according to Bain. But the biggest dent in the sector is likely to come from the ongoing protests in Hong Kong, a global centre for luxury watches and the high-end goods market in general.

Normally, the industry can count on around 10 to 12 percent of its turnover coming from Hong Kong, and as much as 20 percent for watchmakers such as Richemont and Swatch. In addition to LVMH's warning about the effect of the protests on profits, watchmakers are already feeling the pain. Retail sales have declined by up to half in the past few weeks, as protesters clog up Hong Kong's streets and clash with police in the biggest democracy rallies since the former British colony was handed back to the Chinese in 1997.

The drop in sales in Asia is also having an impact in companies' home markets. Tag Heuer watches, part of the LVMH group, has decided to make 46 people in Switzerland redundant and Cartier will put people on shorter working hours from November. The only bright spot? Japan, where the market in luxury goods is actually growing, even though Japanese clients have lost some purchasing power due to a weaker yen. ( Audrey Kauffmann, AFP)