of a handbag and another of a woman creating the folds of a wallet. The wording of the ads suggested that each product was made by hand, when in fact sewing machines were also used. 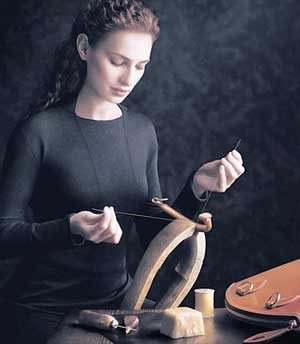 The Advertising Standards Authority (ASA), an independent watchdog which investigates complaints from the public, ruled that the ads breached its truthfulness code and were misleading. Referring to the first ad, the authority said: “We considered that consumers would interpret the image of a woman using a needle and thread to stitch the handle of a bag in ad (a), alongside the claim ‘... infinite patience protects each overstitch ... One could say that a Louis Vuitton bag is a collection of fine details. But with so much attention lavished on every one, should we only call them details?’ to mean that Louis Vuitton bags were hand stitched.”

The ASA also considered that the image of a woman handcrafting a wallet using a basic manual tool would be understood by consumers to mean that Louis Vuitton products were handcrafted throughout most or all of the entire production process.

The fashion house was ordered to pull the plug on its ad campaign after it received several complaints on its production techniques and failed to provide sufficient documentation detailing the full extent of its production process.

The ASA acknowledged that the images were stylised interpretations of real stages of the production process but concluded in its ruling: “We noted that Louis Vuitton had provided training materials and tables which outlined the manufacturing processes for some items. We noted from that documentation that various handcrafting techniques were used as were sewing machines. However, we also noted that we had not seen documentation that detailed the entire production process for Louis Vuitton products or that showed the proportion of their manufacture that was carried out by hand or by machine. Because we had not seen evidence that demonstrated the extent to which Louis Vuitton products were made by hand, we concluded that the ads were misleading.”

Louis Vuitton, part of the LVMH group, argued that hand sewing machines were used for some aspects of items because they were more secure and necessary for strength, accuracy and durability. They also reasoned that the use of hand sewing machines and the associated tasks were part and parcel of what would be expected to amount to "handmade" in the 21st century.

Addressing the ASA ruling, the company said it supported the decision and released the following statement: "This decision is not about the truth of the claim—but whether there was sufficient documentation available to prove to the ASA the 'extent to which LV products are made by hand.'"