In a past life, he dressed Jackie Kennedy and designed fashionable hats. Since then, Bill Cunningham has become a living legend of street fashion photography, a discipline he is credited with creating. His passion is still his obsession: capturing the look.


With a watchful eye, a blue workman's shirt worn over his slightly arched back and a camera slung around his neck, Cunningham -- at 85 -- has the manners and vocabulary of a man of his time. The New York Times photographer calls anyone "kid," no matter what their age. When you speak to him, he focuses on the question and listens carefully, sometimes cupping his ear. 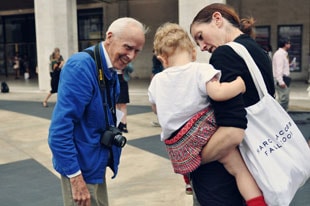 Rare are the fashion personalities today who -- like Cunningham -- can boast of always being fashionable, or predict what will be the next craze. In a 2010 documentary about Cunningham, Anna Wintour -- the powerful editor of American Vogue -- marveled at his ability to "see something -- on the street or on the runway -- that completely missed all of us. And in 6 months' time, that will be a trend!"

The discreet man, born in Boston in 1929, "doesn't say much," InStyle magazine editor-at-large Hal Rubinstein told AFP after a spring-summer 2015 show during New York fashion week. "His wealth of knowledge is absolutely staggering and he is self-effacing. He knows exactly who he is, he is nobody else's guy but his own... It's beyond scholarly."

While Cunningham's decades shooting street fashion have helped him develop an encyclopedic knowledge, the years seem not to have diminished his greatest talent: the art of unearthing major, even avant-garde, trends on the street, on the catwalk or at glittering parties. An omnipresent figure who often travels by bike, from Fifth Avenue and 57th Street to New York's fashion shows, Cunningham also visits Paris Fashion Week -- wrapping up on Wednesday -- to "educate the eye."

The intense media scrutiny on Cunningham frustrates him greatly. In an interview, he said that it "brings too much attention" to his work, and destroys it, in some ways. An oddity in a world revolving around ego, flamboyance and individuality of style, a world in which starlets and bloggers vie for the limelight, Cunningham only aspires to one thing -- being "invisible." 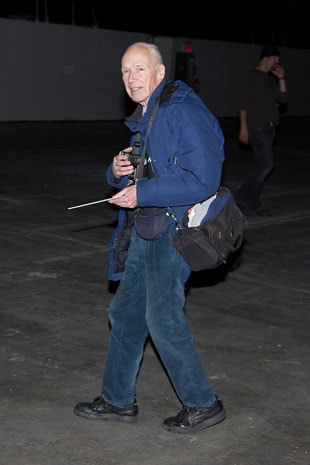 let the street talk to me, and that's how you get it," he says. Cunningham modestly claims he is "not a good photographer." But his work captures pure fashion moments -- the elegance of a woman jumping over a puddle of water, or a dandy sporting a hat as he crosses the street.

Cunningham describes his approach in simple terms: "Not to have an idea first, but to go out and let the street speak to you." He launched his career as a milliner for New York high society. In 1963, he was working at Chez Ninon, a small couture house, when regular customer Jackie Kennedy had a red Christian Dior suit flown to him before the funeral of her assassinated husband.

"There wasn't time to get the fabric and to make a new suit, so overnight we dyed it in black," Cunningham recalled during a conference in New York earlier this month. His first shots of unknown women and celebrities, including actress Greta Garbo in 1978, helped him land a regular column in The New York Times, "On The Street," where the latest trends are featured each week.

Over the years, men in skirts, leopard print, blouses for both day and night and a kaleidoscope of colors have been showcased. "I would absolutely consider Bill Cunningham to be the founder of street style photography," said Brad Paris, who teaches photography at the prestigious Fashion Institute of Technology in New York. "Other photographers may have been covering street style before Cunningham, but he really made it his own with his consistent vision."

And his work has given rise to the fashion blogger. "Photographers like Scott Schuman (of The Sartorialist blog) were directly influenced by Cunningham's spreads in The New York Times," Paris added. "Cunningham's column led, eventually, to the idea that anyone with a camera, a WordPress account and a few ideas about fashion can influence the fashion world. "Cunningham showed the possibilities of street style and created the environment in which it can be taken very seriously." (Prune Perromat, AFP)