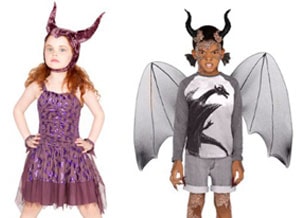 The collection inspired by the characters and visuals of the film, which is based on the untold story of the iconic villain from the 1969 classic ‘Sleeping Beauty’, includes eight “playful” styles for boys and girls aged 4 to 14 years-old.

According to the designer, the collaboration was initiated by the film's star, Jolie, who invited her to visit the set of the film. "I've always been a huge fan of Disney growing up, as was my mother, and I grew up watching all the films like most kids did," McCartney told WWD. "When the opportunity presented itself and I was invited by Angelina Jolie to visit the film set, I jumped at the chance."

The range includes contrasting pieces from feminine princess-like dresses and sandals to dark edgy t-shirts and sneakers, with prices ranging between 42 and 105 pounds, with 10 percent of sales going to charity SOS Children's Villages, which provides homes for children in need.