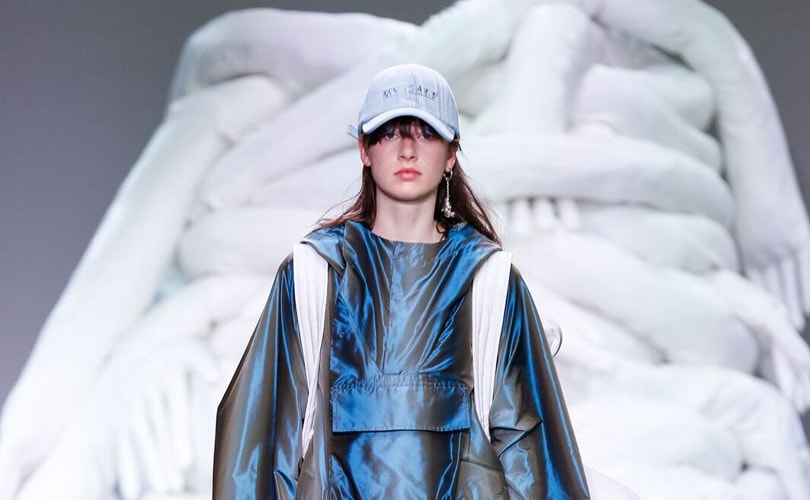 Let’s get connected. For her spring/summer 2019 runway show and collection, designer Feng Chen Wang explored themes of human connectivity and the idea of our other halves. Our other half could be a person, our careers, or something else. At the end of the day, we all have something that makes us whole.

At the center of her runway was a sculpture made of oversized gloves. Though it might seem like a modern art addition, hands and touch symbolize human connectivity, so it was sensibly on theme. The collection also featured backpacks and handbags in the shape of giant gloves. 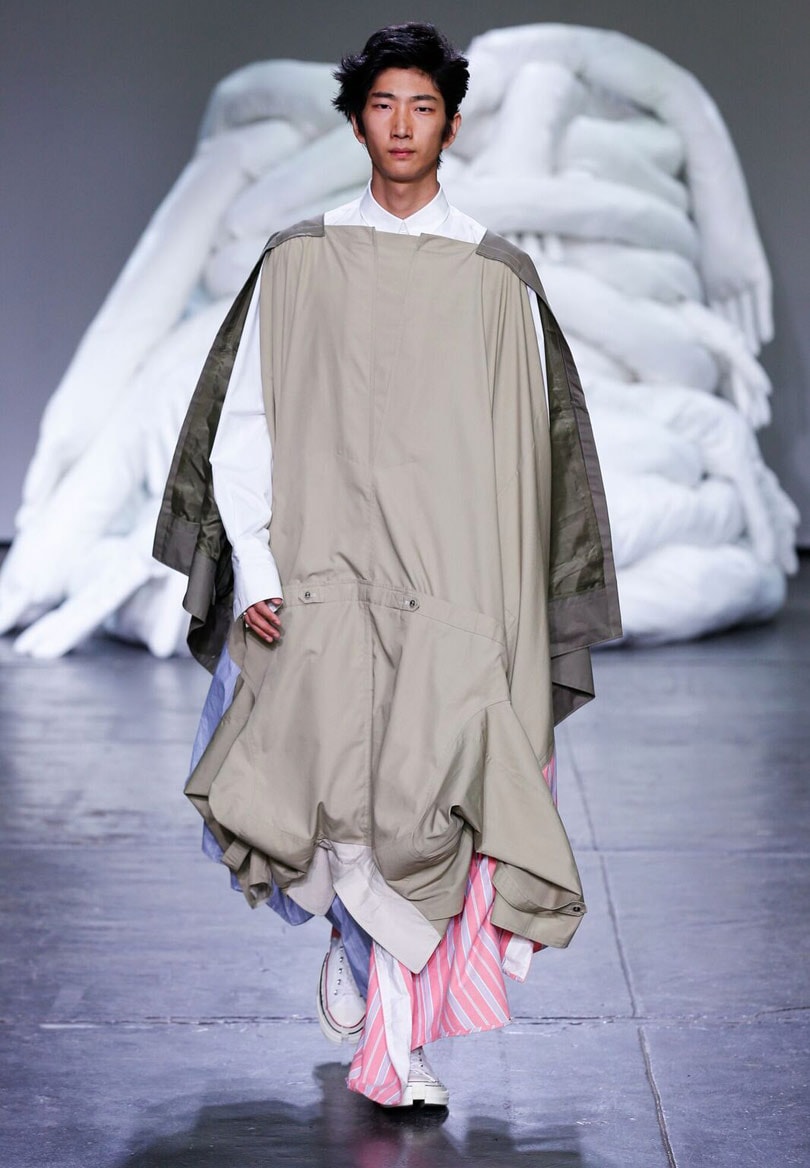 “Everyday we wear clothes, it presents who we are, which is very important,” Wang said to FashionUnited regarding how people connect through fashion. Connectivity was seen in the literal fusion of pieces, where two different garments became one. Shirts were draped on top one another, and denim jackets that were a part of Wang’s ongoing collaboration with Levi’s were layered together too. Jeans had additional legs melded to them, and the shoes, which were an iteration of Converse’s iconic Chuck Taylor styles, saw two pairs cut up and spliced together.

This season designers at NYFW: Men’s have been focused on the theme of us coming together as a people. While the world might seem more divided than ever, fashion has the ability to unite us all. We all have to wear clothes, it’s a universal language. 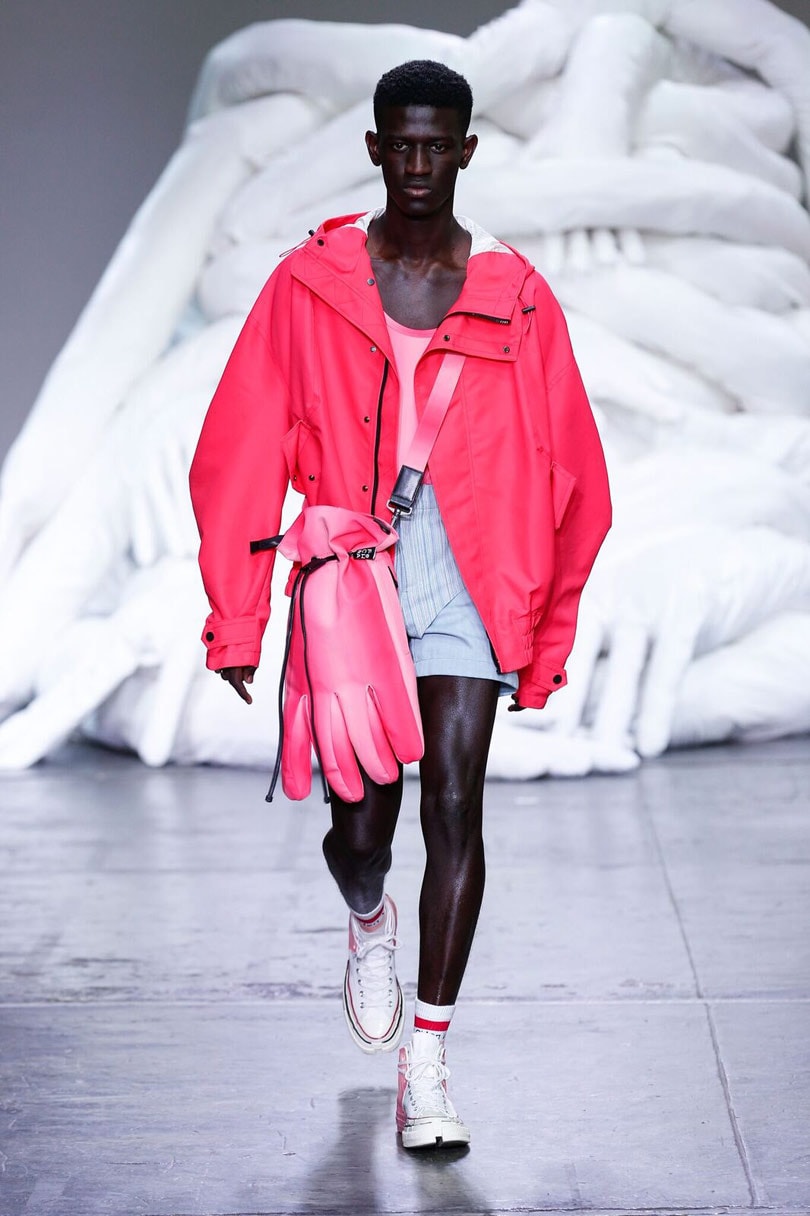 Feng Chen Wang found inspiration in our other halves

The growth in the streetwear market has also been great for Wang, who has a growing fanbase of streetwear lovers. “It’s been great focusing on my collection, and our own things we bring to streetwear,” she said to FashionUnited. “We bring our own ideas, own attitude, and tell our own stories.”

This season that story also grew to include suits, shirts, and outerwear styles such as trench coats. This season, Wang also introduced womenswear, as she has further expanded her business. Although her brand is global, with major business in China, New York has been a big part of her inspiration and branding. 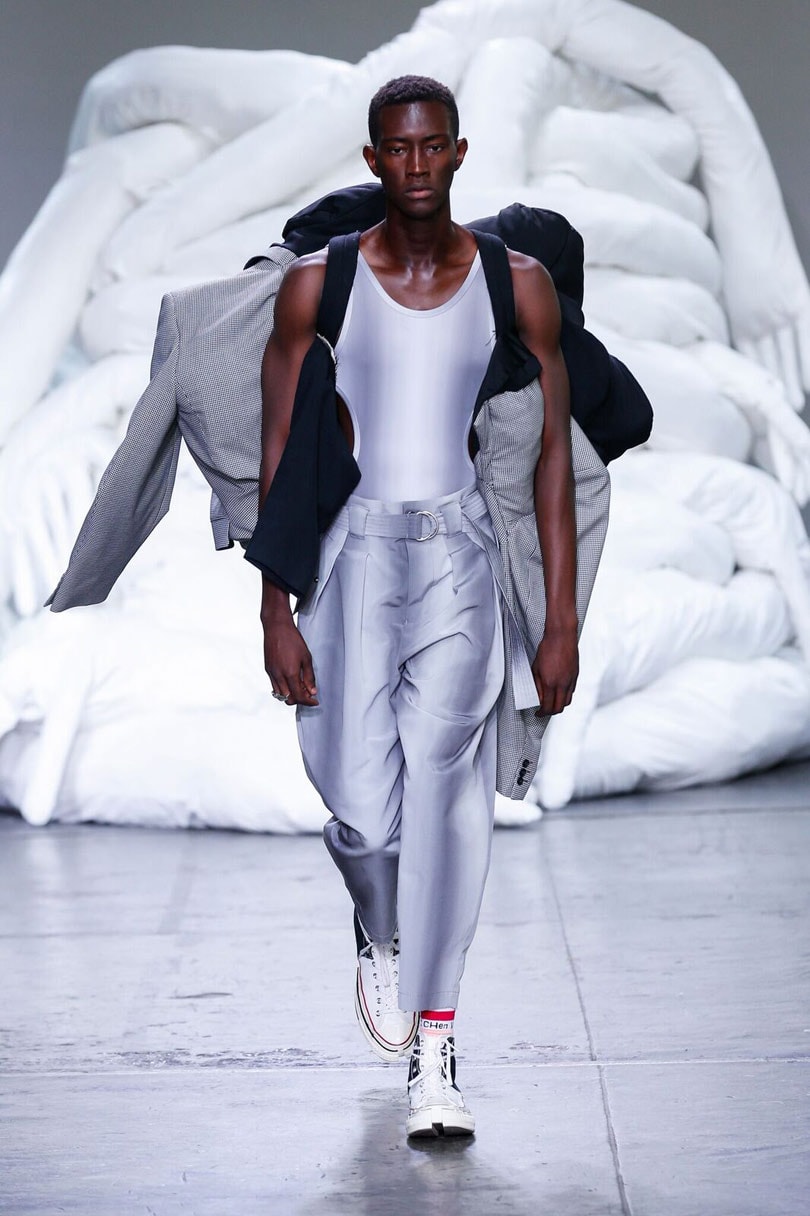 “I always look at New York things, New York themes and New York life,” Wang said to FashionUnited. “There’s always a link between previous collections. I’ve been thinking about hands since last season, and this season we did them in a different way. Body part language has helped us show the people between people themes.”

Wang was also inspired by diagrams mapping the increase and decrease in temperature throughout the human body as we experience different emotions. She explored the phenomenon of loving warming us, depression cooling us, and anger igniting our upper body through PVC pieces that related to these different emotions, and in hyper-color style coats that illustrated this effect.

The color palette included black, white, grey, pink and blue with warm colors juxtaposed against cool colors symbolizing a sense of yin and yang. Every whole has two halves as we learned from Wang.