Abandoned? The impact of Covid-19 on factories and garment workers

There are few jobs that are as unpredictable and dangerous as that of a garment worker. When things are going well and orders come in, it means time pressure, piecework, verbal and physical abuse at the workplace and still no living wage. When things are not going well, it means cancelled orders leading to job loss, no severance package, no social or financial net. In other words, the road to poverty.

After the global coronavirus outbreak, things are not going well, quite badly in fact, for many garment workers around the world, but especially in low-wage garment producing countries in Asia. As fashion stores in developed markets have had to close temporarily, demand for clothing has fallen accordingly. Brands and retailers have reacted quickly and cancelled or postponed their orders. In many cases, they have even refused to accept and pay for goods that have already been produced for them.

Suppliers in those countries have been hit hard: According to a research report by Penn State University's Center for Global Workers' Rights (CGWR), thousands of garment factories have already shutdown partially or completely and millions of garment workers have been sent home, often without the legally-mandated pay or severance.

A CGWR online survey of Bangladesh employers, administered between 21st March and 25th March 2020, reveals the “devastating impact” the cancellation of orders has had on the factories and their employees: “Crucially, it illustrates the extreme fragility of a system based on decades of buyers squeezing down on prices paid to suppliers: factory closures, unpaid workers with no savings to survive the hard times ahead, and a government with such a low tax revenue that it has very limited ability to provide meaningful support to workers and the industry,” states the research brief.

The survey revealed that more than half of Bangladesh suppliers have had the bulk of their in-process, or already completed, production canceled since the coronavirus pandemic took hold. This is despite the fact that buyers have a contractual obligation to pay for these orders. “Many are making dubious use of general force majeure clauses to justify their violations of the terms of the contract,” finds the report. 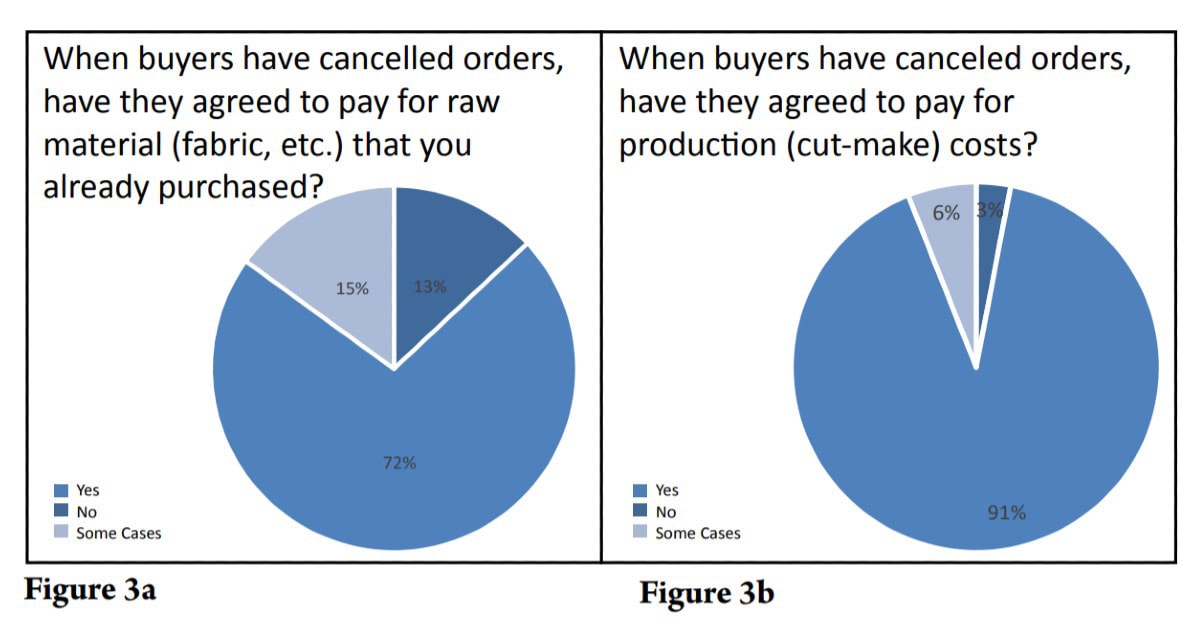 Another consequence is that more than one million garment workers in Bangladesh have already been fired or temporarily suspended from work. The survey also clearly showed that almost all buyers (98.1 percent) refused to contribute to the cost of paying the partial wages to furloughed workers that the law requires. Consequently, 72 percent of the workers had to be sent home without pay and more than 80 percent without their severance pay. This despite the fact that many brands have “responsible exit” policies, in which they commit to support factories in mitigating potential adverse impacts to workers should they decide to exit.

The report concludes with recommendations by the CGWR, which do not only apply to Bangladesh but all garment-producing countries. It points to the fact that the crisis has hit the bottom line and cash reserves of brands and retailers but that not all parties are equally situated to find the liquidity needed to cover their expense. Thus, the report sums up, “the hit on supplier factories, who generally operate on paper-thin margins and have far less access to capital than their customers, is that much more extreme. And the burden on workers – who very rarely earn enough to accumulate any savings and who still need to put food on the table and possibly cover unforeseen health expenses – is enormous”. 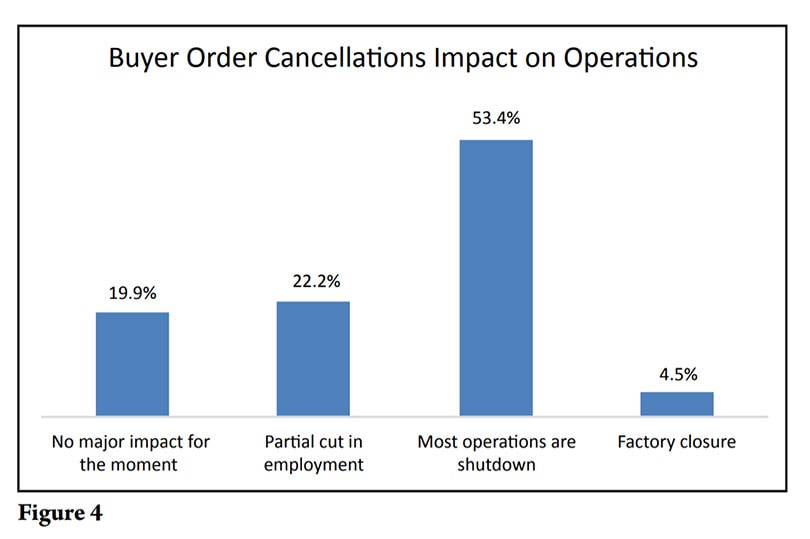 Thus, the CGWR recommends that companies with the greatest ability to procure loans and benefits from government bailouts share those with their suppliers. Suppliers, for their part, must also ensure that payments received from buyers are used to cover all legally mandated wages and benefits, including severance payments to dismissed workers.

At the same time, the governments of garment-producing countries, for example Bangladesh, should continue to mobilise all the resources at their disposal to subsidize suppliers and provide wage support to all workers during the crisis.

Looking at the future, buyers should learn from this crisis to revise purchasing practices to ensure proper social and environmental sustainability. This includes order stability that allows for proper planning, timely payments of orders and full respect for workers’ rights as well as a costing model that covers the full range of social compliance including living wages, benefits, severance pay, building safety, etc. In conclusion, the CGWR reminds the industry that trillions of dollars are currently made available in aid for businesses and workers in developed countries and that the cost of maintaining the income for the world’s garment workers represents only a small fraction of this.

On the buyers side, some appropriate steps are currently being taken. For example, Swedish fashion group H&M has committed itself to stand by its manufacturers: “We will stand by our commitments to our garment manufacturing suppliers by taking delivery of the already produced garments as well as goods in production. We will of course pay for these goods and we will do it under agreed payment terms. This is in accordance with our responsible purchasing practices and not only the case in Bangladesh, but in all production countries,” said H&M in a statement on Tuesday.

What effect the actions of individual buyers can have can be seen by the response to H&M's commitment: Since then, other major fashion groups such as Inditex, Marks & Spencer, PVH, Target and Kiabi have also decided to maintain their current production orders. Hopefully, other apparel companies, fashion brands and retailers will follow.