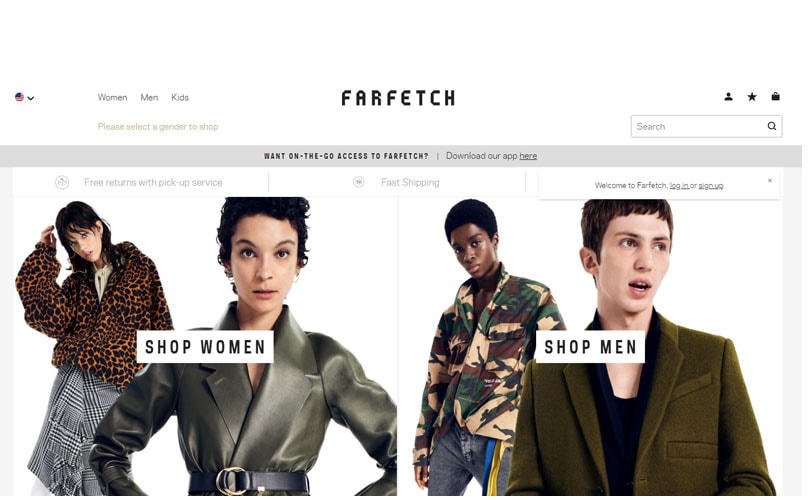 All you need to know about Farfetch’s US IPO

The British online luxury fashion platform has filed a public initial offering of shares with the U.S. stock exchange. Farfetch is thus posed to head the list of September’s IPOs when it starts to trade on the New York Stock Exchange.

Farfetch Limited has just confirmed its plans to go public in an F-1 form filed with the US Securities and Exchange Commission (SEC). The company aims to list on the New York Stock Exchange under the ticker FTCH.

Farfetch first talked about a potential float back to 2016, when hinted that the process of gong public will take them “two or three years”.

All the reasons why investors are excited about Farfetch’s IPO:

A technology business, not a retailer

“We are a technology company at our core and have created a purpose-built platform for the luxury fashion industry. Our platform consists of three main components: applications, services and data,” the company wrote in the filing. Market sources stress that this positioning is reinforced by the choice of the floating market: Farfetch is planning to list in the U.S., the largest equity market for tech companies, instead of in the UK where it is based.

Focus on the luxury market

What also makes Farfetch attractive is that it serves luxury, an area where Amazon.com (AMZN) has yet to make major inroads, highlights ‘Fortune’. In a recent report, CB Insights pointed out that Chanel’s taking a minority stake in Farfetch earlier this year is yet another sign that the online luxury market is heating up. According to the IPO’s filing, the luxury e-tailer closed last year with 935,772 active customers as of December 31, 2017, up 43.6 percent in a year.

Some luxury houses such as Richemont, Burberry or LVMH have been actively investing in luxury fashion marketplaces to help shore up their e-commerce capabilities. That’s yet another indicator that Farfecth’s “strength as a luxury e-commerce marketplace and its additional luxury-as-a-service offering will help FarFetch position itself as a tech company that is catalysing and disrupting the luxury segment,” concludes CB Insights in a report issued in March 2018.

“For luxury sellers, we facilitate connection to the deepest pool of luxury consumers across the world,” explains the company in the corporate statement. “Aggregating a large number of luxury sellers requires long and careful relationship building and acts as a significant barrier to entry. We have carefully nurtured these relationships for a decade. Our Marketplace model allows us to offer the broadest and deepest selection of luxury fashion available.”

As the soon-to-be-public luxury e-tailer outlines in its filing documentation, new generations of global luxury consumers account for a larger share of spending, they are fundamentally changing the way luxury products are purchased. According to Bain & Company’s Luxury Goods Worldwide Market Study (Fall-Winter 2017 and the Spring 2018 update), Millennial and Generation Z online shoppers accounted for approximately 85 percent of the growth in luxury fashion in 2017, and they are expected to make 45 percent of total luxury fashion spend by 2025.

The unstoppable rise of emerging markets

Farfetch has made the world its playground, accounting for a truly global demand for luxury fashion. Consumers of luxury fashion have traditionally been from Europe, the Americas, and Japan. Over the next decade, the growth of the global luxury goods market is expected to be significantly driven by demand from emerging markets, including China, the Middle East, Latin America and Eastern Europe.

As of June 30, 2018, the Farfetch Marketplace connected over 2.3 million Marketplace consumers in 190 countries to over 980 luxury sellers. “We connect a global consumer base to the highly fragmented supply of luxury fashion, and we have established ourselves as the innovation partner to the luxury industry,” affirms the company in its IPO’s statement.

The power of a good challenge

Farfetch said in its initial public offering prospectus filed in late August that in fiscal 2017, its revenue rose 59 percent to 385 million dollars. Based on a target equity value of 5 billion dollars and estimated sales of 358 million dollars in 2017, Farfetch would be valued at 14.0x price/sales, calculates analysts at CB Insights: “The sales figure assumes a 74 percent growth rate for Farfetch last year and a 1.36 average exchange rate, both the same as in 2016. That is far more expensive than Amazon, which currently trades at 4.3x sales in 2017.”

The Farfetch Marketplace is the first and largest application built on the company’s platform and is currently the source of over 90 percent of the revenue. It’s worth recalling that Farfetch