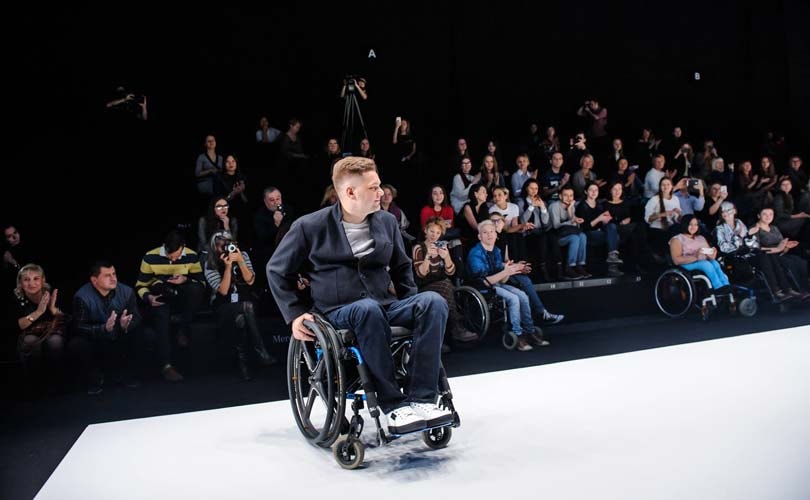 Fashion for the disabled gears up for a positive road ahead

One in five American adults, or 53.3 million people report having disabilities, a Center for Disease Control and Prevention report states. However, among the 1.2 trillion dollars global fashion industry, wherein over 250 billion dollars are spent annually on clothes in the United States alone, brands and designers aren’t investing in fashion for the disabled. The segment is witnessing some positive developments with designs being created specifically for people with disabilities on a small scale, however pricing continues to remain a major issue.

We love seeing companies like @zebedee_management repping models of all abilities. Have you joined the RODF look book yet? DM if you're interested in hearing more.

Big brands yet to fully cater to this segment

According to industry research, trouble with mobility, cognition and living independently are the three most common types of disabilities and for people who are looking for options to suit their needs, it’s not about well-fitting clothes to make them look good but it’s more about functional and tailored clothes that can make them feel included in society.

While the market has seen some small brands and designers make clothing for people with disabilities, some big brands like Tommy Hilfiger and Nike have also made an effort in fulfilling the needs of people facing physical challenges in their day-to-day lives.

Tommy Hilfiger launched a special children’s collection last year in collaboration with the adaptive fashion-focused organization, Runway of Dreams. Founder of the organisation, Mindy Scheier makes sure that the brands/designers follow the same designs as their original clothes but with modified closures, adjustability, and alternate options for the comfort of the people with special needs.

She launched this project when she failed to find a fashionable pair of jeans for her son, who uses leg braces as a result of muscular dystrophy. A former fashion designer, she spent some time switching a button and zipper fly for magnets, while making sure that pant legs have wider openings and magnetic closures. Her efforts resulted in a collaboration with Tommy Hilfiger, when she presented her ideas for clothing for people with disabilities to the company.

Though Tommy Hilfiger succeeded in creating a ripple in the world of adaptive fashion with its offerings, most of its designs followed a successful line of dress shirts for adults, called MagnaReady. Maura Horton, of Raleigh, North Carolina had designed a MagnaReady shirt for her husband who is battling with Parkinson’s. She incorporated custom-designed, machine-washable magnets behind the non-functional button flap of traditional button-up shirts, which allowed the wearer to put on and take off the shirt easily and independently. After selling around 20,000 shirts through her online platform between 2013 and 2015, she partnered with PVH Corp in 2016 to develop a collection of Van Heusen men’s dress shirts using the MagnaClick adaptive technology, which were retailed online and offline by Belk, JCPenney and Kohl’s along with etailer Amazon.com.

Sportswear giant Nike, on getting a request from a 16-year-old boy with cerebral palsy, created a sneaker with a wraparound zipper in place of shoelaces and a bigger opening to make it easy for the wearer to wear and remove the shoes. After an online, limited edition launch last fall, the company has introduced the same design in their new basketball and running shoe collections.

Land’s End too has made an effort to fulfil the needs of customers with a mastectomy. The company has created a swimsuit design that includes a raised neckline and armhole of a conventional swimsuit to cover scar tissue or sensitive skin due to radiation and the bra is without an underwire and contains a prosthesis pocket.

Elsewhere, in Russia, Tobias Reisner and Yanina Urusova, the founders of Bezgraniz Couture meaning ‘without borders’ in Russian — have been creating awareness through workshops, educational forums and fashion shows since 2008. The company initially held competitions asking designers to design clothes for people with disabilities. In March 2014, shortly after the Paralympics in Sochi, Bezgraniz Couture launched its first line of adaptive fashion clothing to showcase at Mercedes-Benz Fashion Week Russia. The duo has been part of fashion weeks till most recently in Los Angeles and at Mercedes-Benz Fashion Week Russia, Moscow, on October 23, 2017.

Apart from participating in fashion weeks, Reisner and Urusova in 2014 also launched an art project called Acropolis, wherein models with disabilities replicated the famous figures of the statues of the Acropolis. According to Bezgraniz Couture website, the idea behind this project was to combine the classical spirit of ancient sculpture with the bodies of models with disabilities to showcase beauty redefined by the unique complexities of the human body. Bezgraniz Couture is also working with design schools in London, Russia and the United States to make designs for people with disabilities part of the core curriculum.

Lucy Jones, a 24-year-old fashion designer from Cardiff, United Kingdom, made it to the Forbes list ‘30 Under 30’ in 2016 for her innovative “seated designs” developed for people in wheelchairs. Brazilian designer Christiano Krosh has created a fashionable yet functional line of clothing using Velcro, zippers, hidden openings and even Braille labels for the disabled.

The efforts made by these brands and designers are noteworthy, however according to Luz Pascal, Professor at the Fashion Institute of Technology in New York, they fall short in serving the market in full. Pascal notes what is missing is apparel that’s chic and also injects self-confidence into the wearer.

Though the market for adaptive type of clothing is relatively small at the moment, it is attracting growing interest of design institutes, which are letting students explore various ways of creating affordable and user-friendly clothing. For example, in 2014 the Massachusetts Institute of Technology launched an Open Style Lab to bring together students in design, engineering and occupational therapy to create clothes for people with disabilities.

Also researchers at MIT’s international design center created a specialised fashion line to include fewer sensory triggers such as fraying, rough zippers and scratchy tags for children and adults with autism because of their sensitivity to certain textures and colours.

Outside of the US, students like Sophie Neff at Nottingham Trent University in the UK developed a knitwear collection for people in wheelchairs that includes pockets on thighs instead of the backside of the pants and tight fitting cuffs, to prevent sleeves from getting stuck in the wheels.

And every summer Parsons's Open Style Lab (OSL), a nonprofit organization dedicated to developing clothing for people of all abilities hosts a 10-week research program that brings together these diversely skilled individuals to learn, collaborate and create bespoke clothing for four or five clients with disabilities. 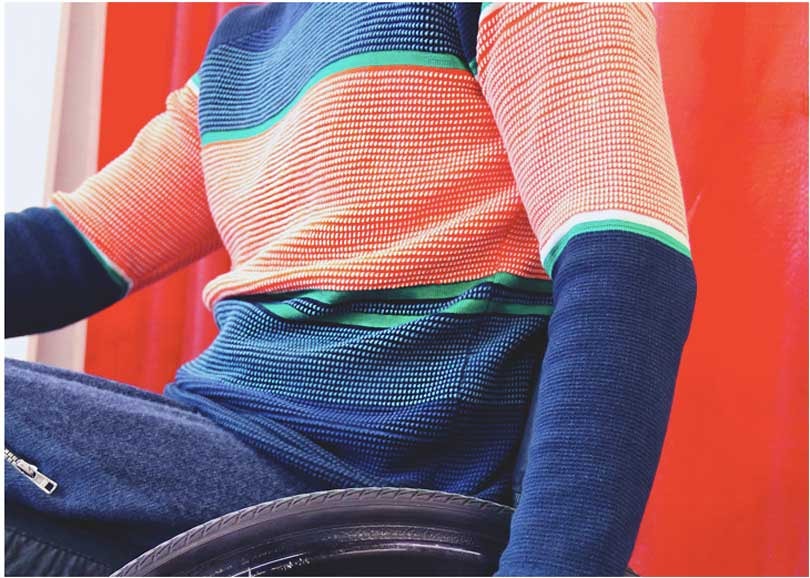 Earlier adaptive clothing lines were mostly created for the elderly, however with young designers trying their hand at such line of clothing, fashionable adaptive clothing has taken birth for both - the young and the old.

Dr. Sheri Prentis, founder of Be Sassy & LIVE, who had clinically disabling lymphedema (persistent swelling) of her right arm, hand and fingers due to rigorous treatment for breast cancer and who had to wear a compression glove and sleeve daily in order to control the swelling, she decided to design her own line of compression garments that are stylish, comfortable and affordable. And Stephanie Thomas born with congenital disabilities on her right hand and feet designed Cur8able, a fashion and lifestyle website, that allowed people with disabilities to style clothes that can be worn independently.

On the retail side, Silvert’s, stocks a wide range of casual clothing, accessories, and undergarments for the disabled and its online platform lets the user select their specific disability and then guides him/her to items specifically designed for their needs. The collection is colourful, stylish designs having clever adaptations like a cardigan having a snap back.

As the name suggests, USA Jeans offers variety of jeans, slacks, and shorts for people using wheelchairs. The line uses variety of materials, ranging from lightweight denim to olive khaki and also offers slim, regular and comfort fits. While the range doesn’t look any different, it does have a high back and low front and pockets and belt loops have been removed because those can lead to pressure sores.

Rackety's has a separate selection of vibrant casual clothes for kids and adults. Able2Wear sells adaptive men’s suits, shirts, trousers and outdoor wear, as well as women’s and children’s outdoor wear and accessories. While their focus is more on people who use wheelchairs, the company also stocks clothes for other disabilities.

Heidi McKenzie began designing special clothing after a car accident in 2007 left her a T4 paraplegic. Her line of jeans, ‘Alter Ur Ego’, is both functional as well as fashionable.

Of many small companies and designers that have been catering to the fashion needs of people with disabilities, some have tasted success, while others had to shut shop. For instance, designer Izzy Camilleri had to pull shutters on her adaptive fashion line IZ Collection last fall owing to falling sales and timid response.

Camilleri, who has dressed celebrities like Angelina Jolie and David Bowie, launched IZ seven years ago when a wheelchair-bound local TV personality requested for a customised piece of clothing. “It’s not a decision that came quickly or overnight,” Camilleri told the Toronto Star, adding, “The growth has been quite slow and it’s been difficult to sustain. We produce locally and ethically, and it’s hard for us to juggle pricing.”

Designer Stephanie Alves launched ABL Denim, a line of special jeans in 2013. She later tied-up with Walmart to sell her jeans for people with disabilities, on its online platform. "Not shipping Walmart our 4th and largest re-order was our strategic decision," says Alves.

“While the range continues to be available on the ABL Denim website, a new version is in the works in order to serve the unmet needs for fashionable, functional clothing that also has a special fit,” Alves told FashionUnited, adding, “We want to be accessible at different price points. From next month, ABL Denim offering a variety of styles for men, women and kids will be featured on Zappos Adaptive, the new, online platform for adaptive clothing.”

The makers are having difficulties expanding their designs and collections. Customisation is often necessary to meet the needs of people with different disabilities and this requires high investments. Orsola de Castro, founder of the nonprofit organization Fashion Revolution, who spoke to the Guardian, hopes the market for people with disabilities will become as viable as the growing segment that touts the use of sustainable and recycled materials. She says: “For this niche market to grow, big brands will have to be willing to accept lower profits and see values in providing an important service. Many doubted sustainable fashion as viable – and look at the growth we’ve seen there.”