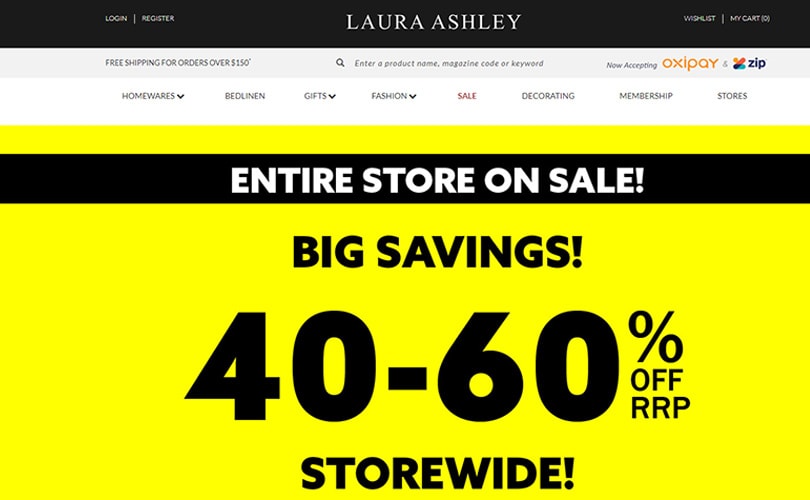 New York – The Australian subsidiary of British fashion brand Laura Ashley has fallen into administration for the second time in barely three years. Laura Ashley entered Australia in 1971 and, at its peak, had more than 45 stores. It still had 38 stores in 2016.

The clothing and home furnishing group, operated under licence from the original Laura Ashley company in the UK, has 18 stores and 100 employees in Australia.

Laura Ashley Australia first fell into administration in January 2016 before being slimmed down and sold to a private buyer six months later. The same company has run the business since.

“The business has been hurt by the same factors affecting many other fashion retailers — a becalmed retail environment, rising fixed costs and fierce competition from online retailers,” Shepard said in a corporate statement cited by Australian media.

The next steps for the struggling retailer are issuing a call for expressions of interest in purchasing the stock and license. “The capital requirements to revive and grow the business became too burdensome as retail conditions became tougher,” further explained administrators.

The closing stores are located in all Australian states, with administrators seeking to discount inventory in the pre-Christmas trading period. The collapse of Laura Ashley in Australia puts around 18 stores and 100 jobs at risk.

The fall has been blamed on rising fixed costs, competition from online retailers, tough conditions and poor capital to revive the ailing business, reports ‘Ragtrader’.

Other retailers falling into administration in the country over the past months include Roger David, Marcs, Pumpkin Patch, Payless Shoes and Rhodes & Beckett.